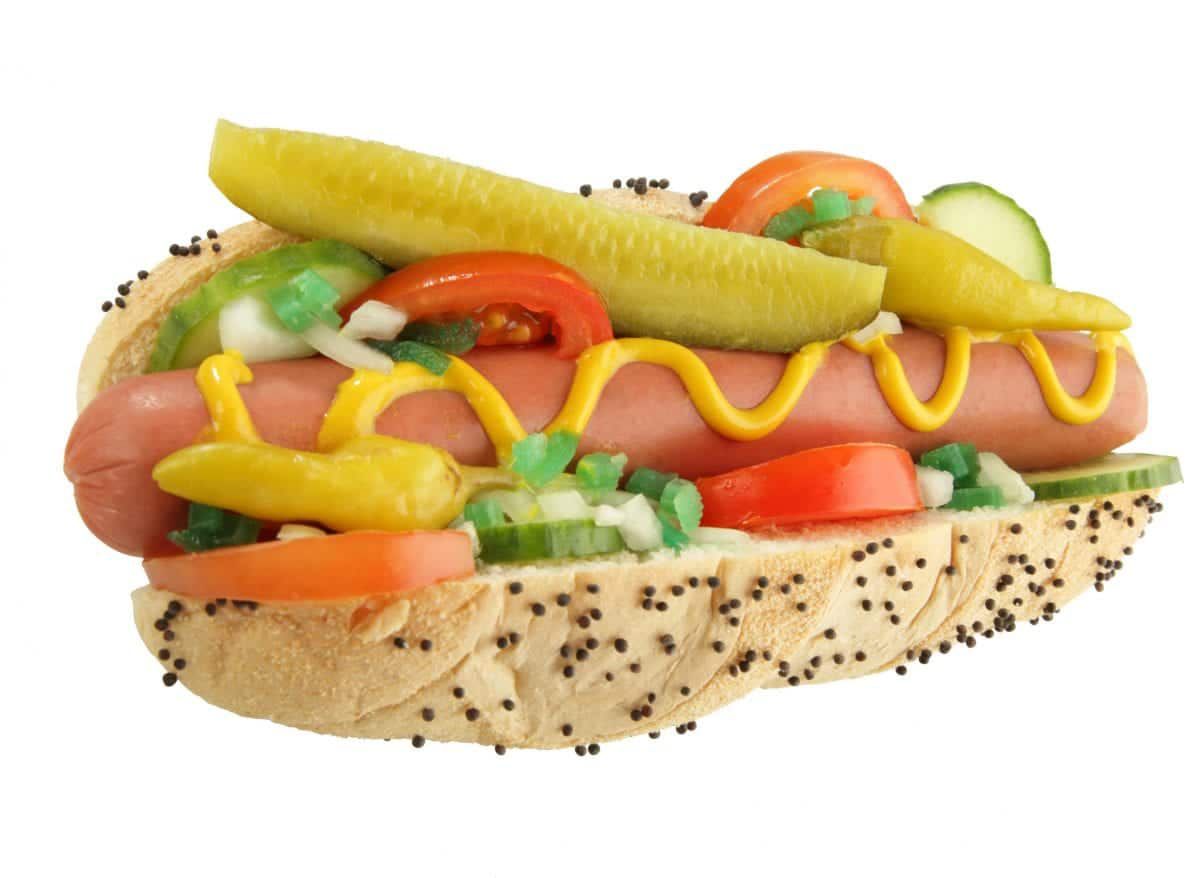 A little story for men about what's really important

There’s a forty-something guy named Sam who sells vegan hot dogs in front of this enormous office building in Chicago. Most of the people who work inside are financial traders. Every day, starting at about 11am, there’s a line formed by his stand. He sells out every day, not long after noon. And if he sells out, honestly, you’ll be forced to consume something lesser.

Not only are these puppies “loaded” with your choice of farm-fresh ingredients, but the sausages and bread are very obviously homemade with a great deal of love. If you get a “Chicago” with everything, it’s one of the most amazing things you’ll ever put in your mouth! Everything down to the pickle has been prepared with the utmost care.

The stand is decorated in a very hip, 70s retro style. The whole thing, including the menu, is hand-painted. Sam’s been overheard saying that a dear friend from college painted it for him. There’s a little sign that reads, “Two Dogs Max! One for you and the one you love!”

He always has a smile on his face. He seems to remember everyone’s name. Watching him put together someone’s lunch is like observing a Buddhist monk. He’s never in a hurry. Each one is a piece of art to Sam, and his customers feel the same way.

Around 1pm each day, he’s sold out and packing up to head home. He’s been performing this same routine for a decade or more. As far as anybody knows, the price has always been the same. Frankly, it’s the best lunch on the financial street. He could charge twice what he does, easily!

One day a young man approached Sam, as he was packing up his cart. He introduced himself as Doug, an “up-and-coming trader” who worked in the building that towered over the tiny hot-dog stand. Doug explained how he had been observing Sam’s business for more than a year from his office window more than 40 floors above the busy street where Sam made his living.

He asked Sam for a moment of his time and then pulled out the most beautiful, detailed business plan anyone has ever seen. Doug explained that he and the others who worked in their division had been stunned at Sam’s ability to sell out of hot dogs every day. He went on to say that they had developed a plan whereby Sam’s stand could be franchised across the city (and eventually across the country), making Sam a millionaire.

In finishing his presentation, Doug said, “…And imagine, Sam, how much time you’d have to spend with your wife and kids! How nice of a home you could buy! “Sam’s Hot Dogs” would be a household name! You’d be rich and famous!”

Sam replied, “Doug, I appreciate the offer, but you see, I’m rich already. I get up at 4:00 every day to meditate and drink coffee with my wife. That’s when she bakes the bread for the hot dogs each day. Then we wake the kids up and get them ready for school together.”

“After I drop them off, I come here and sell the hot dogs. I get finished so I can be home in time to receive my children. I help them with their homework, and amazingly, we’re able to read together for hours each week. We eat dinner together, and after their bedtime, my wife and I always have time to talk and connect.”

“We indeed live in a small home below our means, but I’ve been able to watch every moment of my family’s lives and genuinely invest in my relationship. The kids will leave one day, but the wife is forever, right? I gotta make sure she stays my best friend. I appreciate your offer, Doug, but I’ll have to pass. And excuse me, I have to run. My kids will be home soon.”

Maybe you’ve heard some version of this story before. I’m not the creator of it. I heard it somewhere and embellished it with a few details from my own life because, in many ways, it illustrates the journey I’ve been on for the past couple of decades.

Once upon a time, I was an evangelical pastor. I used to counsel many couples regarding their relationships. Most failing relationships were due to plain selfishness, the inability to see and meet the other person’s needs. In my 15 years in the church, I saw very few successful, long-term relationships. The ones that made it (and thrived) were those where each partner was selflessly serving the other.

I would sometimes lead men’s retreats. As we asked men to talk about issues at home, the number one thing that came up all the time from the vast majority of them was, “I don’t get enough sex,” followed by “At home, I’m not appreciated for my work”. However, when you dug into any of these complaining men’s relationships, what you would find is an exhausted and ignored woman (and family).

Women and children need large quantities of quality time (uninterrupted by electronic devices) in order to thrive. If a relationship is going to grow in love throughout time, the man must master his ability to patiently, actively listen to his spouse. If children are going to reach their spiritual potential in life, a father must invest in them, read to them, and help them form their vision for the future.

“I wish I’d spent more time at work,” said no one on their death bed ever. The most successful people in life are certainly not those with the most money; it’s the people who spend the greatest amount of their time with family, in clarity and satisfaction, who have reached the pinnacle of success.

May I submit to you that it’s often better to sell hot dogs than to be the manager of this or vice president of that?

When you determine what “success” means to you, I trust you’ll choose wisely. I also hope your family agrees with you.

Just Act Dumb
May Your Dreams Be Never Fulfilled