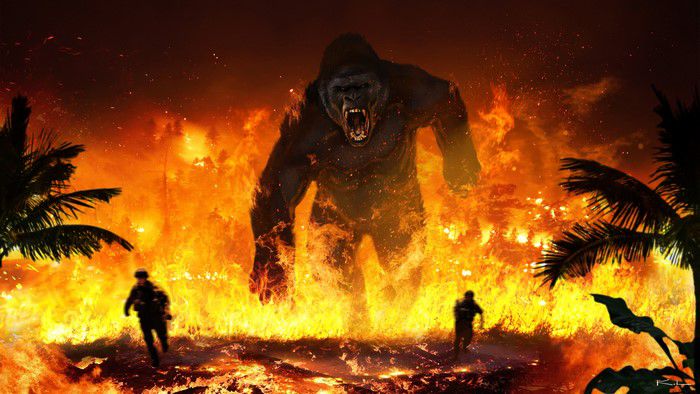 A few weeks back I chanced upon a movie Kong: Skull Island… movie left a great deal of message that those who look tough and stout are not always bad and beast but holds a beautiful heart too. Movie plays around an island which was left undiscovered by humans and mentioned in local myths as Island full of mysterious and wild demons. Where the blood sucking giant spiders and dinosaurs’ size wild lizards and demons of the underworld lived at every step of that island. Though Island looks so beautiful that everybody would love to catch a glimpse of it, but as you walk it’s a place full of mysterious and mythical creatures frightens and threatens and waiting to have a treat of the day.

Here’s this giant ape looking mythical creature, “Kong” whom people and animal living on that Island consider him as their God. As the movie goes, American team of scientists and Vietnam War soldiers once made a project to search about this part of the planet. And they stuffed themselves with guns and bombs and what all explosive substances to fight the unknown demons of the island. As they entered the area they found Kong, as they tried to explore the island by bombing on the surface and Kong noticed it and appeared to protect his people. The army unknowing of the goodness of Kong fired guns and bombs etc, the Kong in return threw away helicopters and crushed them with his big hands like toys.

So, the army was down with all helicopters and explosives and all team was scattered. Some found their teammates and some were lost and eaten by the demons and some found good place to refuge(to take shelter). As it goes people on this island, worship Kong as their God and King and seeks his refugee in savings them from deadly demons. Kong never fails to protect his subjects with all love and grace them with protection in times of aggression and attack by the demons.

A part of the project, a women photographer manages to evoke sympathy and love in his big heart cushioned inside his giant frame and made his tender soul come up. While trying to run away from this deadly Island, they met this deadly gigantic hungry ferocious lizard which started following and eager to eat them but was interrupted by The King Kong who fought hard to protect them and save them from this demon lizard. So, no matter how ugly a creature looks, good soul always shines through. A takeaway worth pondering and taking home. Even animals and creatures feel the same way as we do. So, let’s be kinder and more understanding towards all.