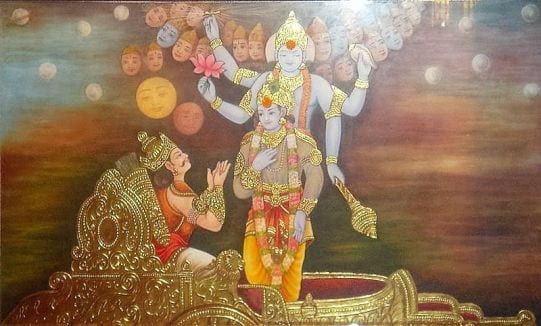 How I Learnt to Recite the Bhagavad Gita

A personal experience and journey.

First, I think it is Divine Grace that I have had the experience of being able to learn and recite this sacred text – the Bhagavad Gita. It is undoubtedly a manual of Life, a masterpiece of words. It is a blessing for anyone who can live by its teachings, understand it or in the least recite it, as I am able to. I say blessing and grace here as the whole effort (or rather experience) of learning the Bhagavad Gita was not a planned attempt. There was definitely a self-drive and discipline I practised (which I will share below). But considering my past, my interests, my mind-set, I would definitely attribute the inspiration and motivation to undertake the effort and the ability to consistently manage the learning process to the Grace and Blessings of Gurus and God.

Since July 2012, I had been chanting the Vishnu Sahasranamam every day. At that time, my family and my cousin’s family were staying together. My cousin had requested a scholar of Sanskrit who stayed nearby to teach us the Gita. This was a time when I would be on tour most of the time. I had no time or interest for spiritual pursuits due to the heavy demands of my work. I would infrequently attend some of the classes, with reluctance (and feigned interest to keep up others’ spirits) more as an obligation to be part of something the family was interested in. The classes stopped and I really didn’t care about it. However, I had at that time done an Internet search and found a complete recording of the Gita by Swami Brahmananda of the Chinmaya Mission. I had downloaded two or three chapters. The exercise stopped at this point.

In 2015, I had an accident which fractured by shoulder. As I was laid up in bed, I had time to think beyond work. By then I had moved out of my business and was working in an organization where work pressures were much lower. With nothing to do in bed, one day, I decided to hear the recorded version of the Gita. I downloaded all the 18 chapters and started listening to them.

I still remember the goose bumps I had when I heard Chapter 11 – the description of the Vishwaroopa. It was a strong feeling of submission. I felt like a small spec in this Universe while the rendition was sounding in my ears. I almost cried.

Later that year on the day of Saraswati Puja, I started my effort of learning. It was still not a planned effort. I just played the Gita Dhyanam shlokas and tried to recite with the recorded chanting. The recording was well paced. It was slow enough for me to say along with very few mistakes. This was in spite of my reading ability of Sanskrit not being very good. I continued chanting the Dhyanam for 10 days along with the recorded version of the Gita. After 10 days, I tried reading it myself and I could do so. In fact, I had almost memorised that part. I felt quite elated.

On the 1st of the next month (October 2015), I took up Chapter 1. I had been told earlier by a priest that a lesson in the scriptures generally spans 14 days. So, I decided to recite along with the recorded version for 14 days. I had done this earlier for the Purusha Suktam and Medha Suktam and had fair success. The month went by. The first 14 days were for chanting along with the recording and the rest of the month for reading without the recording.

With fairly good results, I continued with the 2nd chapter the next month. With the blessing of Gurus, I could do this uninterrupted for the next 18 months. Every month, I would start a new chapter. I would recite the one I had learnt in the previous month and do the new one after that, thereby practicing the previous as well as the new. On weekends, I would recite all chapters that I had learnt so far.

Of course, there were breaks. I think I didn’t chant on Sundays or days when work demanded more attention. But I maintained the monthly cycle of 14 days recital with recording and the rest of the days reading by myself.

During the course of these 18 months, I also downloaded a version of the Bhagavad Gita by Dr. Manish Chandra Prabhakar on Google books. I would read through this during the day during free times. It has brief meanings in English. I would also let the Shlokas run in my head during the day. This helped me memorize most part of the Gita.

At the end of 20 months (April 2017), I had completed all 18 chapters and could read fluently. The rendition by Swami Brahmananda is so beautiful, slow and clearly pronounced that I could do the entire learning with almost no mistakes.

I keep up my practice by reciting one chapter a day, leaving weekends. This takes 3 weeks. At the end of the 3 weeks, I recite the entire Gita, almost by-heart. It’s a wonderful feeling to be able to do this. Every time I finish a complete recital, I feel fulfilled, I feel grateful.

Since there was a request in a Facebook group asking for a one-shloka-a-day learning mechanism, I took up this task. I record and edit for this and post the Shlokas on YouTube (https://www.youtube.com/channel/UCqp4fpg3YiEgnPfWm64Vhyw/featured?view_as=subscriber) and Facebook (https://www.facebook.com/bhagavadgitalearning). While just about 2 or 3 people use this for their learning, I feel it’s just something I must do as a thank you gesture to the Universe which allowed me the good fortune of being able to recite this wonderful composition.

To conclude, I’d like to leave a message that if a person as common place myself can learn the Bhagavad Gita, anyone with a little interest and determination definitely can.

“loss the only truth”
This is not so cool