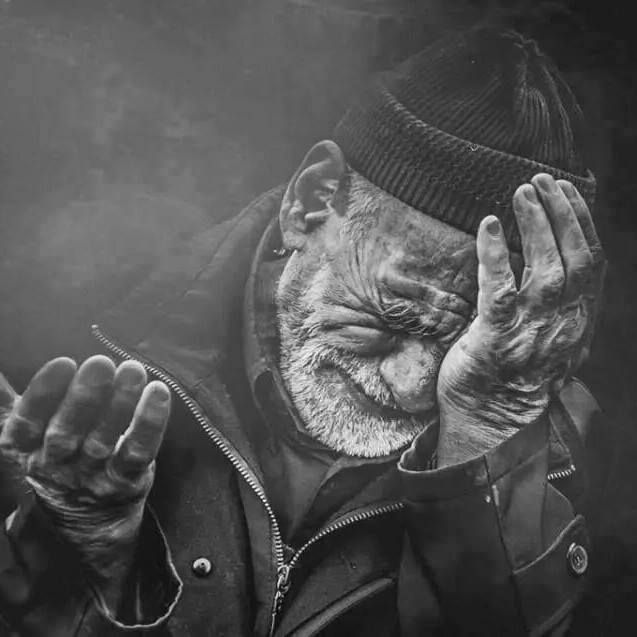 All he needed was a few scraps of food

Mocha slept on the road, unperturbed and uncomplaining. He owned nothing. The breaths left in his collapsing six- feet frame were numbered.  If luck were to turn around for him for the first and the last time, he would want it now. He would not roll his hollow eyes and spit angrily at luck’s mocking face if, only if, this luck could bring him a few scraps of food.

Mocha had not been lucky lately to chance upon scraps of food left in their plates by people frequenting the eateries lining the street –the street which was home to him and to the stray dogs. Lately, the stray dogs, the cats, the rats, the crows and even the sparrows had their share of luck in finding the food.  Mocha salivated at the thought of food and swallowed the saliva back, resigning himself to his destiny. The vultures, the kind mascots of death, were waiting patiently for an impending death were to bring them the feast of their life. Thus, they waited patiently.

Amid this feasting, fasting and waiting- Mocha’s body withered and waned. The bones, in an act of camaraderie, pushed through his dejected flesh, and dramatically surfaced on his body. They rattled, and they clanked to draw the attention of the passers-by to Mocha and his plight. The sight of his unsightly bones begging for a morsel of food drew stares, but not compassion.

There is no spectacle like the spectacle of a human tragedy. Humanity should, at no cost, be deprived of such spectacles.  Undoubtedly, the passers-by showed no mercy.  His hope for some food, only food and nothing else had not deserted him completely.  Likewise, the hope of the vultures for a feast had not lost glimmer and glamour.

It would not bother anyone if a Mocha dies on a crowded street on a busy day. Such streets have seen many such Mochas, and many such deaths. The Mochas who die in the hinterlands of India because they are neck-deep in debt and their farms have not yielded any produce also do not receive any consideration. Then, there are Mochas who die at tender ages because of undernutrition. Their innocent cries also do not penetrate many hearts.  Death engulfs them year after year. The hunger in death’s belly knows how to satisfy itself. Unlike Mocha, who sleeps on the road, unperturbed and uncomplaining, relying on the compassion of passers-by for a few scraps of food, death knows how to claim its food. It has already claimed the lives of many Mochas. Now, its menacing eyes are fixed on our Mocha of the street.

But who was this Mocha of the street? Where was he from? Why didn’t he work and earn money? After all, since time immemorial, we are taught: Earn your bread. So, was this knowledge not passed on to Mocha? Why the passers-by should feed him anything but a few kicks – generously and gladly. Sprinkle the choicest abuses to the platter of kicks and whet the appetite for a human tragedy. Remember- the vultures are waiting.

Once, Mocha used to work- A rickshaw puller. He even had a family-a wife and a three-year-old daughter.
Yes, he had a home, too. He lived with his family in Lal Bagh Slum in Delhi.  He too had his share of happiness, albeit short-lived similar to his naps in the afternoon.

On such afternoons, his wife Fulba would cover his face affectionately with the pallu of her saree and they will dream of their future- plenty to eat and a God to thank everything for. Their daughter, Raunak, frolicked around them and completed their world. The rickshaw stood in the corner and felt happy for his master.

On the night before the fateful day, Fulba and Mocha sat together, and Fulba chided drunken Mocha.

“I will leave you forever if you ever come drunk,” Fulba threw a chapatti on Mocha’s plate.

Mocha caught her hand and did not allow her to get up and leave.

“Fulba, if you go, I die.” He muttered through his breath, filling the air with the smell of booze.

In his drunken stupor, he acted like a teenage boy, head over heels in love.

“Raunak is turning four next week. I want to buy her a new frock. You give me no money for anything.”

“Munni gets her frock. You get a saree. I give money. I earn big.”

He pushed the plate towards Fulba and spread his both arms to show her how much money he would earn.

Fulba could not suppress her laughter.  Raunak came frolicking and completed their world again.

In the morning, Mocha left early so that they could have ‘plentiful to eat’ and Fulba could not tease him for ‘not earning big’.

That Night, Mocha did not return home to Fulba’s warnings of not getting drunk again. Ranauk did not frolic that day.

He returned home to their charred bodies.

A massive fire had broken out in the slum that evening.  The fire had consumed everything his life revolved around: His wife, his daughter and the corner of slum he called his home.

A raging lunatic. He shrieked and shouted. Was the God listening?

He clung to the charred bodies of his wife and daughter and refused to break free from them.  His shrieks filled the night sky with unheard tales of pain and loss.  He would have shaken the gates of hell and heaven to bring Fulba and Raunak to life. The futility of all human endeavours assumes gigantic proportions in the face of the loss of human lives. Mocha wailed and shouted. Was the God listening?

Death had claimed her victims.  Do not forget the patient vultures awaiting their feast.

The fateful night ended.  But another endless night spread its shroud over Mocha’s life. Who was to be its victim? The mascots of death were circling in the sky.

Mocha cremated Fulba and his little daughter. The flames rising from the pyre grew intense and then fell silent. The ashes of charred dreams smeared the face of the mighty Earth.

Nowhere to go, he could now go anywhere. To hell, if he wishes.  Indeed, he chose hell.

The hell came in the form of indulgence in booze.

“I need no money for Fulbas’s saree and munni’s frock.  I need not earn big.” Mocha whispered to himself in a state of grief that smothered his zeal to live. But does mankind know any grief that can quell the hunger pangs?

Mocha’s binge drinking sessions were invariably interrupted by hunger pangs. He would run helter-skelter, bump into passers-by and beg for money to eat and would get kicked all over. Once, he tried to run away with a packet of bread and got beaten until blood started oozing out from every part of his anatomy. Lying in the pool of blood, he thought of the packet of bread his numbered breathes relied upon.

Once he had God to thank for everything.  The fire in the slum that night evaporated His presence from Mocha’s life.  Hungry, drunken and with no God to blame-He slept on the road, unperturbed and uncomplaining.

Another fateful morning dawned.  What had this morning come for?  Maybe a few scraps of food, or maybe a feast?

Mocha reluctantly opened his swollen eyes. The passer-by who had kicked his eyes open had melted into the crowd of people who were bustling with energy and surely had ‘plenty to eat’.

Mocha rubbed his eyes in disbelief. Fulba was standing across the road with ‘plenty to eat’ in her hands. Raunak was frolicking around her. A mirage?  A trap?

Mocha stood like a wounded warrior about to collapse. Dazed and frail in spirits and body; he tried to run towards Fulba and Raunak.

A pool of blood formed on the road and a ruptured skull bore the testimony to the last death of dance. A speeding sedan had hit Mocha as he ran to claim the last scraps of food he saw across the road in the hand of his beloved Fulba. People gathered around Mocha’s dead body. A few enthusiastic kind souls were recording the spectacle of Mocha’s death on their smartphones.

The mascots of death were circling in the sky.

Mocha slept on the road, unperturbed, uncomplaining. This sleep was to free him from the pangs of hunger.