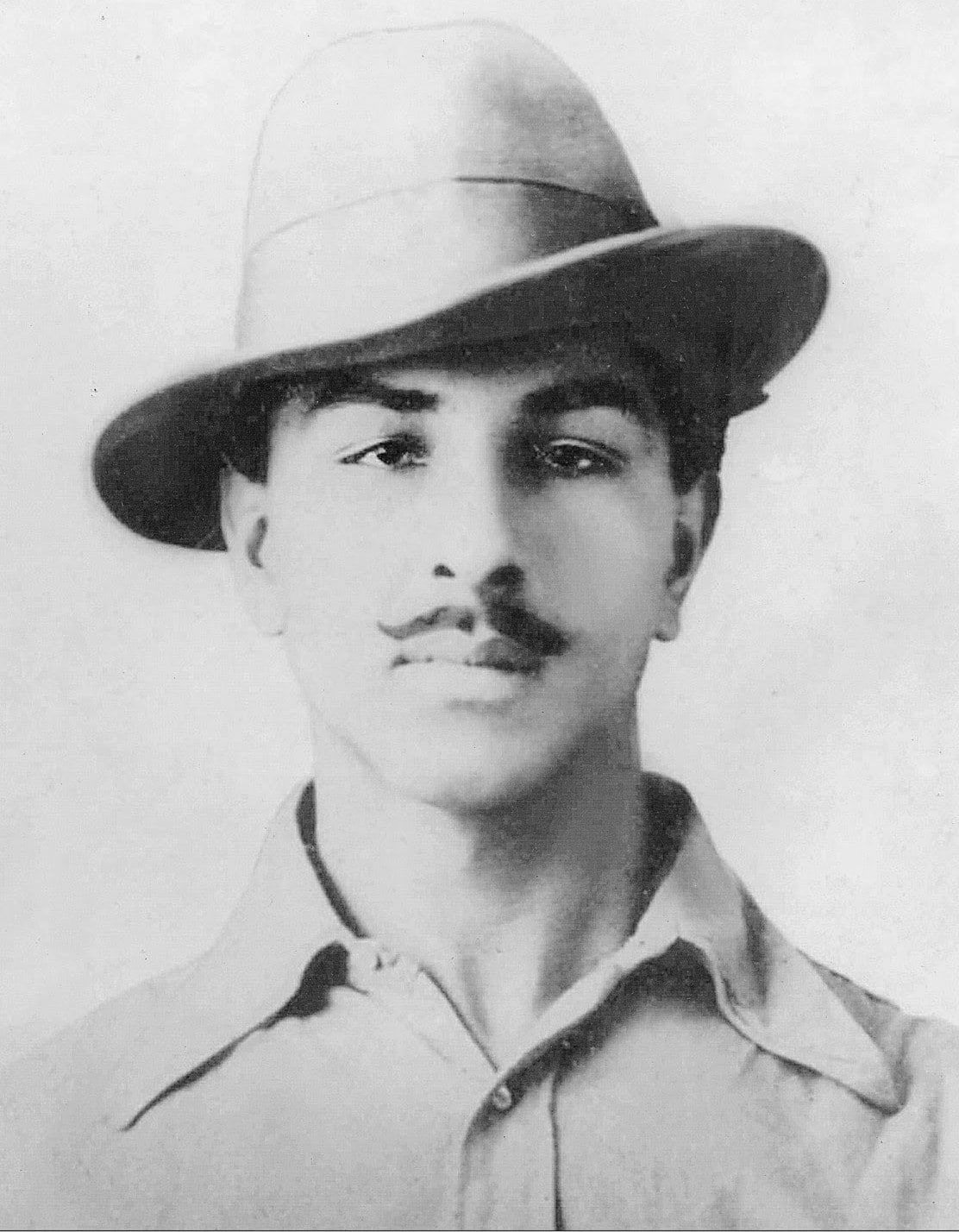 I Empathize with You Bhagat

On Bhagat Singh's essay- 'Why I am an atheist'

I empathize with you Bhagat

On Bhagat Singh’s essay- ‘Why I am an atheist’

A few days back I watched the movie “Sardar Udham”. Before that I never knew about him, or who he was, although, there is a town not much far from where I live called UdhamSingh Nagar. That was my only familiarity with the name and I was still bereft of its real significance. Sardar Udham or Udham Singh was a freedom fighter and revolutionary who was an accomplice of the famous young revolutionary Bhagat Singh.

As a young boy, I had read about Bhagat Singh in our Hindi and History textbooks, but it never instilled a sense of deep reverence in me like I had for Gandhi about whose deeds and personality I was very well-acquainted with. I just knew that he was a freedom fighter. And for Udham Singh, we never learnt anything about him in school.

So, watching the movie made me curious about these two personalities and I searched about them in Wikipedia. The movie made me empathize with these personalities and the trials and tribulations they had undergone for implementing their inherent deep desire for India’s march to freedom. It inscribed the patriotic fervor in my conscience in the same spectrum of sentiments just like films like “Raazi” did.

One day, I came across a book by Bhagat Singh while I was visiting a book shop titled- ‘Why I’m an atheist.’ I later brought the kindle version of this specific essay and read it and I was astounded by its profoundness for it came from a young man who was just twenty-two or twenty-three when he wrote it. Such depth, genuineness and eloquence were there in this essay it made me feel like a kid reading a giant.

In this essay he puts out legit questions on the existence of a supernatural being called God, who is guiding the living and gives out logical reasons as to why he doesn’t believe in any such entity. He proclaimed that he was a devout atheist.

He was not wrong to disbelieve in God. Considering the circumstances, he was witnessing a wild rampage of sorts burning the nation, turmoil and agitation filling the nerves and breath of India, people trying to protest against the exploitative and authoritative government of the British, and he trying to bring a revolution in his own ways of violent strategic attacks on the British personnel.

He was trying to bring a radical change in the minds of the people by becoming an example of a revolutionary so that people do not bow down to what British government does to them. He was not wrong to do that as a young man, because he had witnessed the Britishers mercilessly exploiting India and he wanted to do something about it.

That is why he is still celebrated as a youth icon, and I was totally unaware and indifferent to his contribution in our freedom struggle until I watched the movie, I mentioned above. I wanted to know more so I read the essay by Bhagat Singh in which he talks about his devout atheist faiths.

As I mentioned, in my view he was not wrong to disbelieve in God. His conditions, the circumstances of India at that time, his individual free-spirit and his rational logical mind could not accept the fact that there was some God “up there” who was watching all the miseries of the world and doing nothing about it. It is but natural for all of humans including me, that in the time of adversity we either start developing faith in God or come to a mental state of negating all this “God Business.”

Bhagat Singh wanted to stand on his own knees and didn’t want to rely on any external entity like God for his redemption. He considered such an act to be an act of weakness.

In his own words although he had studies communist and atheist thinkers like Marx, Lenin, Bakunin, etc. he wasn’t aware much about the depth of our own scriptures of Vedanta or Sikhism. In short, he factually had wrong idea of what God is. He was not aware of what God are we actually worshipping or praying to. He himself said, “I had a great desire to study the Oriental Philosophy but I could not get any chance or opportunity to do the same.”

He asked a few questions from the “believers”, which I will try to answer in accordance to what Swamiji has taught us:

He asked, “if, as you believe, there is an almighty, omnipresent, omniscient and omnipotent God-who created the earth or world, please let me know why did he create it? This world of woes and miseries, a veritable, eternal combination of numberless tragedies. Not a single soul being perfectly satisfied.”

To answer this, I am taking one of Swamiji’s video as reference. Swamiji says, “this question is achintaya (it doesn’t have an answer). What was the need for the creation of this universe is the question but need is derived from the thinking of man? Man doesn’t come out of his desires and needs throughout his life.”

Swamiji says, he doesn’t believe in an entity who created this universe to just witness people suffering. He said, he believes the warmth in fire is God, the cool of water is God, the feeling of compassion is God, the laugh of a child is God and so are all the other emotions. He says this question of why God created the world is an unthinkable question. It can only have theories but no solid grounds of testing. It is not a matter of sorrow-this world and its affairs, it is as our scriptures describe it, a nritya (dance), a lila that’s going on by the will of the supreme magician God.

Bhagat Singh you were not wrong to pose this question. This question comes to mind of every seeker, but the answer to it lies within and the answer is in the dissolution of this very question, when one starts playing the part of the player one is assigned to, in this game of life by the primordial intelligence which governs this universe.

God is more of a matter of personal faith and is purely subjective. Although, I am nobody to say anything on ‘What is God’ but through my own study of scriptures, hearing discourses of saints, and through my own analyzing mind, I have come to believe that God is like Gravity.

His presence, is just like gravity. Just like gravity is not a matter (solid, liquid, or gas) yet exerts a mysterious force on objects which have mass due to the bending of space-time curvature, so is the force of God. God is as alive as gravity yet he/she is certainly not an entity which is just witnessing the world suffer.

God is a personification of the energies and forces which permeate this universe and the great sages of the past personified them because these primordial energies are truly alive. For say, Goddess Sarasvati, is the personification of all the knowledge of the universe, both of which are infinite. Infinite things can be done through knowledge which although intangible in itself, makes it truly alive.

Similarly, Goddess Laxmi is all the wealth in the universe, in all its varied forms. Wealth is power and infinite things can be done through it for wealth can be spend in infinite ways. This makes it truly alive. In the same spectrum of thought, Mahakaal is personification of Time itself which is truly alive and running and so are other deities, Gods and Goddesses.

Also, to give another much more sophisticated viewpoint, I quote from the book, “Tantra Unveiled” by Pandit Rajmani Tigunait on the question of what is this thing we call God or Deity,

When the adepts discovered how to access this shakti (primordial life force) and the domain of matter and energy animated by it they were able to pinpoint the precise nature and characteristics of the forces governing our anatomy and physiology as well as all other aspects of nature. And to communicate this knowledge to those who had not had the direct experience, tantrics referred to these forces as “deities”, explaining that any deity(force) that dwells within us also dwells outside us.

Although all this must still be a very limited way of comprehending what God is but I believe, it gives a glimpse of what our scriptures truly mean when they talk of God. And Bhagat Singh was misguided about the understanding of Divinity owing to his deriving all his understandings of the same from general masses and popular beliefs and not from the depth of scriptures themselves.

However, Bhagat Singh was right when he said that, “Belief softens the hardships, even can make them pleasant. In God man can find very strong consolation and support. Without Him, the man has to depend upon himself.” And that is the whole premise of why man needs God. God doesn’t need man to worship Him but man needs God to be worshipped.

Truly, a courageous heart who can conduct himself virtuously, spread love and show concern for all fellow beings and is strong enough to stand and face the trials of life, such a man doesn’t necessarily need God.

Even though Bhagat Singh didn’t believe in God, he was still a very spiritual person for he had found his strength in himself in a place, where God truly resides, that is, within us. He could find the answers by searching within for within is where all the answers lie. He had shown concern for fellow Indians and wanted to bring a change, and through his actions he did actually bring a change in the dynamics of the freedom struggle.

I empathize with Bhagat Singh for all that he had went through and I respect him for the man he was. In his own words, “the day we find a great number of men and women with this psychology who cannot devote themselves to anything else than the service of mankind and emancipation of the suffering humanity; that day we shall inaugurate the era of liberty.”

What We Are
A Poem for Divya Ji