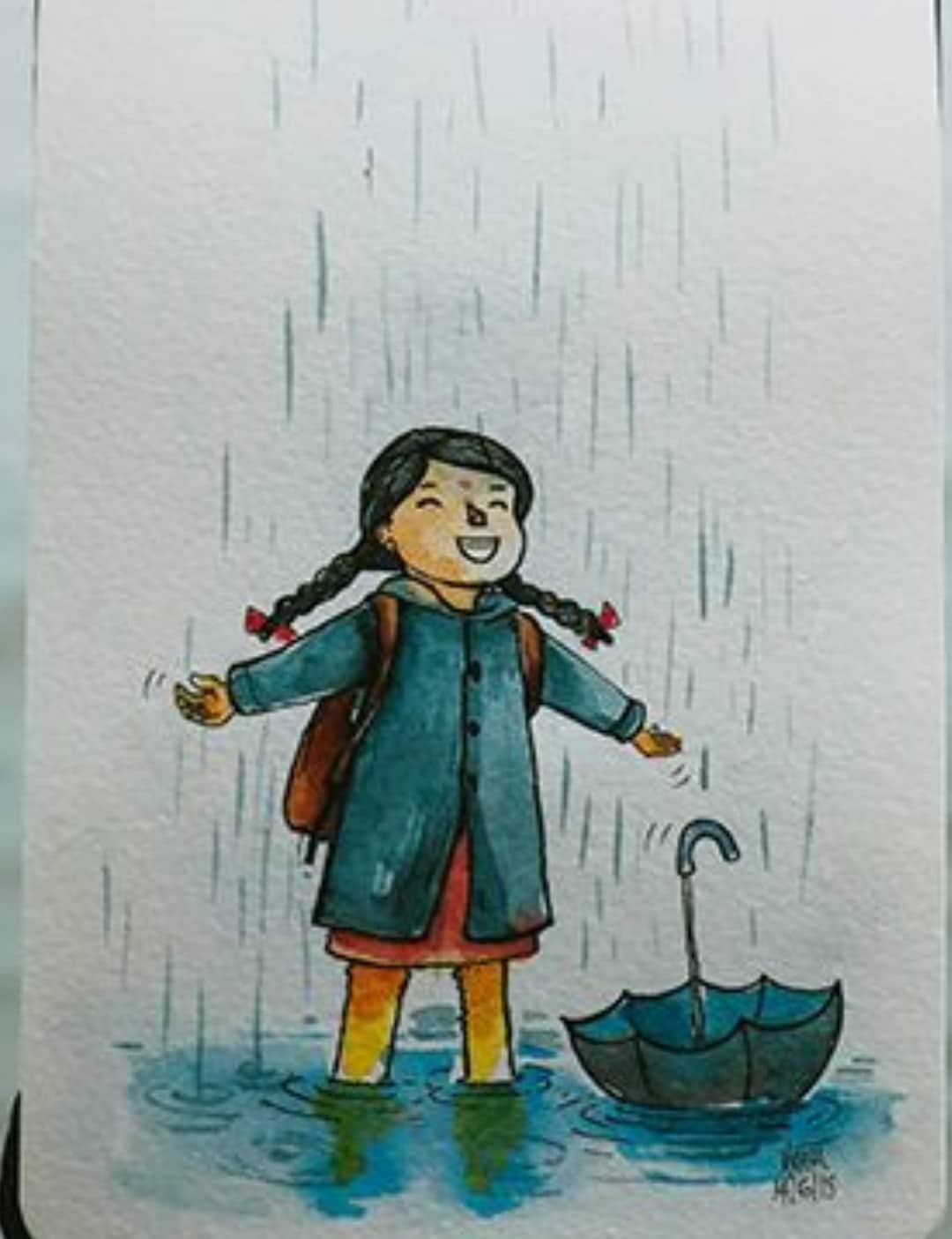 Indian Summers are always followed by a Monsoon season, called ‘ Saavan’ in Hindi. Also called the north western monsoon because the Peninsula heats up while the Sea area is at different temperatures and thus winds blow from sea to land and give relief to the hot soaring land. This time as predicted, Monsoon has arrived a little earlier.

Today, a cool breeze is murmuring and foretelling heavy showers. So I remember a similar day from my childhood.

It was the first day of the School after summer vacation got over. I was in no mood to attend the classes on the first day after so much fun filled holidays, but somehow I made it through the hot day and came back home with a tired face. After having my lunch and changing the uniform into casual home clothings, I heard a huge lightning sound. I called my mom and sister, who in turn told me to come out of the room into the vedha( open ground in front of Indian houses) and as we lived on rent on the first floor, the landscape was beautiful. Luckily, wherever we ever shifted, we got a house with a park in front of it.

The dark heavy clouds were arriving with thundering sounds. On one side the sky was washed with pink and golden strokes and on the other side these joyous clouds were waiting to pour their love and laughter upon us. Within a few minutes, all the shopkeepers started taking their articles inside, and children came up on the terraces. Our landlords who lived on the ground floor came up to enjoy the beauty and cool relief after a scorching day. Everyone’s eyes were up upon the sky now completely covered with shades of grey. Any minute now, just any minute we all will be wet in the divine droplets. 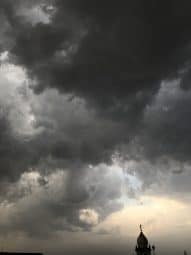 Next minute, we could see droplets scattering on the ground. The elders were analyzing the rain drops, whether they are big or small, whether the rain will be a short one or a longer one. While the children’s eyes were sparkling up and thinking of all sorts of games that we could play in the rain and also expecting some more holidays from school if the rain continued. The droplets got heavier and faster and slowly it started to pitter patter.

All the adults went under the shelter with a hidden desire to enjoy the cool drizzle a little more but their adulthood didn’t allow them. However,  we children were jumping and shouting at the top of our voices. Birds went into their nests and there was no more chirping that could be heard. All of us were dancing and also playing the frog game on the surface where rain water was collected. Some of us made boats, some opened our hair and let them dance with us. Girls started doing Kikli dance( it is a famous folk dance in which two people hold their hands in a criss cross position and rotate as fast as possible, it was traditionally performed by unmarried punjabi girls in the month of Saavan known as ‘saun da mahina’ in punjabi).

After some time, a hailstorm started falling on the ground and we couldn’t get happier than this. We collected hailstorms and showed them to our parents. All children out of excitement would sing a Punjabi poem,

So our homes remain filled with grains,

Pour the rain faster and faster”.

Apart from these traditional Monsoon songs, there are many Bollywood melodies on Monsoon, one of my favourite being,” Aaoge jab tum oh Sajna, angana Phool khilenge, barsega Saavan, barsega Saavan jhoom jhoom ke, do dil aise milenge.” Other ones like oh sajna barkha Baahar aayi, aaya Saavan jhoom ke, Saavan beeto jaaye pheharwa, barso re megha megha, etc. You can add your Monsoon favourites in the comments, I would love to listen to them.

Coming back to my story , the smell of Pakoras cooked by our mothers was now dispersed in the whole house. After two hours of continuous bathing in the rain, the breeze was freezing and a slow drizzle was still pouring down. We all changed our clothes, dried out hair and cherished hot tea with Pakoras with prayers for continuous rain so that schools remain closed for some more days.

Indian Monsoon is not just rain pouring down but has so many other feelings and traditions attached to it. Today the changing strokes of the clouds and cool breeze surfaced so many emotions and memories in me. Indian monsoon is also associated with longing for the beloved as in the lyrics of most of the above-mentioned songs, and also symbolises joy of the farmers whose lands are waiting for raindrops after being thirsty in hot long Indian summers.

So this time I thought that whenever the rain would come I would be enjoying it to the fullest. Would love to know experiences of Indian Monsoon that you all had or are planning to have soon.


Login with Email
No Account? Create One
Who is Smarter? You or Your Phone.
Antebellum – 12