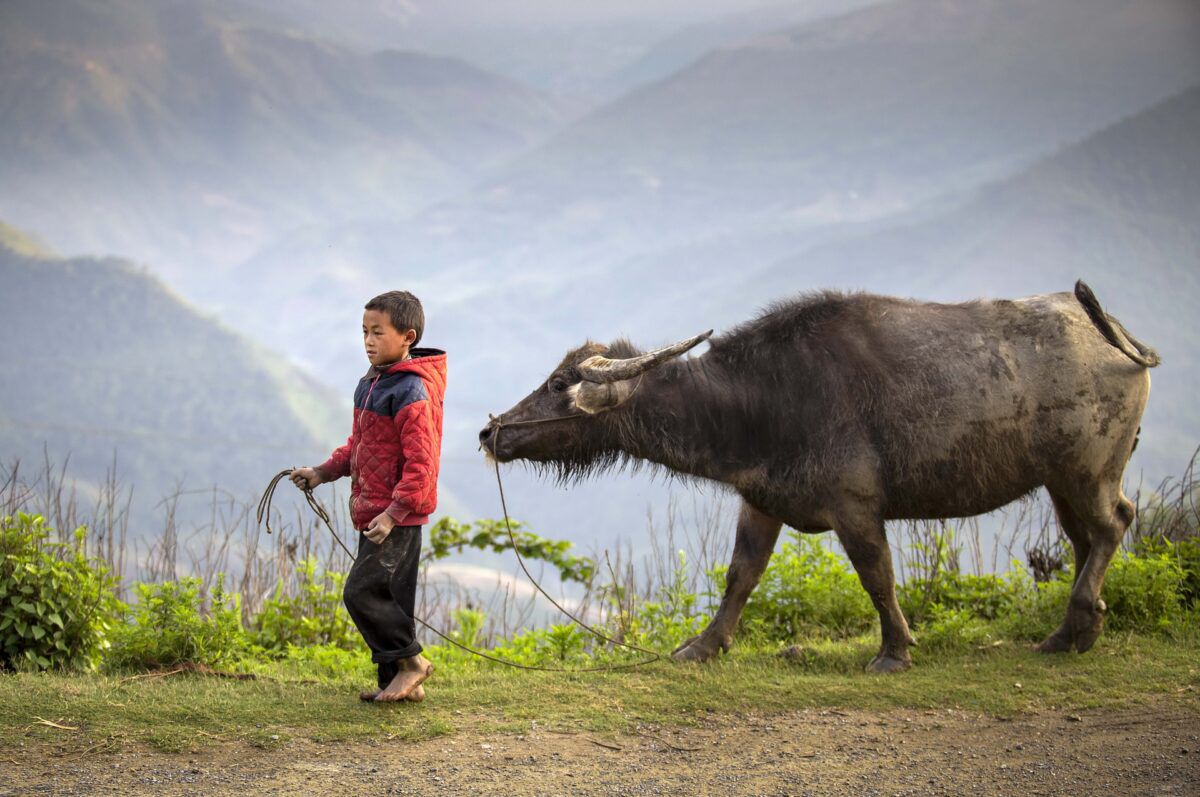 One day, disciples sat around their Zen master. One of them said, “Oh, Master! Please tell us a story today!”

The master said, “Okay, but I will ask you a question at the end of the story.”

In their eagerness to listen to the story, they all said, “Sure! We are ready.”

The master began telling the story. “There was one very fat buffalo in a village. Every day it walked past a hut on its way to the fields where it grazed. On the roof of the hut, people had placed many straw bundles to help keep the inside of the hut cool.

One day as it was on its way to the fields, the buffalo’s eyes sparked in astonishment. The window of the hut was open! The buffalo excitedly went to the window and carefully put its head inside, expertly moving its head so that its horns do not get in the way. Just as it had expected, there were many bundles of straw stacked in one corner of the hut.

No matter how much it stretched its neck, it could not reach the straw. So, now it tried to squeeze its body in through the same window. His horns, face and all of his neck was inside, but the straw was still out of reach.

Slowly it brought its front legs inside the hut. It pressed its legs on the wall and pulled its body in. Little by little, its huge body broke through the window bars and, now the biggest parts of its body – the hump and stomach – were inside. All that was left were the hind legs. It slowly brought in one leg at a time, steadying itself.

Grunting loudly with its accomplishment, it believed it had fully entered the hut. It stretched its neck to reach the straw, but it could not, because its tail was still stuck!”

The master stopped his story here.

He asked, “Is this story possible or not?”

The disciples said, “This is not at all possible.”

“The smallest part of a buffalo is its tail. If it could put its head and stomach inside, why couldn’t it bring its tail in?”

The master said, “There are many buffaloes amongst you.”

There is a wonderful story about Bahubali. Bahubali had seen many wars. At one stage, he had to fight a war against his own brother. Many warriors’ heads rolled in that war and the battlefield was full of dead bodies and rivers of blood.

When he saw all this, he was shocked. A transformation happened within him. A question arose within him, “Why did I take away so many lives?” but he could not find an answer. The next moment he renounced the war and everything he was doing. With complete attention, without moving an inch, Bahubali stood in one place for fourteen years in deep meditation. Through the intensity of that sadhana, many things that he was attached to broke down within him.

That man who wanted to conquer the entire world stood there in great humility, ready to bow down even to a donkey. But he did not get enlightened. In all those fourteen years, he did not utter a word to anybody, nor did he change his stance for any reason. He could not understand why he had not gotten enlightened. Then a yogi came walking in his direction. The yogi turned to look at Bahubali. Bahubali longed to ask him, “What more should I do?” But having stood in silence for fourteen years, he did not have the heart to open his mouth and ask. Instead a teardrop rolled down from his left eye as the question:

“I have lost my kingdom. I renounced my family, palace and comforts. I have melted to the point of even bowing down to an insect. What more is there for me to do?”

The yogi said, “You have turned into a wonderful human being. You can bow down to a worm or an insect, but are you willing to bow down to your brother like this? No. That is what is holding you back.”

Bahubali realized his state. He dissolved what was binding him because of his hatred to his brother. He attained at that very moment.

Even if you take them to heaven, their little finger will still be tightly wrapped around something. It could be something as simple as a cellphone or a bed sheet they use. Or they will think of a certain place as their own and only sit and meditate in that spot.

Even if the entire body passes through, this is how just the tail gets stuck. If the tail is cut off at the right time, they will get enlightened.

So what is it that you are holding on to?