Now we will see what is the universe/ World/ Jagat??

World is the conglomeration of the things and beings. Things are all nonliving / inert matter/जड( stones, rocks, rivers, well, houses, etc)  and  beings are all living species.

#Five great elements/पंचमहाभूत_ Entire gross inert world and gross bodies of entire living beings are made up of these five great elements- Earth, Water,Fire, Air, space. This is the total gross world(स्थूल जगत/विश्व)

You must have noticed that these 24 factors are also in individual jiva. ( Gross body of five great elements,  Subtle body of Subtle aspects of same five elements I.e. 5 Jnanendriyas, 5 karmendriyas, mind, intellect, memory, ahankar) Got it?? 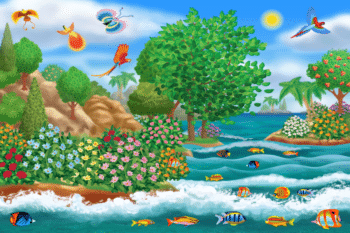 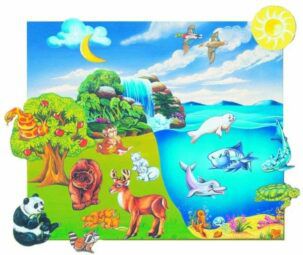 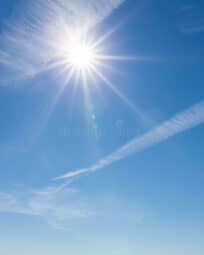 You  already know that the causal /seed body,  is the cause of the gross and subtle body and substratum upon which play of these bodies is going on is the Atman/The Self.

Thus We can express the individual jiva in mathematical form as-

Few points to be noted here that,

☆Brahman at the individual level is the Atman.

☆ The individual Gross body is made from Total Gross elements.

☆The individual subtle body is made from total subtle elements.

Remember that the cause of  gross and  subtle bodies is the causal body, which is the layer of the Ignorance.

Macrocosm = Brahman+ Maya+ Total subtle world+ Total Gross world.
Now be attentive~  The microcosm is the individual jiva. And, The Macrocosm is the Lord/ God/Ishvara. Are you surprised?
( Brahman associated with Maya or conditioned by gross, subtle and causal world is the saguna Brahman/ God/ Ishvara)

Remember the image of God, you have built in your mind from the innumerable God stories from the books and your elders…the विराट रूप  of the Lord, Arjuna was watching in kurukshtra. One with so many hands,feet, legs, heads, etc. Every event has been occurring inside the virat Roop of Lord. 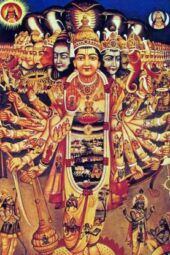 If you think this aspect at deapth, you will understand what does it mean. Remember the quotes- ‘ God is everywhere ‘, ‘ कण कण मे भगवान’, ” God comes to help us through the people ‘ etc.

Implicite meaning of these sayings is that God helps you through people in our surrounding only. He has infinite hands to help and legs to run for help because He is constituted with all these beings only. His mind is the collective minds of all the beings, that’s why he knows our wishes of the mind even if we don’t express verbally. Everything and everything is interconnected.  Got it?
Thus who is the Lord?? The Truth ( Brahman) endowed with Maya ( & it’s effects total gross and subtleworld)

You have already learnt the power of Maya. It is the creative power of the Ishvara. Here you need to know the difference between Ishvar and Brahman.

Brahman is the Truth, in which there is no trace of Maya. Brahman is the Sat Chit Ananda. It needs no power as it is omnipotent.  It doesn’t create anything, It is the only Existent Non dual principle.

It is the Ishvar who creates the world with the power of Maya. Ishvar is the Brahman only when associated with the maya. It can be explained with the example of the sea.

‘N’ number of water drops make an ocean. That one water drop is like Individual jiva. Ocean is like Ishvar. And water is like the  Brahman.
That means jiva and Ishvara has one and the same substratum- Sat Chit Ananda Brahman.  What differs is the outer conditionings.  Individual jiva has limitation of three individual bodies, and Ishvara has limitations of total three world’s ( causal, subtle,  gross)

Maya, the creative power of the Ishvara is worshipped as shakti/ power.  Maya has created this boundryless cosmos from beginning less time and shall continue to do so endlessly.

By the permutations and combinations of these three gunas/ qualities,  an infinite variety of names, forms and properties are created. we will see how the Ishvara Creates the world with his maya/ power/ shakti in next part.
Hari Om !

Self-Destruction
THE STORY OF A BEGGAR