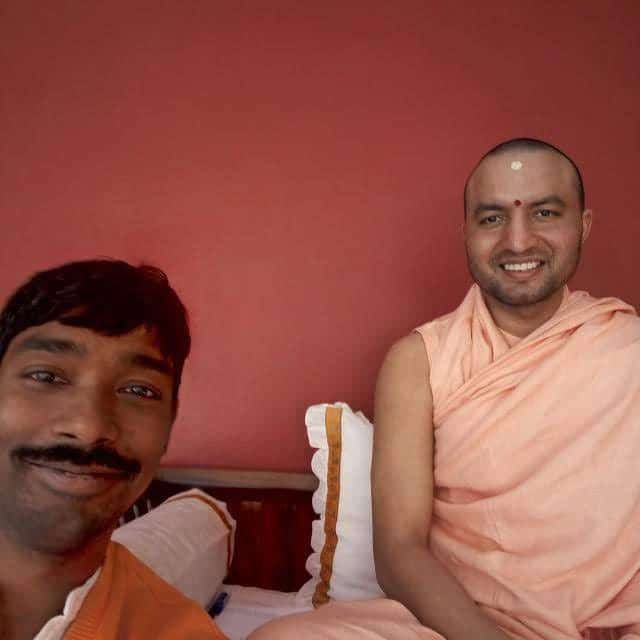 Journey from Srinath to Srinath Om

Guru Grace In our Life

I had been failing almost all aspects exactly ten years before, in 2012. I lost all my saved money in business, lost my IT job, lost relationships with my parents, and lost my good health-been on bed rest for many months.

I know God can test us but never punish us.. even after lots of losses, I still had hope in God. He would definitely show me some way to start my new life.

To do my job, I should be healthy. What I have decided to do is to improve my health and my confidence level by obtaining knowledge. Keeping that in mind, I’ve enrolled in ISHA yoga classes during the rainy season, which are located far from my home.

I got into an accident because of heavy rain, broken roads, and drainage holes. Despite my broken legs, woonds, and pains, I attended classes and learned all the asanas.I have realised this is a test for me to decide whether I will continue yoga or not. I have continued and I have passed. However, the experience was very amazing. For the first time, I felt happiness and contentment without any reason in my life. There is some hope that Ray started in my life.  I used to practise yoga daily for 4 to 6 hours a day for months after coming from classes, since I didn’t have a job or any work to do. Slowly, the transformation has started in my life.I got an IT job in 2013, gradually started leading a happy life, but I have decided to become a yoga teacher and own a home. I have achieved both in a year’s span.

I have joined BODHI Yoga and got my RY200 Certified Yoga Trainer,in 2016. Here I have started breaking my ego. Slowly, I have gotten onto a spiritual path. I have joined IWC Pranic Healing. Here I have started opening my heart chakra and want to serve/help others. I began practising meditation hours together, my heart weighted, my wife smelled sandle wood from me, and I noticed the Sahasra chakra opening. I have started learning about all types of yoga systems and therapies. – formalised paraphrase Here I have become a master and trainer in accupressure, marma, meru chikitsa, auricular, varmam, dorn, colour therapy, etc.

I have undergone all the spiritual courses till the advanced level in the Art of Living, ISHA, Goraknath, Vedadri, etc. Slowly, three years have passed, and my craving for a spiritual Guru has reached its peak. With sleepless nights, I began to cry, and my cravings for guru became insane. Finally, my guru showed his grace and showed me the way via my spiritual buddies.

For the first time, when we travelled from Hyderabad to Himachal Pradesh, “thoughts were bombarded in our minds-as we didn’t know whether the Swami ji was real or fake, whether he existed, or whether he gave us darshan”. We only had one decision to make, whatever it was: we had to go to the ashram and have darshan.

We had a stop in Delhi, and we (my wife and my two children, Preetam, 10 years old and 5 years old) slept on the platform for hours, but we were still reluctant to miss Swami Ji’s darshan. Finally, we reached Himachal Pradesh in the night at around 9 p.m.,

The driver said it was very dark and risky to go to the ashram. The driver had offered shelter for us in his relative’s house. It was almost like a film. The journey to his home in the hill region was very scary and fearful. We were not connected to Swami Ji, and we were not sure we could pray to him for our safety. But, when we reached the home, we relaxed, and they were celebrating the driver’s niece’s birthday. Suddenly, I felt like I was in Tirupathi (i.e., in God’s hands).

The next morning, we went to the ashram for the first time. We were about to see and meet OmSwami Ji. The way Swami Ji was walking inwards to our Ashram Temple, somehow my heart became heavy, there were tears in my eyes, and I felt I had fallen in love with him after his quick glance at me.

My father used to worry about me, “You are dumb, you lose everything, you don’t know how to save money, you don’t have memory power, you are a failure.” I was used to feeling I was in no way useful to living this life and didn’t have eligibility to utter God’s name. But, after his meeting, there is a lot of hope, a safe, secure feeling, and some kind of worth living. For the first time in my life, I felt so lucky and some of it was worth living for. All my problems have not disappeared; they are continuing. However, I felt safe and happy because of my beloved guru’s blessings and karuna.

In 2019, in March. My beloved guru gave me my first initation. You know, on that day, Ragu swami offered his sweter while I was shivering in que to meet our Guru. I got selfy with Swami fortunately, Swami Ji has signed on my book. Ooh God, what should I tell, I was on 9th cloud, thrilled with amzing experiences in Ashram. Now, I have started my second innings as Srinath Om.

My wife and elder son were initiated in February 2022, and our entire family became an Om (OmSwami) family. When my turn came for second level initiation, I entered Swami’s room, not like the first time, and this time, I was a bit cooler and went up close to our guru. Swami Ji thought, “It was my first initiation and I did the process.” And, I have conveyed to our Guru, Swami Ji, that last year was the same; is there no change? “Swami Ji said, “Let me correct it” and did the second initiation. While he was blessing me, a small thought entered my mind. “I reasoned. “Swami Ji doesn’t know me, that I have already gotten initiation.” At the very least, he touched me and blessed me; this is enough for me. ” After the process, Swami Ji said, “Your devotion is good; you are doing the right job and I felt happy. I didn’t want to waste our Swami ji’s precious time. So I got up and left hurriedly. While leaving, he said, “Your parenting is good; you are taking care of your family in the right approach.” There are no boundaries to my happiness. I expressed my happiness and joy to our guru, by saying “Swami Ji, you know about my family. That in itself is a great gift for me. Thank you, Swami Ji. I’m very happy now “and left the room joyfully.”

my guru appreciated my parenting and my devotion.Now, my entire family under his hood/shadow,  What else do I want for this life? . I’m ready to leave this body any time, and I don’t have any dreams, goals, or desires. Except for removing the weed of debt and planting the seed of spiritual prosperity by doing Sadhanas and praying Divine mother glories.

If you would like to know my Sadhana Journey, Sri Suktam -960 days

My identity is that I belong to my guru and my maa Om Swami. My refuge is Him. ❤️🙏