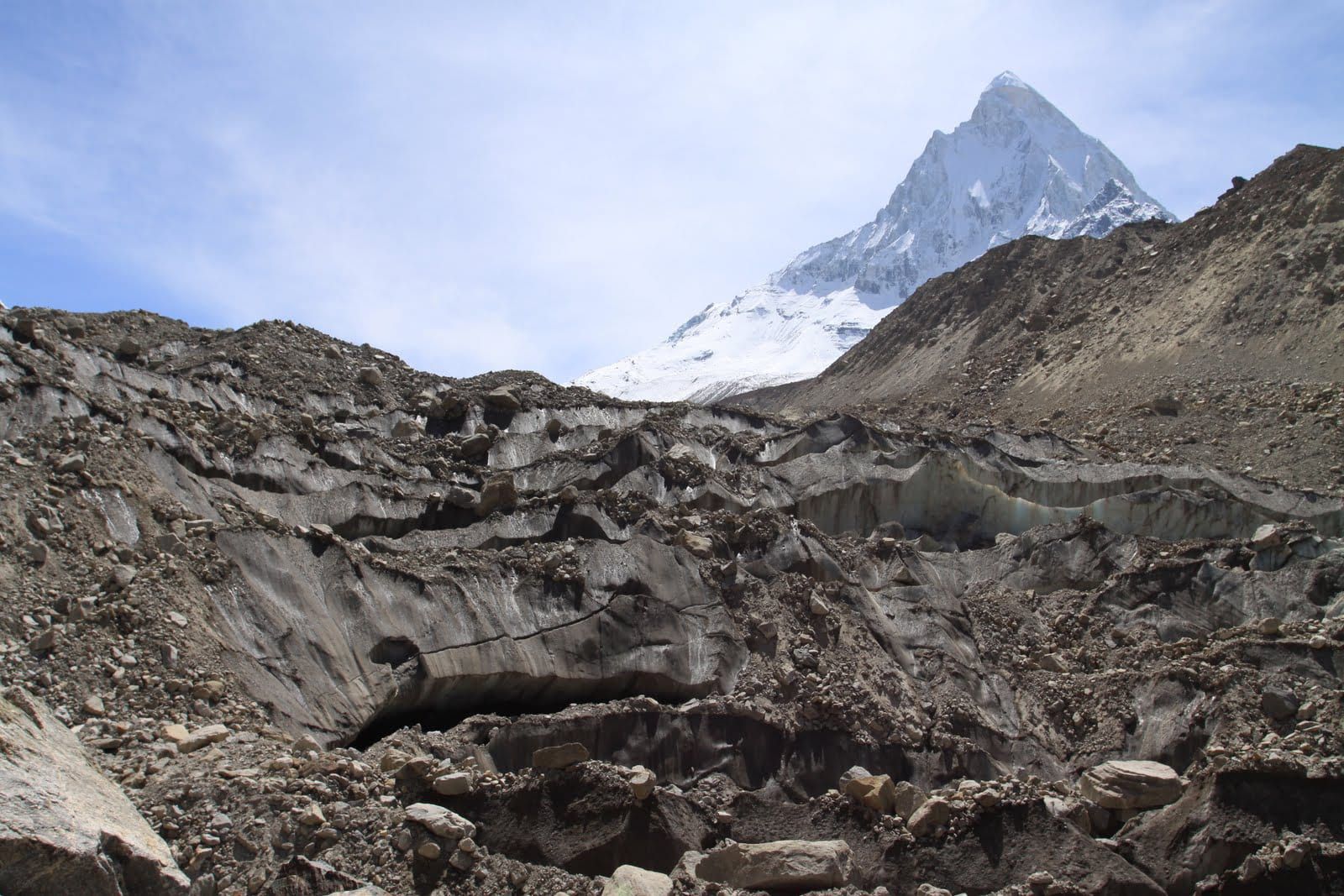 Journey to Gomukh – The Origin of River Ganga

Experience of Trekking to Source of Ganga and Beyond

The year was 2008. Three families, including ours, decided to go to Gomukh, the source of river Ganga. My friend, Shailesh, planned everything and as instructed by him, all of us trained for the grueling trek for a month, climbing stairs every day. To date, it is still the best trek that I have experienced.  I am writing this post for two reasons – (a) to share with you the beauty of this place, and (b) to motivate you to take this journey.

All pictures are ones taken during this journey from Haridwar to Gangotri, Gangotri to Bhojbasa, Bhojbasa to Gomukh and Bhojbasa to Tapovan. Shailesh is credited for providing these photographs.

On first day, we traveled by road from Haridwar to Gangotri. On the way, we were overwhelmed by the beauty of valley where Tehri dam was under construction. We also learnt that neither Onions nor Garlic are cooked at any of the restaurants in this region.

We reached Gangotri, and after taking shower and a little rest, attended evening prayers at temple and stayed in Government Guest House. We noticed that Yogis were cooking their dinner at restaurants by themselves (restaurants provided their facilities), perhaps because of lack of facilities at their places of stay. We also observed a Yogi covered with ash with just a lion cloth in mediation. We saw him sitting at the same posture the next morning. As you can appreciate, nights at the elevation of Gangotri in month of September are quite cold and the Yogi meditating in open was an amazing site. It was my first experience with something that I had read in Living with the Himalayan Masters.

We began the 16 kilometers trek from Gangotri to Bhojbasa on second day. Our plan was to cover the entire distance in one day; however, with 7-10 kilograms of weight on our shoulders, we had to halt and spend night in valley, next to Ganga with no humans in site.

We stayed in tent that we carried and ate packaged food. It was damp and cold and we had first taste of what it feels to stay under open skies with only thin tent on top and a sleeping bag.

On Day 3, we again started early from middle of no where to Bhojbasa. It was quite a climb from valley to the trek. It was also distinctly noticeable that any foreign national returning from Bhojbasa will greet us with “Namaste” with text-book gesture of two hands meeting. We also enjoyed innumerable water channels trickling down from the mountains and merging in Ganga – always flowing along the trek.

We reached Bhojbasa by later afternoon and after resting for a while, we trekked to our destination – Gomukh which was about 4 kilometers of distance.

We were in tents managed by the Government at Bhojbasa and on first night, mice were jumping around on our cotton blankets as we got ready to sleep. We immediately went to the Manager and he smiled and said, nothing will happen. They will not harm you and will go away. This is exactly what transpired. My friend, his spouse and our son decided to go to Tapovan the next day. This required crossing the Glacier and negotiating steep climb which rest of us thought is not our cup of tea.

Out of the blue, I decided to go to Tapovan the next morning to surprise the three of them who had spent night at Tapovan in a tent. While crossing the glacier to reach Tapovan, I stopped to catch my breath and the guide immediately told me not to stop here as anything can happen due to melting and sliding of ice. After crossing the glacier, I found it extremely difficult to negotiate a 45-50 degrees incline. I was taking five steps and running out of breath. So much so that I told the guide that I would like to return as I cannot climb. Call it Divine intervention, few boys were returning from Tapovan and overheard my conversation with the guide. One of the boys told me – “Uncle do not look up, just keep climbing.” I followed his advice and made it to Tapovan and yes, surprised my son. Those words of the boy have stayed with me forever.

And, thrilled I was after reaching and spending couple of hours at Tapovan…difficult to describe in words and, therefore, posting the photographs.

Next day, we began return trip from Bhojbasa to Gangotri. With acclimatization and renewed energy, we all covered the distance in a day, thanks to less weight on shoulders as all food was consumed. Few memories that remain etched in my memory:

Since I read the book Living with the Himalayan Masters, I was intrigued by the description in the book about Yogis residing in the Himalayas. This was the primary reason why I wanted to visit these places.

I was not able to see such Yogis in this sojourn. I did come back with a unique distinction though. I did maximum trekking of all people during these six days – 58 kilometers, and I was the oldest. My additional solo trips to Gomukh from Bhojbasa made the difference.

I wish to repeat this trek sometime in the near future.

P.S.: There are many more photographs of landscape but not able to share here for obvious reasons.

Gain and Loss on the Spiritual Path
Distance