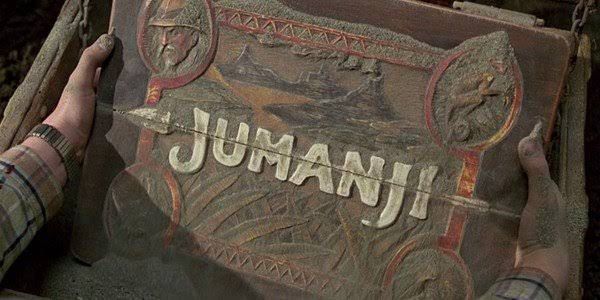 Jumanji is a 1995 movie featuring Robin williams and other actors which is directed by Joe Johnston. In this series there are 2 other movies also released but I am talking here about only first installment in the series.

The film is about a game in which things happen in real life. The game is mysterious. Once you start it you cannot end it in the middle. What the words appear on the screen of game you have to live it in real life. It consists of two dice and four players. The two players that is a boy and a girl start the game. The boy went to the Jungle for 26 years. He comes back only when one of the player took five on total of the two dice. When boy came back after 26 years all things are changed. There is no father and mother nor his father’s factory running. The players due to which he came back (i.e  the brother and the sister ) ask him to play it again and continue and complete the game but he says he will not play the witch game.

Both brother and sister ask him he cannot end it in the middle and also for things to come back normal he has to continue and end it.

Then he complete the game with several obstacles, difficulties and end it finally. Time become what it was in previous 26 years back, he met his father and mother and the film is over.

From this I conclude that the game is this “World”. Once you come that is after your birth, you have started playing this game and you cannot end it in the middle.  We come from the “Dham” of the Lord. The 26 years is life span of US. The two dice are “happiness” and “sorrow”.  We must continue the game and can’t left it in middle i.e.  continue your “Sadhna” etc. When your correct number came i.e. “Naam jap” or Sadhna met with “Bhaavana” you will came out and get out of this world and met the god (that is our eternal father and mother)