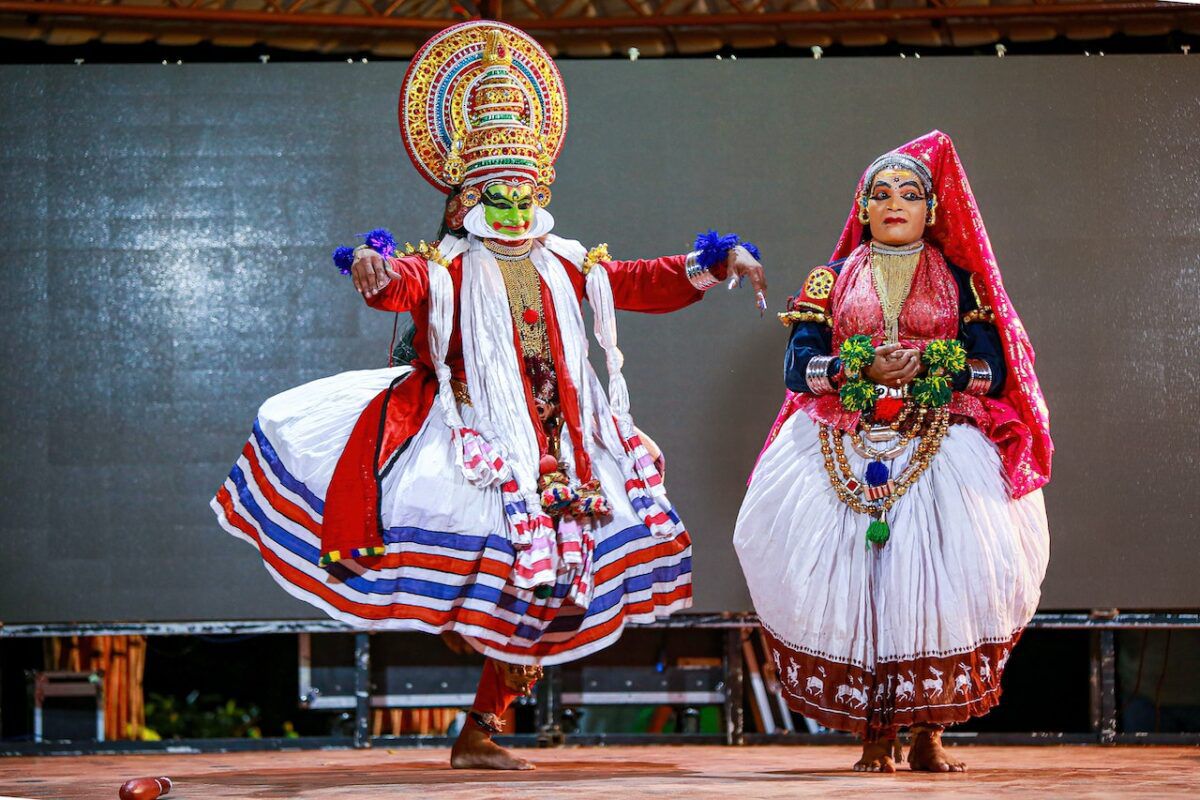 The pitch-dark monsoon nights of Peringara are romantic and hold the deepest of secrets in their bellies.

Granny brought a lighted brass lamp filled with kerosene and kept it on the veranda.

Appu cuddled up cozily in the lap of Grand Pa, her favorite place in the world. It is dinner time. Granny brought a bowl of steaming kanji and boiled tapioca on a small plate. Our dinner is light, always a rice gruel and vegetable curry. Even though terribly hungry Appu never ate her dinner without giving enough trouble to her grandparents. She started bawling and resisting as soon as Grandpa lifted the yellow jackfruit leaf spoon of kanji to her mouth. Now is the time for dramas and stories.

The incessant rains were slowly flooding the river.  Land and water slowly merged making a hallucinating vision. Small aquatic animals swam freely all around the water-filled front yard and came almost up to the cobblestone steps leading to our home.  A water snake swam past coiled on a floating colocasia leaf. The sweet smell of kerosene smoke filled the air.

Once upon a time!

There was an old scholarly Brahmin who was very fond of Kathakali. To enjoy Kakathakali ,he set off at night to far-off temples along with his aid Kurup and returned home during the wee hours when the entire village was fast asleep. Kurup wielded a torch made with dry coconut leaves ‘’choottu katta’’. Their only available light. It was past midnight. They had to walk a long distance to reach the Illam  ( home).  The Brahmin kept on walking chewing paan and regaled himself and his only listener by singing melodious Kathakali Padams . Eerie shadows moved in the moonlight in the plantain grooves on either side of the road.

The old man was shaken up hearing a melodious female voice from the dark. He looked back. Kurup was not to be seen. There was a beautiful female standing behind him, extending her slender arm for the paan. The scholarly Brahmin at once sensed danger. He knew a Yakshini of the night is following him. She already devoured his aid Kurup. Now he is the next target. If he extended his hospitality by offering’ paan’, nothing will be left of him except his nails and hair! He prayed to his Kuldevi and chanted a mantra. With the power of his mantra, Yakshini became his slave. He nailed a small iron piece on her head and made her his servant.

The next morning, old Brahmini was surprised to see a young girl coming along with the Brahmin. He told her, the girl will help her with household work.

Appu stopped crying and was gulping down the kanji now. The wick of the kerosene lamp flitted in the soft wind.

The young servant girl at the Brahmin’s Illam did all the chores silently.  She washed all the dirty clothes, brought firewood to the kitchen, Cut vegetables, de-husked rice, and filled granaries. Soon the old woman started treating the maid in disguise like her own daughter.

One day, the old man was away on one of his nocturnal adventures,  The Brahmini sat the young girl near her and started combing her hair. She found a wound and something stuck on her scalp. Feeling pity she removed the magical iron piece that was nailed to the girl’s scalp.  The Yakshini was waiting for this moment all these days. She became free once again, took her real form and swiftly ran towards the temple pond, and disappeared.

The poor old Brahmini couldn’t understand anything. She shuddered in fear and told the day’s happening when the Brahmin returned home.

He couldn’t believe the utter foolishness of the old lady.

Appu yawned. Grandpa slowly lifted her on his shoulder and patted her to sleep on the small coir charpoy in the room.  The little girl woke up in the middle of the night after a terrible nightmare. She saw the temple pond glistening in the moonlight. She wanted to cry aloud. No voice was coming from her throat. A beam of light rose from the pond and flew with lightning speed toward her home. It pierced the open window and walls of her room. Now she is totally exposed to the strange beaming light! A blood-chilling cry rose from her throat.

Lights were getting switched on. Grandpa came and huddled her. Slowly she went back to sleep.

Appu is now in her fifties. Her children have grown up. But she is still afraid of nights. She still wakes up at midnight in sweats with that scary nightmare.

Moral of the story!

Please don’t tell spooky stories to small children. It is going to harm their sleep forever!

Cover: Thanks to Jitin Murali ,at Pexels.com