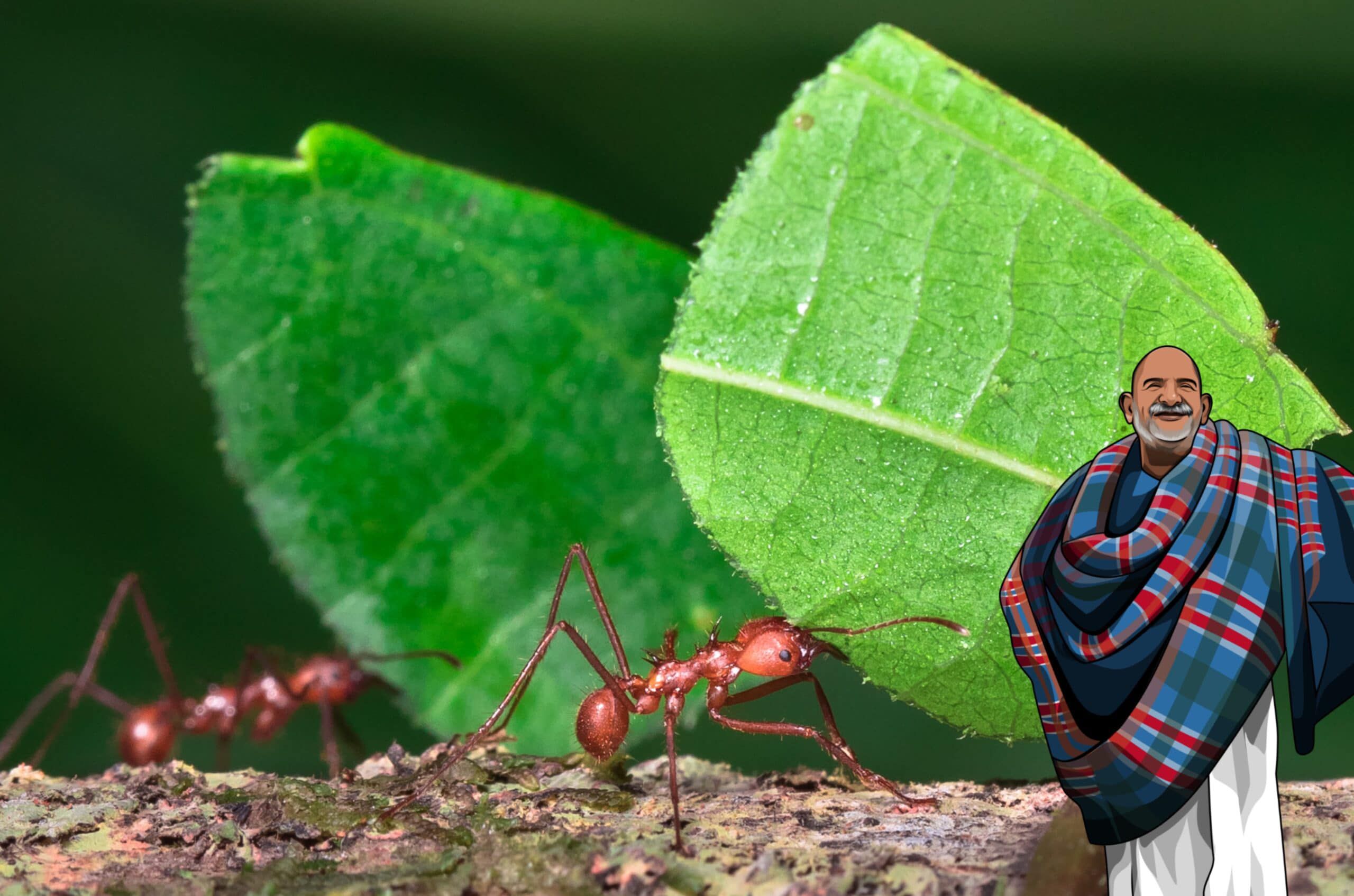 Not too long after I moved to Cahuita, a small town on the Caribbean side of Costa Rica, I was strolling through the yard. Suddenly, I stopped in mid-step as my attention was drawn to a line of leaf-cutter ants snaking their way across my garden.

More than a year before, on my first scouting trip to Costa Rica, I went on a jungle tour in a small rowboat with an eighty-year-old Tico. He introduced me for the first time to some tiny bananas that were sweeter than strawberries and the same species of leaf-cutters who were harvesting a tree on my property.

While on that expedition, I spent more than thirty minutes observing those ants cross a river on a fallen tree branch in peace and people silence. It was a fantastic experience since we don’t have them in Texas/Louisiana. As far as I know, there are only two creatures on this planet that farm- humans and ants. They don’t eat the leaves they cut, they use them to grow fungus at their nest and harvest it for nourishment. According to scientists, they’ve been doing it for fifty million years.

So there I was in my yard, about to step in the middle of their procession, when I got Divinely halted. I set my foot down and remembered how I had admired those ants before. At that moment, God said to me, “You’re so violent.” Although I disagreed with what She said at the time, She was right.

That incident started an internal dialogue between the Universe and myself that would eventually lead me to a principal called ‘ahimsa.’ In India, it’s often translated as ‘non-violence,’ but its’ Sanskrit meaning is ’cause no injury to any living being.’

I recently read the following story in the book ‘Om Swami: As We Know Him‘ by His devotee, Swami Vidyananda Om – “Once we were walking together, I accidentally stepped on a small anthill, scattering its tiny inhabitants and squashing them beneath my feet. Gurudev (Om Swami) was quick to observe my error: ‘Oh Swamiji, what did you do! These small insects build their home on the ground. Please look where you are stepping. Many minute living organisms move about on the ground. We should try to never cause them any harm or pain.’ He surveyed the mess I had made on the ground with a pained expression on His face. He seemed quite disheartened. The atmosphere changed, and a sort of gloom descended on my mind. I asked for His forgiveness. He reassured me, but I knew I had made a mistake. I then recalled how Gurudev always walked very carefully; He always looked down so as not to step on any small creature. The true paragon of virtue that He is – a guru of deeds as much as words – He never tells others to do that which He doesn’t do Himself.”

Since that day in my garden, I’ve done all I can to avoid injuring people and insects. It turns out it’s a beautiful walking meditation to care for everything I’m stepping on and over. I’m not nearly at Om Swami’s level of concern, but at least I have His example to follow.

I might be wallowing in my own bullshit. I might not have the positive intentions needed to pray. My heart might feel heavy or lonely, and I cannot bless anyone or anything. Even so, I can ahimsa – render no harm. I must maintain a sufficient level being present as to cause no injury. Isn’t this the least I can do?

Still, for most of us, “do no harm” is most challenging when it comes to our relationships. Frankly, we do more damage and more often to the ones we claim to love the most. In an instant, we can say something negative impulsively that will stick with the other person for months or years!

How long do we chew mentally on hurtful words said by someone we trust or trusted? Sticks and stones hurt the body, but words scar the spirit.

All insects aside – what if you personally decided not to harm any person in your life ever again? What if violence in words and thoughts was off the table for you, forever?

If two people are playing ping-pong and one slams the ball across the table, the other player has a choice. Lunge and maybe make the shot or merely watch it pass by. Quarrels work the same way. You can slam the ball back tit-for-tat and try to do damage. However, what would happen if you sat your paddle down and walked away? It’s a soft answer that turns away wrath.

To become ahimsa, we must practice it – we’ve got to start somewhere. The more you give up your right to be violent, the more violence will be non-existent in your life.

There’s likely someone in your life with whom disagreements become disasters. Even if you believe you’re on the ‘correct”‘ side of the discussion, quarrels cause damage to both sides – emotionally, spiritually, karmically. Truthfully, quarreling has no upside.

Maharaj-ji asked us to “Give up anger.” What if He asked you to give up quarreling as well? Is turning the other cheek too much to request? Paul extolled the Philippians, “Do everything without complaining or quarreling, so that you may be blameless and pure, children of God without fault in a crooked and perverse generation, in which you shine as lights in the world.”

If you decide to stop harming people, you’ll care deeply about the ants – I promise you. If you choose the path of ahimsa, you’ll eventually give up altercations altogether.

Blessings for your journey!