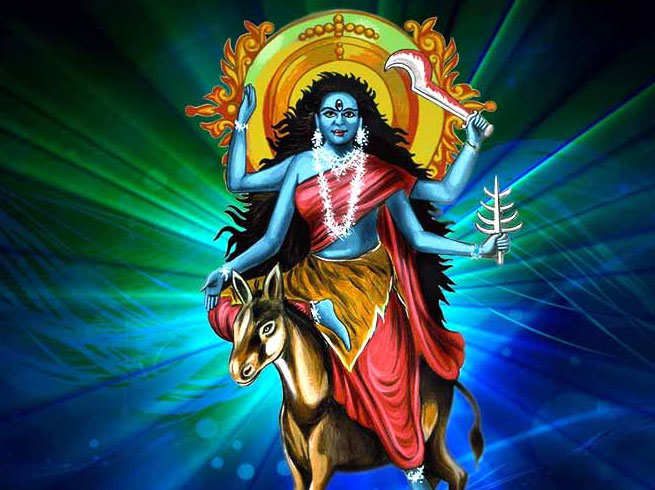 Goddess Kalratri also called Maa Kali is the 7th form of Goddess Durga. She is worshiped on the 7th day of Chaitra Navratri. She is the most ferocious avatar of Maa Durga. This form of Maa Durga destroys all demons, ghosts, negative and evil energies. She is believed to be the destroyer of time and death too. Her name is “Kaal Ratri”because she is the power of the darkest of nights. She has a very dark complexion and long, untied hair. Goddess Kaalratri is drenched in blood, wears a garland of skulls and has four hands. She holds a thunderbolt and a scimitar in two of her hands, while her other two hands are in the abhaya and varada positions.

Demons like Chandha, Mundha and Raktabeej were so powerful that Maa Kalratri was unable to kill them. So, Goddess Chandi created another goddess from her forehead, who came to be known as Devi Kaalratri. Devi Kaalratri fought Chandha and Mundha and eventually killed them. After this, Goddess Kaalratri went on to kill the powerful demon Raktabeej.

Raktabeej possessed a special blessing or power from Lord Brahma that if any drop of his blood fell to the ground, another lookalike of him would be created from that drop. When Maa Kaalratri fought and injured Raktabeej, several lookalikes of him were being created. Looking at this, Maa Kaalratri got immensely furious and started drinking the blood of every lookalike of Raktabeej. This prevented Raktabeej’s blood from falling to the ground and eventually he was killed by Maa Kaalratri and she brought peace back to the three worlds.

Maa Kalratri blesses her devotees with siddhis and nidhis, namely knowledge, power and wealth. She gives auspicious and positive results to her devotees, making them fearless. This avatar of Maa Durga is known to remove darkness and negativity from the lives of people. She also symbolizes purity, divinity, and feminine power.

To worship the Goddess Kaalratri, offer jaggery products or food made from jaggery as prasad to Maa Kaalratri. Devotees also perform the puja on Saptami night and they offer sindoor, kajal, hair oil, shampoo, nail paint, lipstick, mascara and two sets of all products normally used in makeup.

Chant this mantra to get the blessings of Maa Kalratri

अम्बे तू है जगदम्बे काली
You are doing much better than you think!