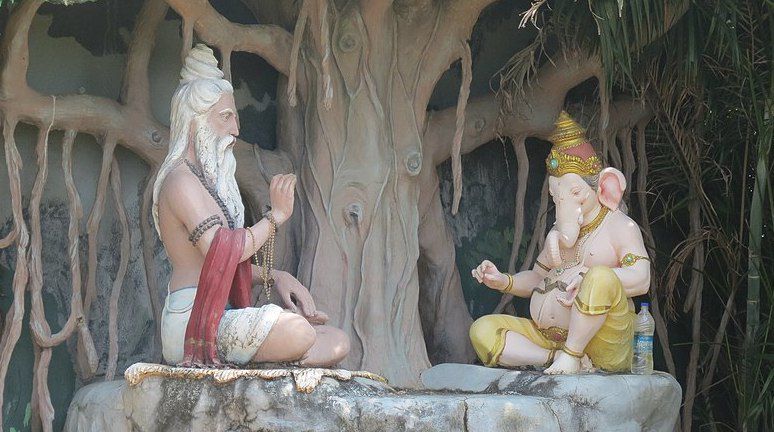 In 2017, Sankara Rama Dikshitar started delivering a 9-day Mahabharatam discourse in Chennai. Usually, these lectures summarize the entire text in a span of 9 days. This series, however, was intended as a yearly event. Therefore, he elaborated each parva of the Mahabharata in great detail. The discourse series continued in 2018 and 2019, when the pandemic struck in 2020. After a two-year hiatus, the series resumed again yesterday, to the delight of the regular attendees. I have had the privilege of listening to all the lectures in all years thus far.

This year, I plan to write about salient points from each day of the discourse in a 9-part series in os.me.

Nothing happens without God’s will. Without His will, not even a blade of grass will move. However, when there is destruction in righteousness, the Lord takes an avatara to right the situations and re-establish Dharma. The Puranas, upapuranas, itihasas and other texts tell us how to live, how to attain sat-gati, on living a life in accordance with Satya and Dharma.

There is not enough time to know even the names of all the texts in Sanatana Dharma, let alone study them all.

Don’t waste time. Your life span is diminishing every moment. When the time comes, Yama will show you no mercy. Therefore, spend any time you have in spiritual pursuits.

Sankara Rama Dikshitar recited the above verse and exhorted the audience to spend as much time as they can in satsanga and other spiritual activities.

In 2019, the last lecture was on the Yaksha Prashnam, where Yudhishtira answered the Yaksha’s questions capably. This year’s discourse is on the Virata Parva. Dikshitar mentioned that whenever rains were needed, in the ancient days, one of the remedial actions people performed was to do a parayanam (recitation) of the Virata parva of the Mahabharata. 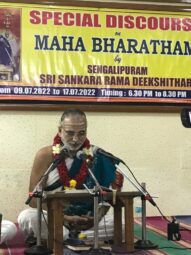 Janamejaya, who was listening to the Mahabharata from sage Vaisampayana, had a doubt here. A small fire can be covered by a box. A small gush of air can be redirected. A small glass of water can be covered with a lid. A small object can be easily hidden. However: A blazing fire can’t be stopped. A whirlwind brushes over cities at large. A deluge floods cities and can’t be stopped. Similarly, how can someone as big as Bhima be hidden? Is it even possible to go for a whole year without being recognized?

Yudhishtira bade farewell to all the sages and other fine people who spent time with them over 12 years, to begin the ajnata vasa. He was, however, disturbed. The first reason was, of course, separation pangs upon the idea of parting ways with the fine sages. Secondly, honest and straightforward people don’t engage in deception. Living a life in disguise – isn’t it deception?

Sage Dhoumya, who had assumed the mantle of the Pandavas’s Guru in the forest, assuaged Yudhishtira. Devas themselves lived under disguise when the circumstances called for them, Dhoumya told Yudhishtira. When Indra lost his kingdom, he lived in a Nishada Brahmana’s place. Surya lived in disguise on an occasion, as well. And Vishnu, the Lord of Lords, assumed a variety of disguises – for worthy causes. The Vamana avatara was a prime example. Indra killed Vritra from behind. These are but some examples. Listening to this, Yudhishtira was mollified.

The next order of business was to figure out where to spend the year. Arjuna reeled out a variety of suggestions. Out of the suggestions, Yudhishtira chose the kingdom of king Virata. In modern India, it is believed that the city of Beirut, 52 km from Jaipur, was the kingdom of Virata.

Yudhishtira decided to be the sabhasthara of king Virata. A sabasthara is the person with position next to the king, who wields the same respects the king does. He decides to go by the name Kanka. When interviewed by the king on his credentials, Yudhishtira plans to announce his skills in astrology, shakuna (signs), nimittas (omens), ganitha (mathematics), vedas, vedangas, dharma, artha, kama, neeti shastra, and conclude by saying that he was the sabhasthara of king Yudhishtira.

Yudhishtira was worried about Bhima’s disguise – how can such a hefty and well-built person be incognito?

Not to worry, said Bhima, announcing his plans to be the head cook in the palace. The head cook supervises and doesn’t do the work, yet commands the big bucks – which is as it should be, since his supervision on the ratio and proportions of various ingredients makes or breaks the meal.

Also, people generally don’t visit the kitchen – they enjoy the meals if they don’t know the details of how it is prepared – which makes it all the more safe that Bhima won’t be outed. Furthermore, Bhima is a bhojana-priya – he loves food – what better place to work than the kitchen?

People generally refer to Bhima as a great wrestler and a gadha (mace) warrior. Bhima, however, liked to think of himself as an ace cook. In the Mahabharata, there are two chefs who are highlighted. One is Nala and the other is Bhima. Nala goes by the book, and measures his ingredients with great precision. This methodology of cooking is known as Nalapaaka. Bhima, on the other hand, can measure the ingredients just by his eye, and doesn’t go by precise measurements. This methodology of cooking, which is seemingly approximate but is really not when a master chef is at the helm, is known as Bhimapaaka.

Arjuna was a great archer. A savyasachi (an ambidextrous person). Praised as the 12th Rudra, 13th Surya, 9th Vsu, 8th Mara. Yudhisthira was now filled with supreme worry – how on earth could Arjuna go incognito?

Arjuna said that he was going to disguise himself as a lady, going by the name Brhannala. He would teach the arts to the ladies in the palace – dance, music, and the works.

In any case, Oorvasi had cursed Arjuna when he visited the Devaloka that he would be a eunuch for the rest of his life. Upon Indra’s request, Oorvasi amended the curse and reduced the duration to 1 year. The curse was pending, and this was a perfect moment to exhaust this curse.

Nakula was a roopavaan, an extremely handsome person. Yudhishtira worried – how will Nakula position himself in the upcoming year?

“I will work in the stables. I like horses. I know a lot about horses. I know ashva-shastra. From the color, smell, voice, texture of the horses, I can identify precise information about a horse, right up to where it was born”, said Nakula.

Sahadeva was extremely intelligent, and his intelligence was comparable to Brihaspathi. Yudhishtira once again worried – how would Sahadeva disguise himself?

Sahadeva said that he will tend to the cows. He told Yudhishtira that he could tell all about a cow just by smelling the urine of a cow! Long story short – Sahadeva knew the ins and outs of cows, and said he is best suited to tend to cows.

Yudhishtira was now filled with the highest of worries. How would Draupadi, who was a roopavati, a pativrata, who was to be protected by the Pandavas, disguise herself?

Draupadi had the perfect solution: She would go by the name Sairandhri, which literally translates to “female attendant”, and work as the attendant of queen Sudeshna. She will help the queen and other ladies in the palace with their attire, with their hair, and with all matters pertaining to beauty. “I possess the qualifications for this role”, she informed Yudhishtira.

Now, the make-up artists of today completely alter how a lady looks with their make-up. Not so in Draupadi’s times.

Draupadi’s beautician skills would retain the natural beauty of women while embellishing their looks.

Dhoumya told Yudhishtira, “Though you know how to conduct yourself in a king’s court, I’ll tell you nevertheless, out of affection to you.”

The Pandavas Proceed to Virata Kingdom

There is then the question of their weapons. They surely can’t go to Virata’s kingdom together with their weapons. The Pandavas went to a smasana, a cremation ground, and on top of a vanhi tree, they stashed all their weapons, and added some skulls and bones on top to make it look like person had hung himself on the tree, to scare people away. Yudhishtira prayed that the weapons should be guarded safely and should be accessible to them after a year to him or Arjuna (and not to Bhima, who might be tempted to access them before the completion of the year in a hot-headed moment).

The next question: What in the case when one of them got into trouble? They came up with a shloka, which a person would recite if they got into trouble. This would alert the remaining people that something was amiss, and they could then meet up together to help the person in trouble.

Before they entered the Virata kingdom, they offered prayers to Durga Devi in a temple outside the kingdom. “Krishna protected us for the past 12 years. Now, we pray to You, Krishna’s sister, to protect us this next year”, they prayed. Durga Devi protects us in a hurry, said Sankara Rama Dikshitar.

And they proceeded to Virata’s kingdom.

The entire discourse (in Tamil) can be found here.

From Desires, Through the Differences to Acceptance
Best Recipe