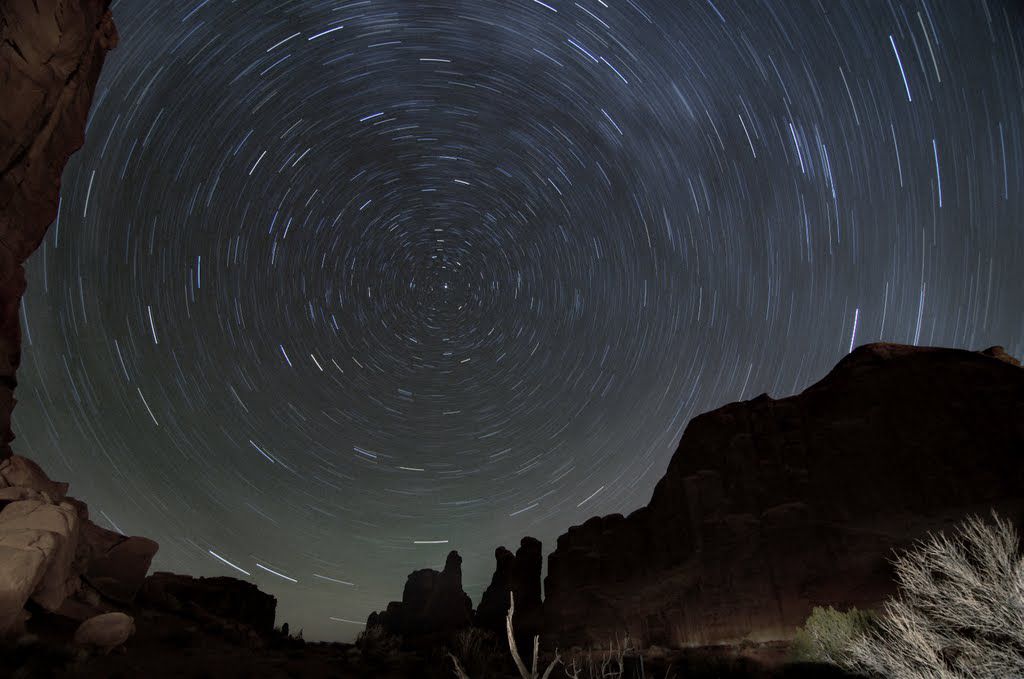 A beautiful serene night, a small boy (his pet name was Raja back then) finished his dinner and went to his grandma to listen to stories.

Who is God? Why doesn’t he come and talk to me? I have been a good boy all day, you see?
Small Raja asked his Grandma.

Grandma said: I’ve told you so many stories of God, you still don’t know who is God? Oh! I see, you naughty boy; you want another story huh? Let me tell you a story of Lord Hanuman today …

It went on almost every day, the boy eventually slept while listening to stories. His dad would come little later and carry the sleeping boy to his room.

But something very serious started cooking inside Raja’s mind. From the stories he learnt that God helps everybody! Even God helps daemons who had detrimental intentions. Some God would give boons to a daemon because that daemon was calling Him earnestly and fervently. And finally other Gods had to fight and kill that daemon to bring back peace!

If God can see everything and everybody, why can’t he just help the good people and punish bad ones? Why he would give boons to bad people? Just because they were calling Him? Raja asked this to his grandma one day.

Grandma said: God doesn’t discriminate between good and bad. Everybody is same to Him. If you call him with all your will, you will also get His grace.

Raja’s recipe was already on the stove. Boiling. His little mind couldn’t grasp what his grandma said.

I don’t like a God like that. Why would I need to call Him when He can see I have been a good boy all day? No, no, no. Somebody with a bad intention calling Him and He is giving boons? Do you think He didn’t know about that person’s intention? He gives His grace to whoever makes Him happy by chanting his names or essentially makes Him happy? Raja thought.

Raja started playing logic after logic and finally gave up with yet another serious thought:

There is no God!! These are just stories written by humans, not Gods.

Raja grown up with this idea. There is No God! He became an atheist. But he had a good attitude – he never discouraged people who believed in God. He had his own world of thoughts. He even stopped going to temples or doing “Pranam” when seeing an idol. An idol was just a nice piece of art to him.

Overall he had been a moderate middle-class boy, studious, cool and calm. Painting became his hobby then started studying science. More he studied, he found even better logic to prove there is no God. Science is The One which explains everything. Until science can explain God, there is No God! Humans worshiped rain or storms as God until science explained how they happen. Sun, moon where Gods until science explained them as just another objects like million others in the universe; there is nothing special about sun and moon.

He became a proud student of science. Studied engineering, got a good job. He was little reserved from childhood and can’t make many friends easily. He always wanted to stay close to his house. During his job training in Trivandram, Kerala, he didn’t get an option for his final posting in Kolkata. He was sad but accepted the fact and decided to move ahead with it.

There was a temple of a Devi just opposite to the hostel he was staying in. The everyday routine was like this: On return from office, when the bus dropped all associates at the main gate of the hostel, most of the people used to take left to go into the temple. But Raja, the proud follower of science, always used to take right into the hostel.

It is not that Raja never was sad before, but he never took refuge of God. He preferred to walk his own path whatever might have happened. Not getting posting in Kolkata was not a very big deal for him. He couldn’t speak english / hindi well but he could manage.

A new recipe emerged out of nowhere in his mind and started cooking on its own that day!

When the bus dropped them at the main gate of the hostel, he was not sure what’s going on in his mind, he waited for a minute there; but unlike all other days, he took left into the temple. Temple was already crowded as he was probably the last person to enter. He could not even see the Devi idol properly. From far behind, he folded his hands, closed his eyes and said: “Devi, I don’t know which Devi you are or if you exist, could you please help me to get a posting in Kolkata, I know there is no option but still if by any chance …?”. And he walked out!

Once he was back at his room, he pondered over the incident a little thinking why he went there. Just to prove there no God as there is not even an option to get a posting where he wanted? Or something else? He shook off the thoughts and continued daily chores and slept.

Next morning, in office, he logged into the company’s website portal to check where he got the posting. To his astonishment, he looked at the screen for more than a minute with awe, his mouth wide open, in clear english letters it was written “You have to report to Kolkata as your base branch on so and so date …” !!

What? Shocked to a statue. Time stood still for moments.

Only three options were given: Mumbai, Pune and Chennai and he had to arrange those as per his choice. He gave Mumbai as the first choice, then Chennai and then Pune. Then from where Kolkata came into the picture?

Miracle!! HOW? Devi? That tiny prayer? IMPOSSIBLE!! He thought, scratching his head wildly.

Science still prevailed his mind. He had to find a theory, he had to find a logic. That was just too much to digest!! Though he was happy to get his posting where he wanted, he started investigating rigorously how this happened and next day he found it!! He couldn’t sleep properly the night before.

He was from Electronics engineering. He attended a training earlier which he could not complete due to chicken pox. He was hospitalized and later sent home. He joined back training again but in a Computer science batch for some unknown reason. Next day when he found that Kolkata was an option for the batch of Electronics engineering and since he was from Electronics background and because in his last training he already gave Kolkata as his first choice, he got it now!!

Whoo!! Such a relief! he thought. Science won at last!

But something changed forever deep inside. Gradually. Gracefully. For good.

He started to atleast show some respect to God by a small gesture of “Pranam” whenever he saw an idol or a photo or a temple. He was still ignorant, with no knowledge on spirituality, he moved on with his desires for material feats. Travelling, photography, cameras, California, National parks of USA  became his passion.

It was a small incident, well neglected for years, But something changed forever deep inside. Gradually. Gracefully. For good.

He continued to show a gesture of obeisance to God whenever he saw an idol. In hard times, he started calling Her for courage. But that was it.

This endless cycle continued … Until the Universe hit him hard with a Big Blow; Until the hardships of life broke him down like a frail twig; Until his pride, ego, desires started to wash away; Until Spirituality entered his life; Until he started gaining REAL knowledge which now gradually pulling off the veil of maya showing the path to The Truth.

It has been more than 15 years from that incident. When Raja contemplates on his life, he wonders to see how many such Miracles happened, and continued to happen, all the times, everyday, he just needed to open his heart for The One and look with gratitude.

We fail to recognize.

Bound by Maya and Ignorance

The truth, we can’t visualize.

And will continue to happen

Universe will teach us lessons

Each time the harder way

Until the SELF we Realize!

Somebody said it well: Our journey is like an air bubble coming from deep within a sea, one day merging with the infinite sky above.

In due course we have to merge with The One, The Devi, The OM Swami Ji, The God, The Truth, The One! Know it and walk on this path like a good boy/girl, or the Universe is going to pull your ears and drag you here one fine morning, for good.

Raja has passed half or more of his life, now seeking strength, perseverance, “Bhakti” and Guidance. Eagerly waiting to touch the lotus feet of Swamiji, waiting for his Guru. Time will come, he is certain.

Let me share one of my favorite poem too in this context:

The Road Not Taken

And sorry I could not travel both

And be one traveler, long I stood

And looked down one as far as I could

To where it bent in the undergrowth;

Then took the other, as just as fair,

And having perhaps the better claim,

Because it was grassy and wanted wear;

Though as for that the passing there

Had worn them really about the same,

And both that morning equally lay

In leaves no step had trodden black.

Oh, I kept the first for another day!

Yet knowing how way leads on to way,

I doubted if I should ever come back.

I shall be telling this with a sigh

Two roads diverged in a wood, and I—

I took the one less traveled by,

And that has made all the difference.

Based on a true story.

Thank you so much for reading 🙏🙏

Source: The featured photo was taken by me in the Arches National Park, USA in around 2010. Attaching here as well for a better view.

How stars move, polaris at the center. Everything is a Miracle in this Grand creation! No? 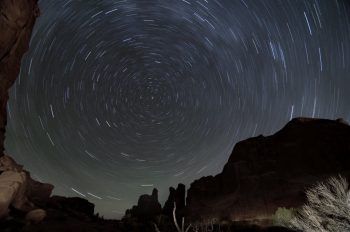 A long exposure photo capturing the movement of stars in 30 mins. North pole at the center!

A Spiritual seeker, a painter and a IT Professional. I am learning and sometimes sharing! Thank you!