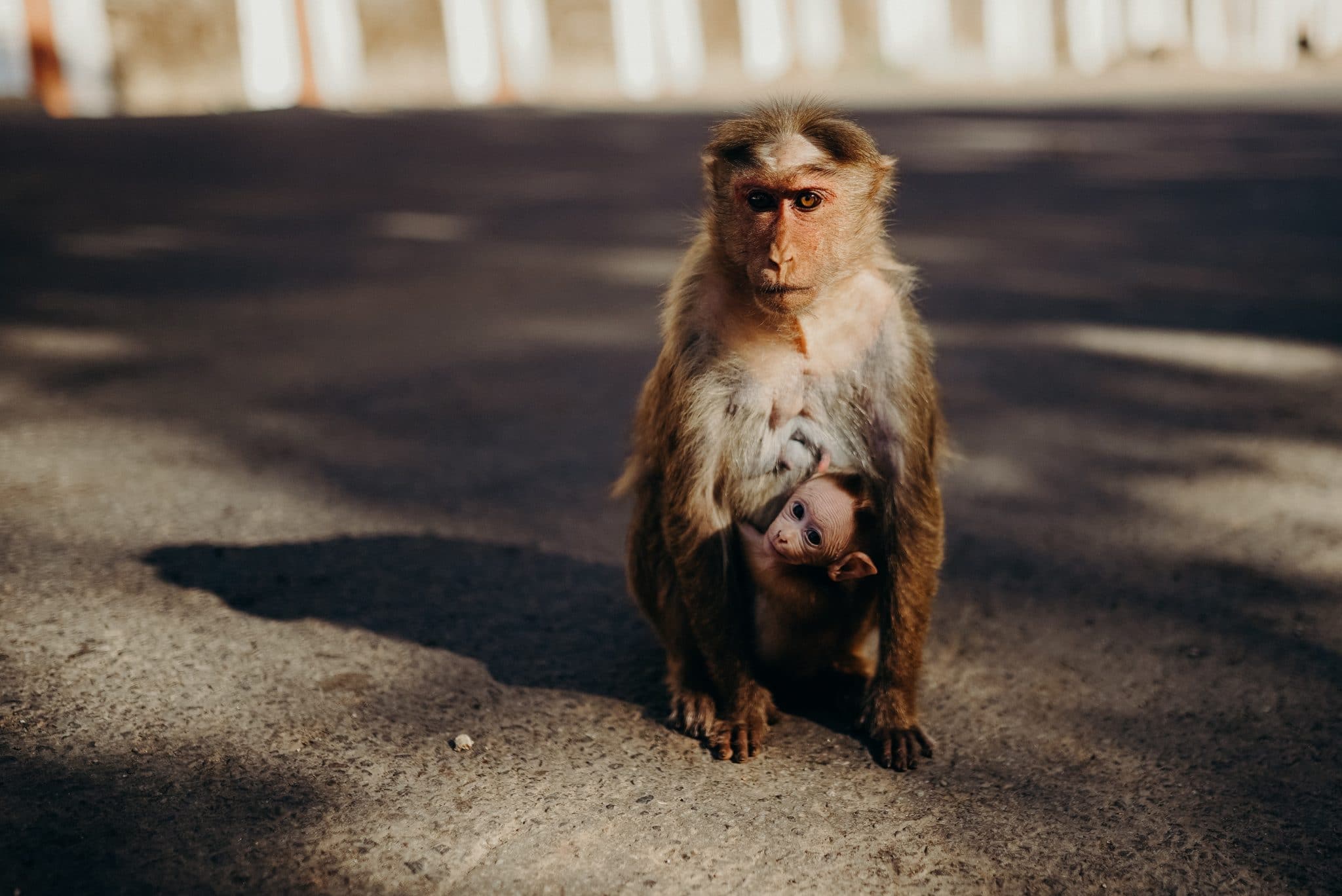 In 2015, my wife and I decided to visit the temple city of Sholinghar. There is a 1500 step trek to reach the Narasimhar temple. We planned to visit the temple and the trek would be a welcome bonus (alright, alright, you caught me, we planned to take the trek and the temple would be a welcome bonus 🙈). We reached the temple on a Saturday morning, and when we were purchasing some flowers/coconuts (I don’t exactly remember what we purchased) to take to the temple, we noticed that the shopkeepers were also renting out sticks. “Why are you renting sticks?”, we innocently inquired. “Oh, this is to protect yourselves against monkeys”, they told us. “Make sure you have your bags secured on you, be careful when you take out your cell phones; they are safest inside your pockets. And, if you take out a snack, there is a very good chance that it is history.” Forewarned, we armed ourselves with a couple of sticks and began our trek up.

During our trek, we saw monkeys everywhere. Father monkeys, mother monkeys, baby monkeys, monkeys playing, monkeys jumping from one branch to another, mother monkeys working on the lice in the heads of children, all kinds of monkey sights. Very few monkeys approached us, and for our part, we were disciplined to get our phones out to take pictures only a handful of times. There were two monkey related incidents in Sholinghar that stayed with us.

On our trek down, our throats were parched, and we stopped by a shop and bought ourselves a couple of Frooti packets. We noticed several empty Frooti packets strewn on the floor, right beside the trash can. “How hard it is for people to drop these packets inside the trash can”, remarked my wife. (As an aside, littering is one of her pet peeves. When traveling to our honeymoon, while waiting in line at the airport check in counter, the young couple in front of us littered some papers right where they were standing. “Excuse me”, my wife sweetly called out to them, “I believe you have dropped some of your belongings.”)

We drank our Frootis and discarded the empty packets inside the trash can. A monkey, which was waiting for us to finished, picked up one of the packets. With calculated precision, the monkey tore open the Frooti packet in such a way that it had access to the remaining contents (which was a sizeable amount, to my surprise), and finished the Frooti off. The monkey then proceeded to repeat this maneuver with the other packet. Oh well, sorry fine people who had drank Frootis before us, you were indeed solid citizens who ostensibly discarded the packets inside the trash can!

The Incident with the Goat

Towards the end of our trek back, we saw that some devotees had given a banana to a monkey. This monkey was eagerly looking forward to enjoying the snack. Out of nowhere, a goat came, and snatched this banana away from the monkey. We will never forget the look of shock on the monkey’s face. If I were to guess, the monkey would have been thinking along these lines: “Whatever happened to humanity? Is there no justice in the world anymore? How could the goat do this?” We felt sorry for the monkey and gave our banana which we had received as Prasad. The goat came back again, to try and snatch this banana as well. Forewarned is forearmed. The monkey, fully prepared this time, was having none of it, and fought its way against the goat and enjoyed the banana.

The Incident at Pazhamudhircholai

I know I promised two monkey incidents. You get a third one entirely free of cost 🙂 The third monkey incident was at Pazhamudhircholai, one of the Arupadai Veedu of Lord Muruga. This was a family trip, and at evening 6:30 pm we had our Darshan and came back. We opened the trunk of the car to retrieve something, and before we knew anything, a monkey snatched a paper bag, which it thought was filled with snacks. It went a fair distance from us, made an opening in the bag, and to its disgust, the bag contained packets of green tea! My Mom loved to have some green tea in the hotels in preference to regular tea, and had carried some with Her. Having determined that the bag of green teas is of no use to it, the monkey threw the bag onto the ground. Having determined that the monkey had determined that the bag was useless to it, I went to retrieve the bag. “Prahalad, don’t! The monkey could hurt you”, my Mom exclaimed, concerned. I did manage to retrieve the bag successfully, we made our way back to our hotel. It struck me that as soon as the monkey found out that the bag was not useful, it got rid of it. By contrast, humans keep hoarding all kinds of stuff regardless of whether they need it or not.