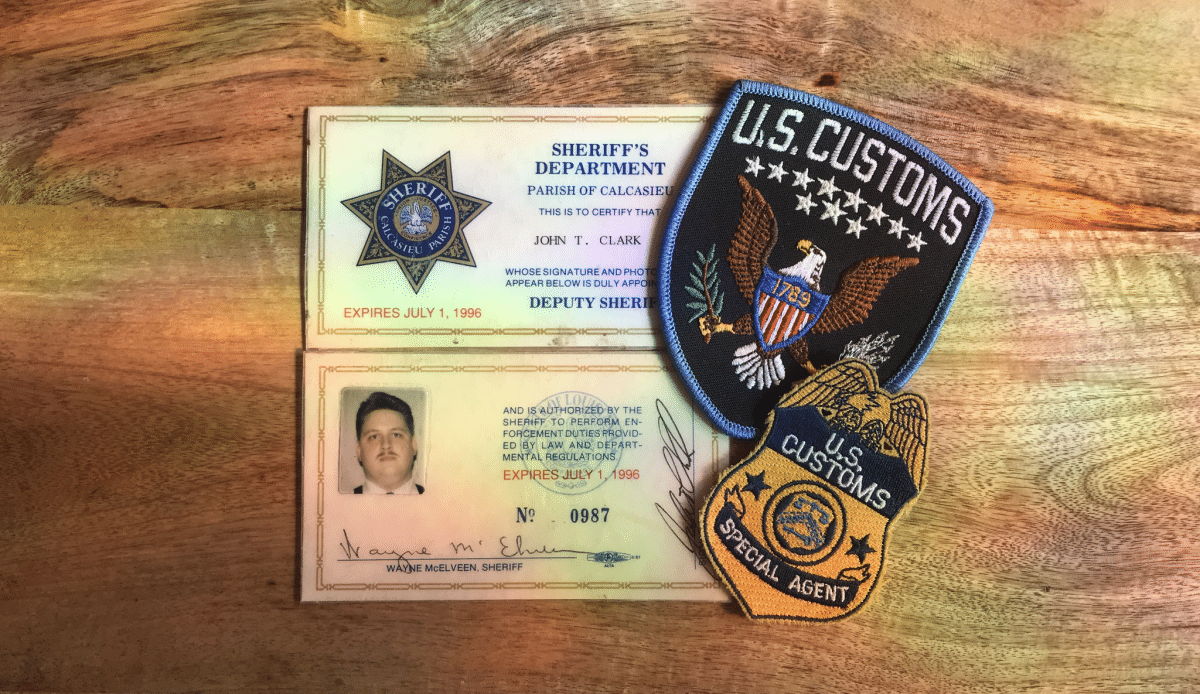 Monster Hunting With US Customs Enforcement

Serving my country, protecting the most innocent

About 25 years ago, I owned a personal computer store in my hometown in Louisiana. Many of my friends were police officers who hung around the premises during the day. My mentor, R. Brooks Fleig, was the chaplain for both the police and sheriff’s departments during that time of my life. He was also an expert in occult crime (satanism) and travelled around Texas and Louisiana, assisting other departments with occult-related cases.

One day I was sitting in my private office in the back of the store when two men appeared in my doorway looking precisely as if they had stepped out of a Men In Black movie. One of them flipped open a badge and said, “US Customs Enforcement, may we come in?” To be honest, at that moment, I thought, “Oh shit, what have I done now,” but said, “Sure, have a seat!”

They went on to tell me they had approached my mentor Brooks for help, and he had referred them to me. It seems a new method of data transfer had come into being that no one in federal law enforcement understood — the internet. For reference, this was in the days of partially compatible PC clones, 9,600 baud modems, AOL/Compuserve dominance, and windsock. If you don’t know what those are, don’t be alarmed, no one does anymore. Suffice it to say, the feds wanted to learn about the internet.

“Child pornographers are running rampant,” they told me, adding “And we need your help to stop them. Your mentor told us nobody knows more about computers than you.” Shortly after that meeting, I got a commission from the sheriff’s department. I agreed to help them (for free as a volunteer) in an undercover capacity to stop crimes against children.

The team I worked with ended up creating the most successful child-porn sting operation in US history. Over the course of five years, we identified more than eleven hundred suspects, many of which were prosecuted and jailed. I trained agents, gathered evidence, developed websites and programs to trap criminals, and even testified in court against some of them. A few produced and sold pornography, but most got prosecuted for possession.

The people we went after included super-low-class individuals as well as established people in communities, including doctors, lawyers, dentists, military officers, business people, etc. They came from every walk of life.

When the feds went after some low-income person, their premises were often raided, and they went to jail immediately. But when they were going to charge some prominent member of the community, they would sometimes go to their workplace, sit down with them and tell them they were under arrest. They would then give them an appointment to appear at the feds office and get booked (officially arrested).

It wasn’t uncommon for these prominent people to commit suicide after finding out they’d been caught. For example, a well-known lawyer was caught in our sting. The feds went to his office on a Friday afternoon, just as all his employees were leaving. After their talk with him, he called his wife to say he was going hunting for the weekend. He was found early the following week having committed suicide in his deer stand.

During my time with US Customs, one of the assistant sheriffs got arrested for sexually molesting his grandson. Brooks went to see him in jail a few days after his arrest. The man had been cutting both his arms, eight to ten slices on each one. When Brooks asked him, “Why are you doing that to yourself?” He replied, “It’s the only way I get relief from the pain.”

My father was a monster. He sexually molested my three brothers and me. In my case, it started when I was about three, and it ended about the time I was nine. The devastation he left in my life and the lives of dozens of others lingers to this day. My father’s brother, Robert, was an extremely talented artist and a severe alcoholic who continually beat his wife and children. Were these two brothers born this way? Scientifically, the evidence shows one in six men has been sexually abused (1in6.org).

There’s a lot of talk these days in the media about prominent people supposedly being involved in child slavery and sexual exploitation. I feel my experiences have made me an expert in this field, both as a law enforcement officer and a victim. Most of the famous people being accused are entirely innocent. How do I know? In personally experiencing this type of pain and witnessing it hundreds of times, I recognize it quickly. It causes a person to feel utterly worthless, something they must wrestle with continually.

Lots of people get sexually abused and don’t go on to sexually abuse children. However, they often end up addicted to some drug or pharmaceutical, become an alcoholic or rage-a-holic, underachieve at work/school, and have severe issues with intimate relationships. In some manner, the poison put into them as a child will seep into every area of their life. All the while, society puts some other label them other than what they are – a victim. In the case of people convicted for possession of child porn, they end up in high-security prisons that make them into even greater monsters and deepen their pain.

By the grace of God, I’ve been able to escape the cycle that my father attempted to put into my life. However, the pain of worthlessness remains. All my life, my family wanted me to hide all the secrets. The problem is, if we don’t talk about the horrible things happening in one in six houses, it can’t be stopped.

My oldest brother apparently got it the worst from our father. He has a twenty-five hundred square foot home that was built about thirty years ago. The only way inside is through the back door, where you need to climb over a three-foot-tall pile of old lumber and building supplies to access the door. Once inside, there’s a little tiny path that leads up to access only one bedroom and a bathroom. The rest of the house is piled full of junk and trash. It’s one of the most severe cases of hoarding I’ve ever seen. He drives a Chevelle from the ’60s that looks like a rust-bucket. The only open space in it is the driver’s seat – the rest is full of tools and other goods. If you go to my youngest brother’s mechanic’s shop, it’s the same thing – piles and piles of useless stuff that should have been trashed years ago. I was in my thirties when a psychologist explained that hoarding was almost always triggered by severe sexual abuse. People collect stuff to distract from the pain. I used to horde as well – I became a minimalist to escape this addiction.

I trust as you read this, you’ll take away several truths:

1) Monsters are only created by other monsters.
2) It’s one in six men – it’s a lot of people you know.
3) If it’s ignored, it gets severely worse.
4) The damage done is for life.
5) Very few escape the cycle of destruction.
6) Falsely accusing people of this crime is the height of irresponsibility.

Most importantly, if you suspect a child is being abused, report it. If you don’t, you’re a coward, and that’s it. No one has the right or reason to destroy or damage an innocent soul.

How I Got My Kids to Meditate
La La: An Unlikely Fairy Tale