Mother Earth is Going Through Her Menstrual Cycle.

The Tantras refer to Ma Kamakhya as the Mother of all Deities. Kamakhya is the one who grants and satisfies desires. She is the Parabrahman itself; the world was created out of her erotic desire. Shiva says in his tantras that there is no power greater or equal to her. She is the Yoni, the womb from which the universe was born, making her the goddess of all mothers. Her Yoni gave birth to the Brahma, Vishnu, and Shiva deities as well as the three facets of existence, the sattva, rajas, and tamas gunas. She is both primordial emptiness and manifested form, the first reverberation of universe, the Om pranav or Omkara was born from her yoni. She gave birth to the Dasha Mahavidyas. Numerous devatas have been born from her, including the Trinity of Bramha, Vishnu, and Shiva. She is the mother of all elements, matter, and energy types. Nothing in the universe can compare to her greatness.

The primary Kamakhya temple is located in Assam, India, not far from Guwahati. The temple dates back to the 10th century and is situated in the Kamrup (literally, the embodiment or manifestation of desire). According to a puranic legend, this is the location where the Yoni of the Goddess, which had been divided into 51 pieces by the Sudarshana Chakra of Vishnu, fell to Earth, Nilanchal Hills. The Kaula Shastra was allegedly introduced at Kamarupa by Matsyendranath, the founder of the Kaula and Natha traditions. The Kalika Purana and a large number of Varna or Kaula tantras both praise the goddess in her kamakhya form. 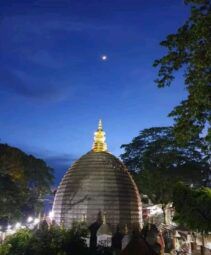 Kamakhya Shaktipeetham is one of the Mahashaktipeethas, the highest seat of Shakti. ‘Inside the cave there exists a very lovely pudendum on the stone which is 12 angulas (9cm) in width and 20 angulas (16 cm) in length gradually narrowing and sloping. It has a reddish hue similar to saffron and vermillion.The Kaamrupini Goddess Kamakhya, primordial force resides here.’ The holy place emphasises Kamakhya’s central significance as the yoni of the Mother Earth itself and affirms the yoni’s fundamental role in srishti, creation. 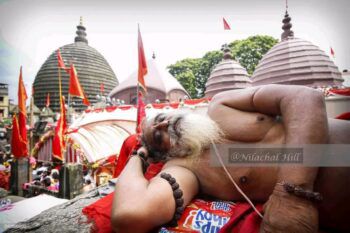 Sleeping in her Lap

Her Yoni peetham is worshipped with special offerings during the Ambubachi festival, which honours her menstrual cycle. While she is menstruating, Mother blesses her followers, sadhaks, and siddhas. She is also the Goddess of eroticism, fertility, and beauty. Your life is sustained and transformed by her. When the temple reopens after being closed for four days during the Ambubachi festival, it is thought to be the most fortunate time to offer prayers to the Mother.

For next 4 days let’s meditate on her.

Trust me these days are so auspicious. Utilize them and for your knowledge let me share something from Devi Bhagwatam. I read this few months back and today I’m sharing this. 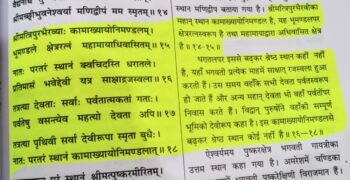 (I started the series When She Calls, instead of completing that today I’m sharing a post on Ambubachi, series will continue. Whenever I’ll feel to share my journey, I’ll share. Jai Jagannmata!)