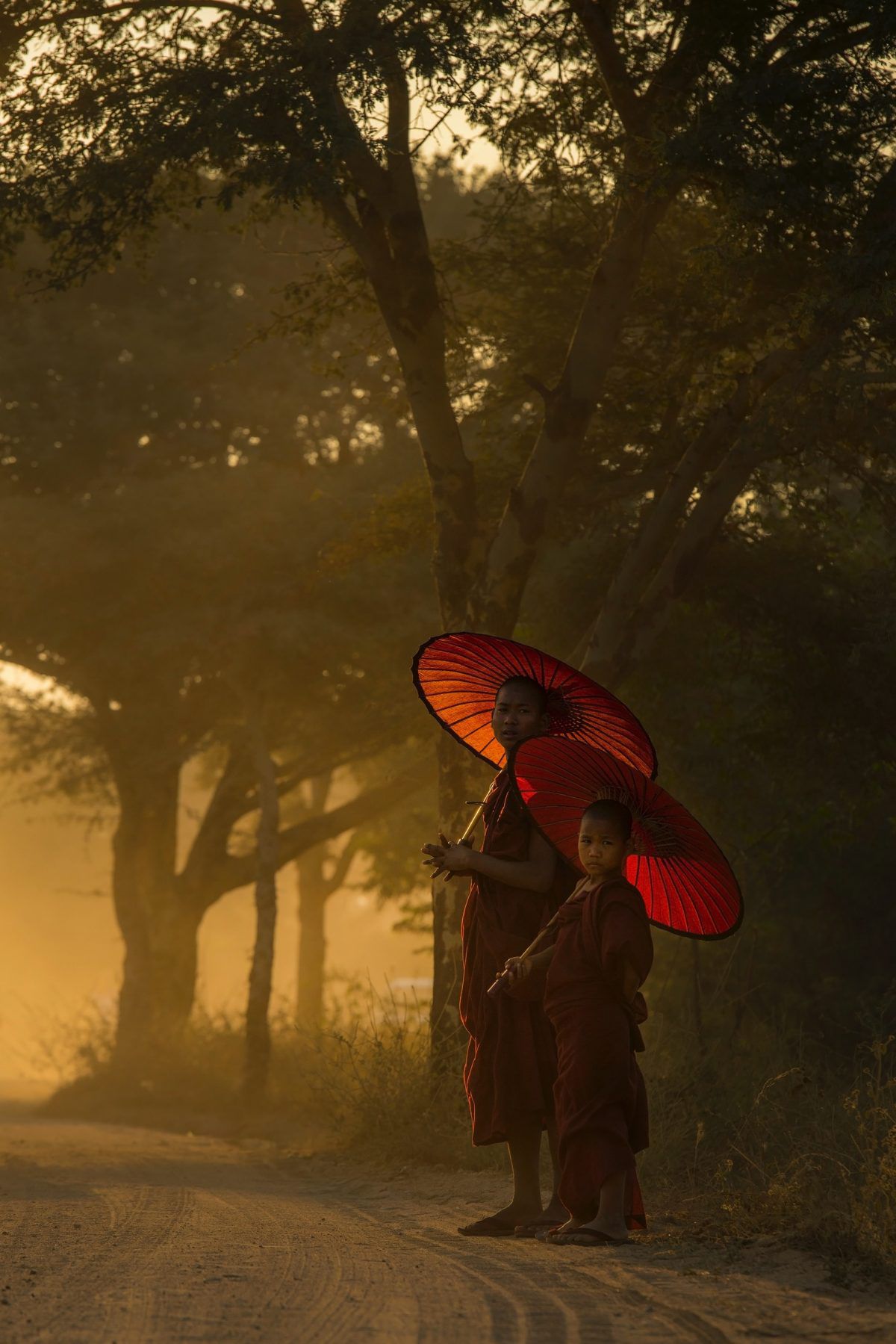 My First Attempt at Becoming a Monk

The newspaper rustled in my small, eight-year-old hands. I was so enchanted by an article on how to meditate, I didn’t notice that my cousin had entered the room.

“What are you reading?” he asked, looking over my shoulder.

“Nothing,” I replied, snapping the paper closed. But it was too late.

“Meditation? That’s boring. All you do is sit around with your eyes closed and breathe.”

“Yeah,” I agreed, not wanting to seem boring. However, I was intrigued. The article revealed how meditation made it possible to explore an entirely new realm within one’s mind— a secret place that many people didn’t even know existed. That sure sounded like an exciting way to start my summer.

As soon as my cousin left the room, I opened back to the article to study the accompanying photograph. The caption said, “look deeper, and you will find it”. A monk sat cross-legged on a rocky outcrop ringed by jagged mountaintops and smattered with snow. Despite the obvious cold, he was bare-bodied except for a piece of yellow cloth around his waist. His eyes were closed, a serene expression on his face. I decided I wanted to meditate like the monk.

I searched the house for an appropriate place to sit in silence. Since I lived with my grandparents and several of my aunts, uncles, and cousins, it was a difficult task. The only quiet place I could find was the awkward, neglected alcove beneath the stairs. It would have to do. I crouched down, sweeping out the old cobwebs and dust with my hands. Then, I arranged a few pillows in strategic locations to make it more comfortable. Since it was a typical summer day, I began to sweat after just a few minutes of moving around the cramped space. It was a far cry from the beautiful, snowy mountaintops in the picture.

The closest I had ever come to seeing snow was when I scraped at the frost in our old freezer. I once made a miniature snowman by forming the soft, white ice flakes into lopsided rounds and stacking them on top of each other. I used two tiny black mustard seeds for the eyes, a carrot peeling for the nose and an eggplant stalk for a hat. I left my creation in the freezer and promised to visit him often, but when I went back a little later, he had been crushed. Perhaps one day, I thought to myself as I wiped the sweat from my forehead, I will visit the Himalayas where I can make a real snowman and sit in the snow like a yogi.

I poked around for additional items to include in my mediation den. Although the altar in the family prayer room had oil lamps that flickered with real fire, I knew I would get in trouble if anyone found out I was lighting my lamps. I found a flameless electric candle to use instead. I also borrowed an idol of Ganesha— the remover of obstacles.

After all, the newspaper article had warned of several barriers one must overcome during meditation. I didn’t know what they were, specifically, since they had been written in Sanskrit, but I knew having Ganesha around would helpful. Once I placed the electric candle at the idol’s feet, I knew I was set for the grand event—my first meditation. However, I was tired from all the cleaning and preparation, so I decided to postpone it until the next morning.

As I lay in bed that night trying to fall asleep, I could hardly contain my excitement. I felt like an explorer about to set sail for an exotic land full of gems, silver, and gold. When I was finished with my meditation, I would tell my entire family about all the treasures I’d found hidden in my mind. They would sit around me in a circle, their eyes wide, listening to every word. When I was done talking, they would congratulate me on my new discoveries. From that moment on, I’d be treated as a grown-up. At dinner time, I would be invited to sit at the head of the table, next to my grandfather.

My grandfather. Periodically throughout the year, he presented gifts to his grandchildren for notable achievements in sports and studies. Since I was weak in sports, and some of my cousins made higher marks than me in school, I imagined my spiritual accomplishments would allow me to, at last, shine in his eyes.

As I tossed and turned in bed, I realized I would have to wake up extra early to have enough quiet time for my mental journey. The last thing I needed was for the other kids in the house to be making noise at breakfast—scrambling over idlis and dosa—while I was exploring the lands of enlightenment. Since I didn’t have an alarm clock, I decided to rise at dawn with the call to prayer from the nearest mosque. There was no better way to wake up than to the soothing, rhythmic incantation coming over the loudspeaker, even if I had no idea what it meant.

At 5:00 a.m., the muezzin’s distant, wailing call sounded through my sleep. I slipped out of bed, tiptoeing to the door. The squeak of the turning doorknob almost exposed my plan. My brother stirred in his bed when I opened the door. When I was sure he wouldn’t wake, I snuck down the hall and took a bath using cold water from an unheated copper vat. Shivering, I donned a yellow shirt, thinking of the monk in the picture wearing nothing but yellow cloth. I crept into the prayer room and adorned my forehead with a pinch of kumkum.

I made my way down the stairs, pausing on each step to listen for signs that others were moving around the house. I heard only the cook in the kitchen, preparing for breakfast, and willed myself to be quiet enough not to be heard. When I arrived at my meditation haven, I leaned over and switched on the little light. A mouse darted out from the corner. I jumped up and hit my head on the stairs. The mouse sprinted into the darkness towards the kitchen. My heart was pounding, my head throbbed. What an inauspicious start to my journey.

I sat on a pillow, rubbing the growing bump on my head. I peered into the eyes of Lord Ganesha and whispered, “Next time, can you move the mouse before I get here?” It looked like there was a smile on the idol’s face from the shadow cast by the candle. Taking it as a good omen, I settled into the cushions. I took a slow, deep breath and closed my eyes. A series of clattering sounds and shouts came from the kitchen. The cook had met the mouse. Soon enough, my grandfather was up and was hurrying around the house, banging his walking stick on the floor. I snuck upstairs, slipped into my bed, rubbed the kumkum off my forehead, and went back to sleep.