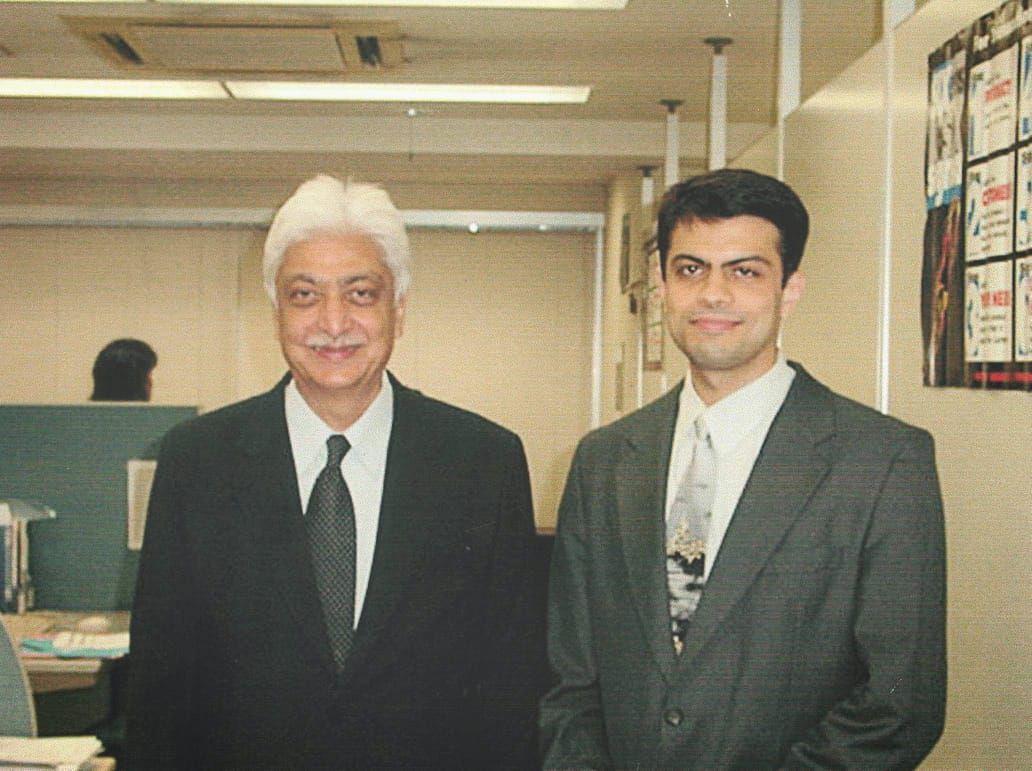 On occasion of Guru Purnima, I am sharing my learnings from the first guru in Work Life, Wipro Founder and Chairman - Azim Premji

A month back, I started a series of articles LinkedIn, on the people who shaped my professional career, who influenced me, who directly/indirectly gave me direction and made a difference many times, just by BEING there in my life. The first article of the series, on Mr Premji is what I am sharing here.

Mr Azim H. Premji is the reason I decided to write the series. Other than my late father, Mr Kishore V Sonpal, he is the person who has influenced me the most in my career. And the reason is very simple: Wipro was my first company and remains my favourite employer. I joined Wipro in my first stint way back in 1997, when it had some 5000 odd employees. And it was 120,000 plus giant by the time I left in 2011. So I had the privilege to be with the company through its golden period of growth.

My first memory of Mr Premji is that of April 1997, in one of the employee town-hall meetings after the quarterly results, where he emphasised the value of Integrity. Having joined as a fresh engineer, I did not have any idea on values and what it means for an organisation. I loved what I heard about ethics and integrity and how Mr Premji had been a stickler of the same right from the time he took up the reigns of the company in 1966.

“The greatness of this man, was his simplicity” – was attributed to Mahatma Gandhi. But I would readily say the same for Mr Premji. We all had heard about how Mr Premji shunned unnecessary spending, used to drive a old Ford Escort (though he could have easily afforded the priciest of cars) and would travel economy on domestic flights. I observed this trait in person, when I was at the corporate office in Sarjapur for a meeting. As we got in the queue in the main cafeteria for buffet meal, Mr Premji was in the queue like other people.

Few months later, as a part of the marketing team, we had a chance to attend a strategy session at the corporate office. The workshop being led by a strategy guru involved discussion on various aspects of formulating strategy and Mr Premji was sitting amongst us, with a raw MBA recruit like me, patiently listening, taking notes and engaging in group discussions.

Having a hectic schedule full of back to back meetings, its always a challenge for senior executives to stay fit. Mr Premji was extremely particular about fitness. I got a visual proof of the same when I saw him climb up the 11 floors of Wipro office in Raheja Towers on MG Road in Bangalore.

During his visits to Japan, when I was a BDM, it was interesting to observe his simple eating habits and ensuring he had all his meals on time.

My most memorable memory of Mr Premji was when we had gone for a Senior Management review meeting with Toshiba. Toshiba HQ was in Hamamatsucho, two metro stops away on the Yamanote line from centrally located Shinagawa station. Mr Premji was staying in Shinagawa Prince Hotel right opposite the station. The meeting with Toshiba was in late afternoon and meeting got over by about 6pm.

As there were no dinner meetings scheduled, I was to accost Mr Premji to his hotel. “So Hetal, what are the options for commute back to the Hotel.”

“Well Sir, it’s best we take a cab. Or we can walk up to the Hamamatsucho station, which is 10 mins walk and take the train.” I replied.

“How long is the ride in the train.” he asked further.

I was totally taken aback. Having lived in Tokyo for a few years already, I had never considered the option. But when Mr Premji suggested it, it did not look odd at all. So on that nice evening in Tokyo on a weekday, we walked for some 25 mins to his hotel in Shinagawa. He asked me about the life in city, how easy/difficult it was for Indians to adjust to life in Japan. I did not realise how quickly time passed during the walk. As we reached the hotel, he preferred to head to the room and order his dinner in.

It was quiet a humbling experience to spend such quality time with him. His nobility and simplicity and fitness levels were on full display through this simple act.

Being in the sales team, we had the advantage of many close interactions with Mr Premji. Especially when he would be visiting Japan for meeting customers. As Wipro was among the earliest to enter Japan market in late 1990s, Mr Premji had gained enough publicity in the Japanese media. The customers had a great deal of respect for him and would consider it a privilege to meet a man of his stature.

However, Mr Premji was very thorough when it came to being prepared for the client meetings. He would do his own homework, do his own study apart from the briefing notes we shared for the meeting. I remember how in a GE meeting, he had, on his own, got the necessary relevant data from his US contacts, for the discussion.

This aspect of Wipro, was trademark Premji. Right from the time I joined Wipro, there were numerous instances where company would not give heed to any unethical practices for winning business. In the software services business, where competition was cut-throat, there was always temptation of influencing the customer to a favourable decision. This was unthinkable in Wipro. It was OK to lose a business rather than to compromise on integrity.

Two aspects of Mr Premji which stood out in humility were:

His being ‘media shy’ (it was next to impossible to get a personal interview from him. His personal life was well guarded as well. In fact, forget a book on him, even mention of him in a book was something so eagerly awaited, that when Jack Welsh’s book, Straight from the Gut was published (it had a significant mention about his relationship with Wipro and Mr Premji), we shared copies of the book with our customers. For someone of his persona, he could have milked publicity and leveraged for the company, but he steadfastly refused to do so.
His charitable initiatives: If I have developed the strong belief, that charity should start right from the time one starts earning, instead of it being relegated to post-retirement activity, its clearly due to Mr Premji’s example. If there is one person who has made landmark contribution in the education sector in helping the underprivileged section of the society to benefit, its Mr Premji. And despite being one the biggest contributors in India to charity for decades now, he has never once talked about it to get publicity for himself.
On the personal side:

My late father was a huge fan of Mr Premji. While I was in Japan for ten years, working for Wipro, he was constantly reading any article that was published on Wipro in the Indian media. He would make it a point to keep the cutting and share the scan image with me and his portfolio of articles (physical copy) would be there for me when I was visiting India. His emphasis on ethics and integrity aligned 100% with Dad’s own beliefs. His strong emphasis on education as the sector which benefitted the most from Mr Premji’s charitable initiatives was also something Dad could relate to. In fact, in 2002, when we were discussing about who all to send my wedding invitation card to in Wipro, he not only sent an invite with a personal letter to Mr Premji, he even received a response from the great man (wishing me good wishes while apologising for not being able to attend.).

I will forever remain indebted to Mr Premji for having laid the foundation to my professional career, by setting such a great example himself and through Wipro, a company which has stood the test of time and did not compromise on its ideology and values, despite the challenges it has faced in its growth journey. Great men like Mr Premji leave an indelible mark on many people, just by their mere presence.

p.s. this ended up being my most popular post on linkedin and had many memorable comments on it.. in case u wish to read: