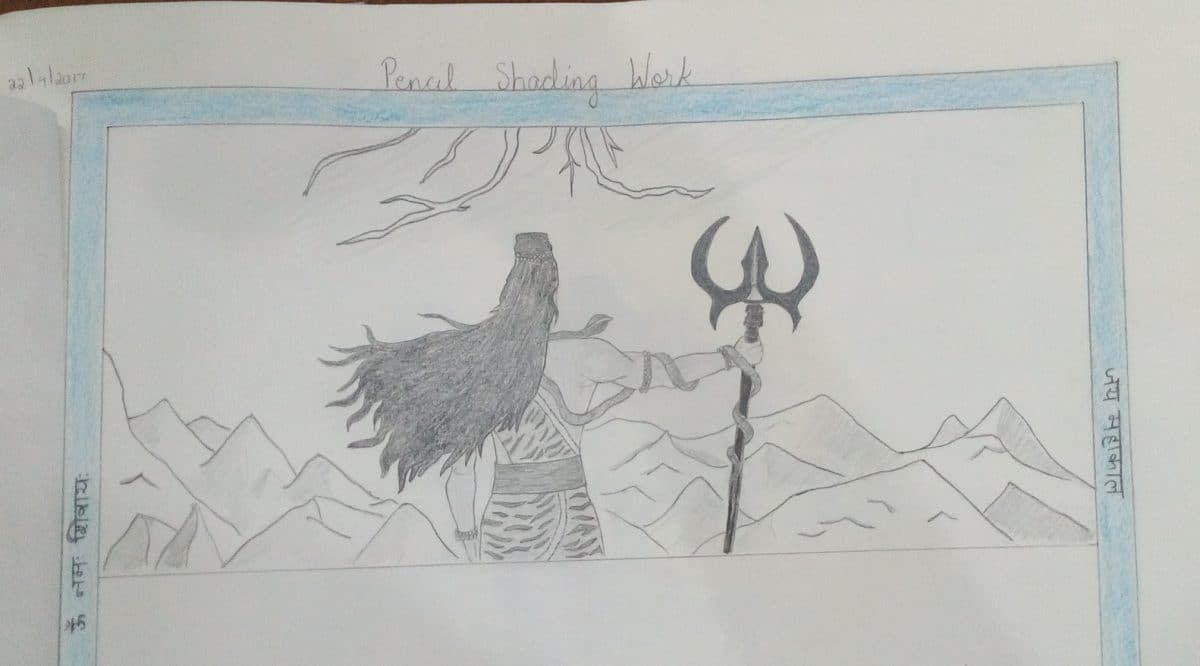 First invocation of Mother and surrender at the feet of Great Lord.

The music that went deep into my heart was – Shiva Shiva … Adi Anant Shiva … Yogi Mahadev … . I was mesmerized by the song. Yogi Mahadev- he was my Guru, ishta, master whatever you call. Around those times, devotional sentiments started sprouting. Somehow, he attracted me even though I didn’t knew much about him.

In 2016, when I was in 9th, we could issue books from library. I would search for books on mind control, science, mystery, etc. In mid 2016, I also got a little access to internet. I often searched on psychic powers, science, magic, etc. During that time, I desired to have some siddhis. I used to do bhramari, om chanting, positive affirmations, etc but not regularly. One day, in order to open my third eye, I rubbed the brow center very intensely, so much that a little part of skin got burnt and I became a laughing stock for friends as it looked like a small black Tilak and I looked like Daku Mangal Singh (I don’t know him, I have just heard this name 😅). That year I downloaded some music of DKDM which included 2-3 mantras such as karpur gauram chant. Kaun hai vo of Bahubali was my favourite. The 3 Sanskrit verses in it are 2,3,4 verses of Shiv Tandav.

Once my stomach was aching. I tied a black thread around my waist, recited a spell which I got from site spells of magic and then discarded the thread as prescribed by the site. The pain left. ( On a serious note, I don’t mean such spells always work) However, after some time, I left visiting that site as I became more interested in Sanskrit mantras.

I don’t know exactly when did I read Durga chalisa for first time. But that year, in 2016, I started reading it daily in navratri. The reason was I wanted to advance in yoga and one line of Durga chalisa goes like, “Yog na ho bin Shakti tumhari” and qoutes the example of Adi Shankaracharya. On Durgashtami of Sharad Navratri (in Sep-Oct), I invoked mother for first time. It was evening time and sun had already set. I took the Durga Chalisa, a dhoop stick, matchbox, rosary and went in the study room where I meditate and locked the door. I lit the dhoop and placed it in one corner of room. I don’t remember what I did exactly. I probably made some mental offerings, read chalisa, switched off the light and chanted a short mantra of Ma Durga given in Chalisa using rosary. After finishing the chant, I got up and switched on the light. The whole room was filled with white smoke of dhoop, everything looked so strange, I was sweating, there was a strange silence. (can be compared to a horror movie scene)

Later in winters, I got up at midnight, went to bathroom and vomited dark reddish liquid probably blood along with some semi solid mass. This went on for 2-3 mid-nights. Parents were worried. But I assured them that everything was fine and I was not feeling anything wrong. I managed to prevent an encounter with the doctor. Now I think it was a deep cleansing of my body.

In Jan, 2017, after the tragic end of my love story, I was left alone and so I surrendered completely at the feet of Mahadev. I was a pashu (animal), but he was my master Pashupati, I was his responsibility now. I was inspired by character of Veerabhadra, I wanted to be like him: strong, invincible, yet a faithful servant of Maharudra. I don’t know when, I began to ask him that may all my actions be directed towards you and bring me towards you. During those times I remained an angry young boy. Whenever I shouted at someone, I regretted it later. I considered my anger as fire which could be constructive as well as destructive. I would often exercise in anger.

In April 2017, when I was in 10th class, our art teacher gave us homework of pencil shading work. I found a photo of Shiva in a recent newspaper and drew the sketch which is the feature image of this post. I drew it so slowly that it took me more than 1 hr to draw such a simple sketch. While drawing, I got absorbed in it. After finishing, the desire that came up was, ” Turn around, please turn around, please turn around.” After some days, we got homework of colour pencil drawing. What I drew will be the feature image of next post. Now it took me about 10-15 mins to complete his abhishek which was now much more than a plain ritual.

I had one more strange experience that year. After reading a lot about astral travel, I was determined to do astral travel. It was afternoon and mother and sister were already asleep (which has been my time for searching about such topics for years!). I lied down, eyes fixed at the roof. This was one technique of astral travel. I kept staring at the roof, my eyes became heavy and I went into sleep state. I saw some flashes which I forgot when I got up. In the evening, we visited Nani out of the blues. Cousins were not home so I switched on the TV, sat on chair and flipped through english movie channels. Suddenly, I stopped. I saw the same things in a movie that I had seen in those flashes, exactly same. It was more than a de javu experience. I still remember the movie was some part of Final Destination and it was a scene related to cartwheel. At school, none except my bestie believed me.

In mid 2017, I found something was going to give me a direction. What? Where? How? In next part.

Whose Home Are You?
For my dearest swamiji 😊🙏🌹🙏