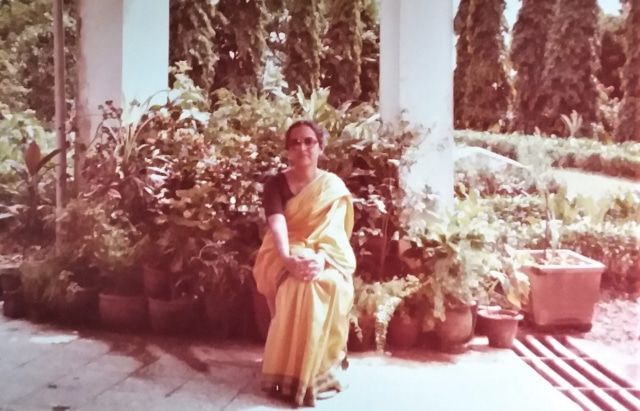 My Woman of Substance My Mom

MY WOMAN OF SUBSTANCE MY MOM

Driving down to Vasco da Gama, quite close to our place, our car took a turn in a direction that I had never seen before. We entered a narrow lane that winded down, past brightly painted little houses, and within a few minutes we had reached the point where the Zuari river in Goa meets the Arabian Sea.
On the way, I saw fishing boats moored along the shore as well as out at sea, and the smell of fish in the air told me that we were driving through a fisher folk locality. We were on our way to see a different kind of ship sail away, though. One carrying my mum to her place in the skies. We were going to the cremation ghat for my mum’s last rites to be performed.
Located right at the seashore, where the river ends, there were vultures or kites circling over the cremation ground in what were rather unusually clear blue skies for the time of the year. The monsoons were drawing to an end this year, and with it my mother, Shantha Sundaram, breathed her last at the age of 84. She had just turned 84 on her birthday on October 4, 2021, which we had to celebrate at the hospital itself, much as we hoped she would be home by then.
The rainy season in Goa was the kindest time of the year for my mum, a chronic asthma patient. She would eagerly look forward to the rains, because then, her wheezing would stop quite miraculously and she could breathe more freely. For these four or five months of the year she didn’t have to worry about being breathless, or reach for her inhaler every few minutes. Even otherwise, she loved the rainy season in Goa..
My mother, as I have written before, was the only child and yet was raised and educated in the belief that she would work and be independent one day. Rather unusual in India in the 1940s and ‘50s, you would have to say. She did work for a few years after her graduation from Annamalai University where she studied chemistry, but couldn’t pursue a career, unfortunately. After she married my father, her attention was devoted to raising two daughters and looking after both my grand-mums. And you couldn’t fault her with ever having missed a step there.
Besides, she was stepping out of Kerala and Tamil Nadu for the first time and heading for the wilds of Assam, where my father had just accepted a job posting in the railways. She bravely went and embraced her new life with élan. In fact, throughout my father’s career, she has been a rock of stability, grace and fortitude accepting everything that came our way. She was someone my father could discuss his work with, and when there was anything particularly unsettling like say, another job transfer, she would simply smile and say, “We’ll manage it, don’t’ worry, leave it to God.
She was also lucky to have married my father. She never had to wait on him, like many Indian women wait on their husbands. She didn’t know how to cook when they were married and my dad told her parents, “I can cook, and she will learn in due time. No problem.” Of course, she did her share of cooking, with help from grannies as well, but the kitchen wasn’t her forté, nor was it expected to be.
She might not have worked or pursued a career, but she understood the value of earned income and she knew how to stretch it, managing home on my dad’s modest salary without us ever feeling the need or want for anything. Listening to her narrate how much she enjoyed experiments in the chemistry laboratory, I wish she had worked, though. who knows what she might have invented there!
In her spare time, she read the daily newspapers and magazines, and was always cued in on the latest in Indian politics. We will miss those discussions at the dining table and in our living room in front of the television set. Like every convent educated girl, she read books too, but of certain genres and authors. She loved Agatha Christie novels, she enjoyed reading most of Larry Collins and Dominique Lapierre, as well as Leon Uris. She also liked reading Pearl S Buck and Han Suyin. She enjoyed watching old English films, especially of the detective or war genre. Bridge on the River Kwai was one of her favourites. In the last decade and more, she also started watching Malayalam TV serials since she could understand the language and speak it fluently as well. Somehow, she always preferred Malayalam entertainment fare to Tamil, and that extended to films as well.