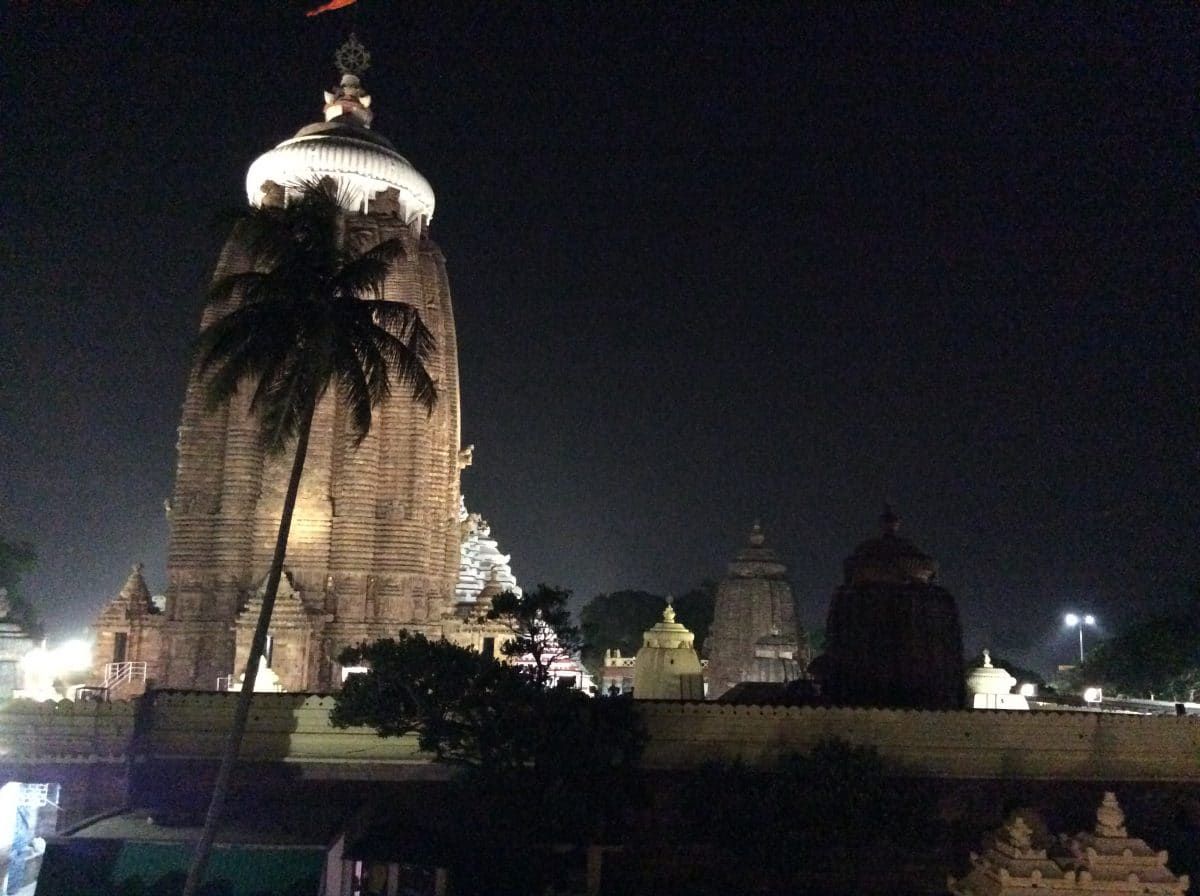 My Trip to Puri Jagannath - II

From then it was all an exciting trip to see Jagannatha on the most auspicious day of my life time.  We had a good flight time, we visited 64 yogins temple & Konark temple on the way before touching Puri.  As soon as we reached Puri, which was 2 days before the actual procession, there was traffice barricades and internet outrage for 9 kms radius and we cant go near the temple within 1 km by any car. that was a very huge setback for us, because we were 5 and we had luggages for 6 days and there was no googlemaps (data disconnected for security reason in entire Puri). I had to use my own memory of my first visit and take small lanes to reach the back entrance of the Mandir and I got stuck in multiple lanes.  Then i gave up to say loudly, “Krishna, where are you, how will we reach the hotel like this, YOU only have to come & help us”.  We were moving slowly in the lanes and one guy who seemed like sitting in the front of a house got up and asked what we are searching for, we gave him the hotel name, he spoke to our driver and went inside the house. I asked our driver what happened, he said the guy will take us to the hotel. I told him there is no space in the car, and our driver said he will bring his cycle and take us there.  And that fellow came, took a cycle out and started cycling in front of our car shouting “Side, Side, side for the car” and he kept cycling and reached our hotel.  The girl next to me was very curious and she kept telling me “ask for his name” repeatedly.  I pulled my window down and asked him आपका नाम क्या है? And guess what was his response, yes he said with a huge smile – मेरा नाम जगन्नाथ है right under the Sri Mandir Gopura before cycling off without any warning to us.  All the 5 us sat there dumbfound, speechless and took us sometime to come to senses.  Till date even after 6 years, I can hear that voice loud & clear, without any distortion see that big smile; whenever I think of that incident, I get goosebumps.

We checked into the hotel, still in daze, kept admiring the vastness of the Mandir complex (the pic in this post clicked by me), which was very visible from the hotel, since we just had a 50 feet road between the Sri Mandir and our hotel.  We all got freshened up and went to visit the temple, it was late evening. Moolasthan was not open for darshan, but we could visit the other shrines inside, so we went in.  Now the most heartwarming part of how The Divince Grace manifested to give me a go ahead for the trip itself.  We walked into The Mandir and the first shrine we see is the shrine of Prasanna Lakshmi Narasimha in his full glorious form seated in a pedestal… that gave me goosebumps.  He was sent all the way to give me assurance and also bring us all safely to the Mandir.  From then on, my mind completely relaxed and started enjoying each and every occurrence with an awe, and it goes without saying that we were experiencing the most blissful time of our life.

We went inside the Mandir, went about seeing all the shrines inside and came and sat there for sometime before winding up for the day.  Legend has it that Maa Lakshmi goes to Bhagwan’s Garbagraha every Thursday and we can hear her anklet’s noise in the night when she is returning to her sanctum sanctorum.  We were sitting there enjoying the breeze till 9.30 pm and suddenly the anklet noise started and was on for 30 mins before fading away.  We were witness to something which was only a hearsay, that again was His Grace to made us part of, live.

We went around the temple one last time thinking if we can get any passes for the main day darshan and bumped into a priest who asked how many tickets, where we are staying,  we said 5 and when we told him the place he was delighted that its going to be easy for him to reach. He said you go back to your room and let me see what I can do. We came back with pure bliss after hearing Maa’s anklets and also positive message that we might get tickets, we went on chanting and having a small satsang about Bhagwan and went to sleep.  The next day was the first day darshan for only temple priests, not even their families were allowed because of some mishap the previous year.  We woke up and were planning to go around the temple complex for general time pass, and my room bell rang.  I opened the door only to see a priest standing there saying I have tickets for darshan.  I was in tears just hearing it.  He came in and handed over the tickets which costed us 5K each, we paid him, he gave us the tickets and then the most miraculous thing happened.