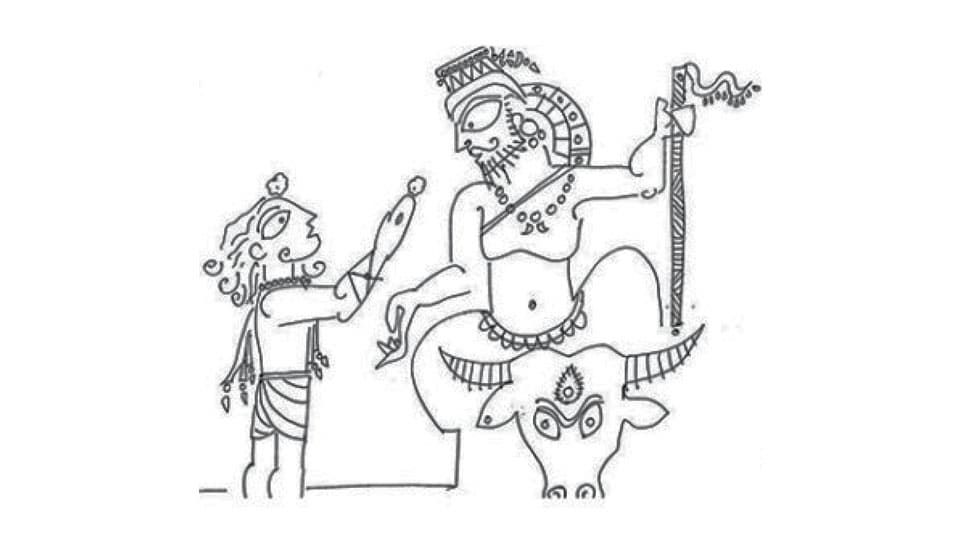 Nachiketa and Yama : Thoughts on the Upanishadic Story

A seeker's quest of freedom for continuous revolving cycle

Yesterday, Divya Vanshikaji posted a beautiful narrative of an age-old story from Kathopanishad. The story is a conversation between a child named Nachiketa and the Lord of Death- Yama. She has narrated it so wonderfully that I am reposting the link here for the details of the story:

Every story speaks to its readers and I am sharing with you all what this story speaks to me. Before sharing that, I would like to share the meaning of the name of the central character( Source Wikipedia).

Nachiketa: The word Nachiketa is made up of three root words: na( means not), chit( awareness), ketr( never-ending cycle of spiritual evolution, the word Ketu also shares the same word root). So, The boy in the story represents that awareness who does not want to be lost in a never-ending cycle of spiritual evolution. Someone who wants to break free of this cycle of life and death. He signifies the courage and determination required to embark on the sacred journey.

Nachiketa went to Lord Yama: Interestingly, the meaning of the word “Yama” in Sanskrit means twins, he is the twin lord of Justice and Death. The first spect of justice represents our karmic trail and psychic imprints in the story. If a seeker wants freedom from the rebirth and attains moksha, the starting point for him/her is to go to the cause of rebirth, his own karmas, and latent tendencies. There lies the key to freedom, and being a witness to our own tendencies, habits, speech, thoughts, and actions, one can learn the secrets of his/her gateway towards freedom.

Significance of three nights’ wait outside the house of Yama: The wait here signifies the virtue of patience to me. Patience is the quintessential virtue for the seeker who dares to even think of liberation. The journey is long and arduous. Even the most skillful, disciplined, and determined seeker needs the virtue of endless patience before the divine universe reveals the secret to him/her.

The seeker is required to wait for three nights which symbolizes three types of ignorance: Ignorance at the physical level, Ignorance at the emotional/ mental level, and ignorance at the spiritual level. We can also look at it from the point of view of gunas: ignorance due to the predominance of sattva, rajas, and tamas. Although it appears counter-intuitive, we need to rise above our sattvic ego as well to attain moksha. From the viewpoint of virtues, the three nights also symbolize extreme patience required to rise above the first three bases of emotions: desire(kaama), krodha(anger), and moha( attachment). Nachiketa shows that he has risen above these three emotions of material desire, anger, and attachment. This is also subtly indicated in the storyline where he calmly listens to his father’s angry response and obeys his instructions of going to Lord Yama ( rising above anger), he did not think twice about leaving his family for the search of truth( rising above worldly attachments) and rejecting the lavish gifts bestowed upon him by the Lord of death( rising above Material desires).

Three boons of Lord Yama:  The three boons of Yamas are indeed the three rewards of the lifelong sadhana that a seeker undertakes.

The first gifts that Nachiketa asks Yama are that ” May his father, receives him free from anger, and with a calm mind. Here is the first reward that is bestowed upon a seeker very early in the spiritual journey. He is received by the world with love and affection. The more love we put outside in the world, the more we receive from the world. Nature always bestows what we offer to the universe. As his own mind becomes calm and free from anger, the world also receives him/her in a loving manner. Love, the most sublime emotion will find its way to your heart from random sources, at random places, and at random times. Most of the seekers feel content once they find a little more love and affection coming their way but few keep walking and receive the second gift.

The second gift that he asks Yama for is: ” Please teach the secret fire ritual that one needed to attain heaven”. The secret knowledge of vaishvanara vidya. the word has come from two words: “Visva” – world and “Nara” – person. This means the cosmic person. So, he asks for a secret knowledge of sacrifice that connects him to a cosmic person. The cosmic person here represents Supreme alone. This is the second gift that nature bestows upon you when you intensely and sincerely walk the spiritual path. You feel closely connected to the Divine. At this point in time, you do not doubt the existence of the Divine. You know the divine exists, you have felt the divine warmth, the divine protection, and you also receive his guidance. The Divine speaks to you from all directions. You hear him alone in all the voices. You know He is near to you.

As the seeker progresses, he is rewarded with divine embrace, protection, and grace. Life becomes blissful. It is not that there are no pain, loss, or obstacles in a person’s life. However, he experiences that Divine is walking with him even in those moments. Happy or sad moments, a divine companion walks with a seeker all the time. Rarely, someone dares to march ahead.

The ultimate reward of the sacred journey: Nachiketa asks Yama “What happens when we go beyond?”. The spiritual journey is the most intense, painful, and the most rewarding journey one can ever undertake. The rarest of the rare who do not even stop after the second reward asks Divine for the absolute Knowledge. The Knowledge of Freedom from Bondage. He realizes that to experience the divine, he needs to have a separate identity from the Divine, he realizes he is tasting the sweetest nectar but what happens when we go beyond, our separate identity is the question he inquires, with a calm and detached mind, with divine grace and guidance, he surrenders to the divine to let him reveal the greatest secret, the secret of many to one and one to many. We can witness the greatest reward of attaining this knowledge in the form of Swamiji, such a seeker have not only seen the divine, rather he becomes the Divine himself.

Special Thanks to Divya Vanshikaji for inspiring me to share my thoughts on the story.

All Glories to Swamiji Alone 🌼🌼🌼

How to Motivate Yourself to Achieve Your Goals?
Sri Brahmachaithanya Pravachan-March.5