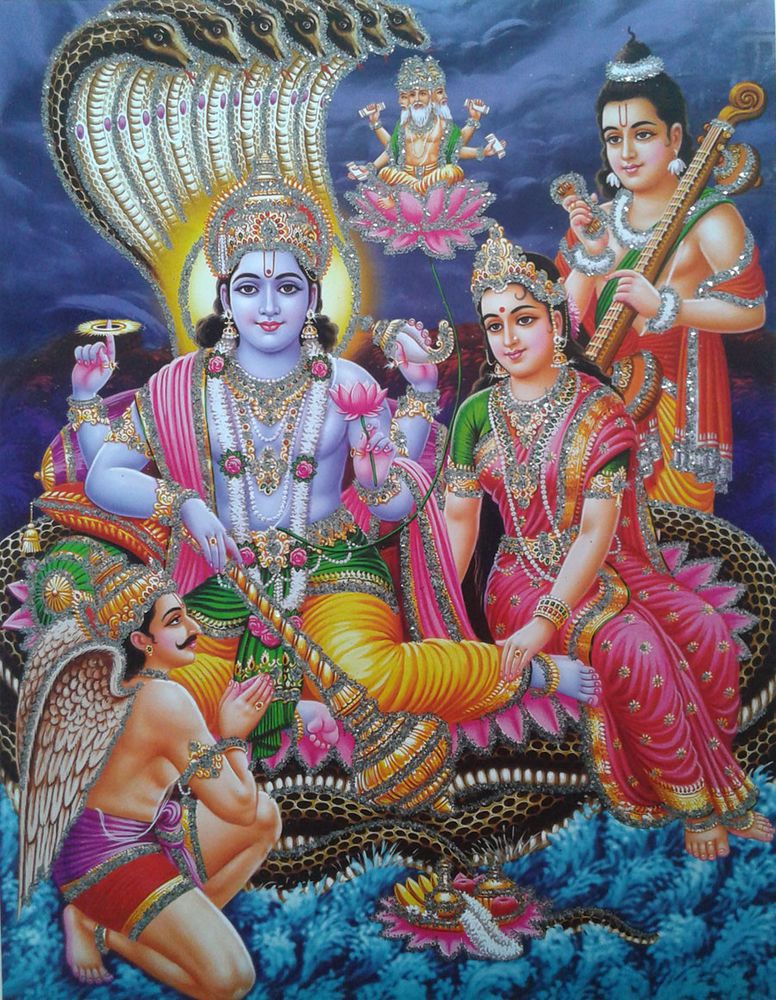 The Snake- The Bird Festival

Adi Shesha – king of Nagas, the Nagaraja and Garuda, king of birds, the Khageshwara.

There are 3 common points/links between them, though they are die hard enemies.

1. Both are brothers(step), sons of  Kashyapa Prajapati, from Kadru and Vinata, respectively. They are  uncomparable, mighty but became opposites/enemies. When Kadru cheated Vinata, Uchaishravas, horse tail story, where Vinata became slave to kadru, the enemity between brothers got triggered from then onwards for eternity and also snakes are food of Garuda.

2. Both carry Maha Vishnu. When it comes to duty, both are epitomes in their respective services to Maha Vishnu.

Adishesha is recumbent and coiled, on whom Maha Vishnu reclines in yoganidra, constantly to maintain the creation. Adi Shesha  acts like a bed/mattress, orthotic/water bed on the ksheera saagara, that even massages and aerates. Adi shesha  also supports our earth, Bhoodevi on his head. Not just earth, as Sankarshana, one of the vyuha avataras, Adi Shesha is holding the entire creation, and it is said his breath- synchronises with  shrishti/pralaya. His other avataras, that accompany Maha Vishnu are Sri Lakshmana and Sri Balarama. Sage Patanjali, one of his incarnations, he gave us Yoga Sutras. As Sri Ramanujacharya, and later Sri Manavala Muni, he kindled Vishnu bhakti and pioneered Sri Vishishtadvaita philosophy.

Garuda is everready in action-flightmode,  to board Maha Vishnu and just transport to the attested destination- HIS vahana/mount/ vehicle. In all Vishnu temples Garuda is erected in front of garbhagriha. Garuda’s  wings are abodes of Rig, Sama and Yajur vedas. Garuda preys nagas and also wears them as ornaments.

On this very day, the Nagas were rescued/protected  from being totally wiped off in Sarpa satra yaga, by  Asthika Mahamuni’s request to king Janamejaya to abort the sacrifice. To honor Adi Shesha and all Nagas, we celebrate Nagapanchami.

On this same day, Garuda got amrita from heaven to end slavery of his mother. He also willingly became vehicle and emblem of the flag/garuda dhwaja to Maha Vishnu on the very day. So Garuda panchami is also celebrated on eve of  greatness of Suparna.

Manasa Devi, a great shiva devotee, sis/o Vasuki, w/o Jaratkaru Mahamuni, mother of Asthika Mahamuni is revered for preserving the Naga species. Manasa devi –temple in Haridwar, uttarakhand, is a siddhipeeth. Other serpents, popular ones like Kalinga- Sri Krishna, Vasuki(sarpa king)  associated with Lord Shiva(ornaments) and amrutha manthan. Takshaka killed/bit Sri Parikshit Maharaj , Karkotaka bite/boon disguised the great king Nala. Sri Ganesh used snake as belt, and Sri Subramanya Swami– himself is worshipped in one form as Naga- Sri Kukke Subramanya Swamy, in Dakshina kannada, is the most powerful, significant temple, where Sri Subramanya,Vasuki and Adi Shesha are seen at 3 levels from above in that order, along with Garuda, standing opposite in the pillar is seen.

The list is vast/expansive, in almost all fields of life, name it, the Nagas and Garuda association is encountered. Their greatness is endless, infinite. We worship them to get rid of sarpa dosha, nagaprathishta done  for delayed marriages, child bearing, and ashlesha bali. In toto they are everywhere, omnipresent, from ant hill to kundalini , extending from netherlands- patala to all urdhva lokas.

During the theerthayathra trip to south, at Srirangam(first, DD), after Sri Ranganathar darshanam, we saw, in the 4th prakaram/compound,  there is biggest(in world) magnificent and beautifully colored wooden idol of Garuda. In addition, here we were fortunate to see Sri Ramanujacharya!!, young, who is slightly peach colored, ? idol, no himself, blessed we are for this darshanam. Also, we got lucky to see, Kal Garudan in Nachiyar kovil/temple (1/DD) near Kumbakonam. Significance is – it gets heavier, weight remains same but ??some maya , during cirambulation/parikrama and when taken out of temple, only to allow devi and devata to go ahead of him. Once achieved the statue gets lighter, needs less people to carry there on. At Kanchipuram, within a temple complex of 4DD’s, there is Sri Ulagalantha perumal, Thiru Ooragam- as ooragam/snake form. Actually, with HIS blessings we completed darshanams of all 15 DivyaDesams(DD) at Kanchipuram. At Tirupati, near Alipiri gigantic Garuda statue can be seen.

I always wonder/ponder, why Garuda has not taken any avatars to accompany Maha Vishnu in HIS /incarnations/avataras, like Adishesha did so. No avataras of Garuda ( but some say him as ??Sankarshana!).

p.s: The whole story of Garuda and Nagas is illustrated beautifully in ACK comic.