According to Srimad Bhagavatam Canto-7, Hiranyakashyapu’s young son, Prahallada have recently started his education at the Gurukula. So, the father asks his son, to share his thoughts on what is the best of knowledge he has learnt thus far. 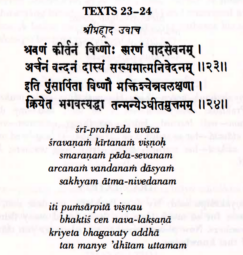 Upon this request, Prahallada explains Navdha Bhakti to his father as the best thing that he knows and he had learnt it from Sage Narada Maharishi, even when Prahallada was in his mother’s womb.

As part of his reply to his father’s request, in the above shloka, Prahallada explains the 9 types of Bhakti also known as Navdha Bhakti or devotion one can have towards Vishnu (Rama or Krishna also are avatars of Vishnu). 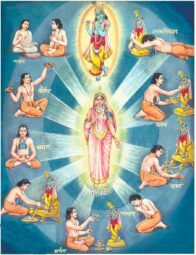 Story of Shabari and Navdha Bhakti in Ramayana
Draupadi-Satyabhama Samvada