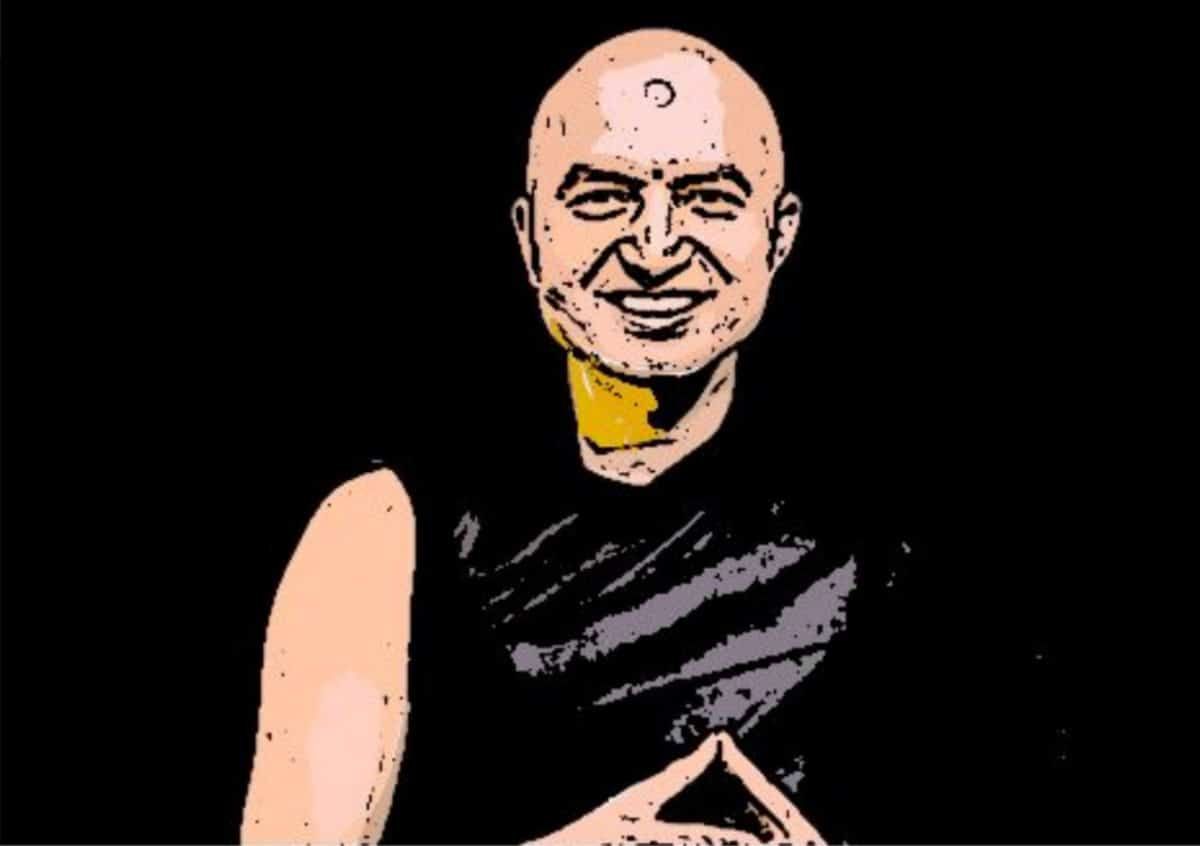 When it comes to Swamiji’s introduction, we are familiar with some known ones such as “A simple monk in a complex world.”, “Om Swami is a Himalayan monk, adept in meditation.”, “Monk.Author.Nobody”, “The monk who sold his Porsche.”, etc. By the way here are two from the good old days:

Apart from these, here I share with you two variations of Swamiji’s description from the Fan Club website.

Swamiji’s divine touch has healed many lives across the globe. Depressed, confused, lost and tired from the ways of life, people have come to him for help and none have returned empty handed.  I’ve seen among people and felt it within, the bliss that one experiences from his unconditional love and support. To me he is a siddha, a realized soul, full of divine love that transforms all those who come in contact.

Swamiji was initiated by a Naga saint followed by the highest initiation by a Tantra yogin later. He then spent a fair bit of time in intense solitude and secluded meditation in the deep Himalayan woods and caves. Swamiji now lives in the Himalayan foothills. He does not use his name he was given at the time of initiation. He prefers to just use Om Swami.

Swamiji does not go to towns to give discourses and does not accept any donations or material offerings. The only way he stays in touch with everyone around the world is through his writings and video discourses on his blog omswami.com.

The core of Swamiji’s message is that following a higher path is more important than following any guru or individual. It is only one’s own discovery of his truth that sets the seeker free. Everything else is conditioning. Rather than subscribing to any philosophy, one should work towards one’s own realization. True knowledge always comes from within.

He believes even a little application of practical knowledge is far more valuable than a ton of bookish knowledge. Demonstrating the state of samadhi, Swamiji can generate alpha, beta, delta waves in the brain at will. He can regulate his body heat, change blood pressure levels, shut down his heart beat at will, all of which he has demonstrated to doctors, neurologists and other medical professionals on multiple occasions.

Swamiji renounced all his material wealth in a jiffy. Prior to renunication, he did his MBA from University of Technology, Sydney and a Bachelors in Business Computing from University of Western Sydney. Swamiji served in executive roles for such corporations as General Motors, News Corporation, Deloitte and Touche, Barclays Bank among others. He founded and lead a multi-million dollar software company for seven years with offices in San Francisco, New York, Toronto, London, Sydney and India.

Today we often refer to him as the ‘The monk who gave away his Porsche’. He completely renounced his business interests to pursue a more spiritual life where helping and guiding as many people as possible is his sole interest in life.

Here are some interesting facts about Swamiji:
1. By the age of 12, he was a professional astrologer and was reciting vedic scriptures.
2. By 16, he had started a software company which he later sold.
3. At 21, he quit his corporate job paying him a whooping $250k to start his own software company.
4. By 23, he had more than trebled his income.
5. By 27, he was running a multi-million dollar operation with offices in five countries.
6. At 30, he renounced his business at its peak to pursue his spiritual journey.
7. He has always been a vegetarian and a teetotaler.
8. He is a rated chess player and a tournament badminton player.
9. He does not watch TV. In fact, he never even bought one.
10. He is an Australian national of Indian origin.

We love you Swami. Thank you for being part of our lives.

Swamiji’s divine touch has healed many lives across the globe. Depressed, confused, lost and tired from the ways of life, people have come to him for help and none have returned empty handed.  I’ve seen among people and felt it within, the bliss that one experiences from his unconditional love and support. To me he is a siddha, a realized soul, full of divine love that transforms all those who come in contact.

Om Swami is a mystic par excellence who lives in the Himalayan foothills. Swamiji was born in North India and he was trained in Vedic chanting and astrology by the time he was twelve years old. He received his tertiary education in Australia where he earned a Bachelors in Business from University of Western Sydney and an MBA from University of Technology Sydney. He served in a number of Fortune 500 companies as an executive and ran his own software business in five countries for seven years. Swamiji renounced his multi-million dollar business completely to pursue a full-time spiritual life and went to the Himalayas for intense meditation in silence and solitude. Om Swamiji was inititated into sannyasa by a Naga Saint in Kashi followed by a tantric intitiation by a tantra yogi in Kamakhya. He has demonstrated various yogic feats to a number of doctors and other people. He can shut down his heart-beat at will, change his body temperature, regulate his blood pressure besides exhibiting extraordinary stillness in his meditative posture. As a matter of principle, Swamiji does not accept any donations. “A monk need not be a burden on the society,” he says. We lovingly call him the Monk Who Sold His Porsche. Swamiji writes on his website on omswami.com.

We love you Swamiji. Thank you for being part of our lives.