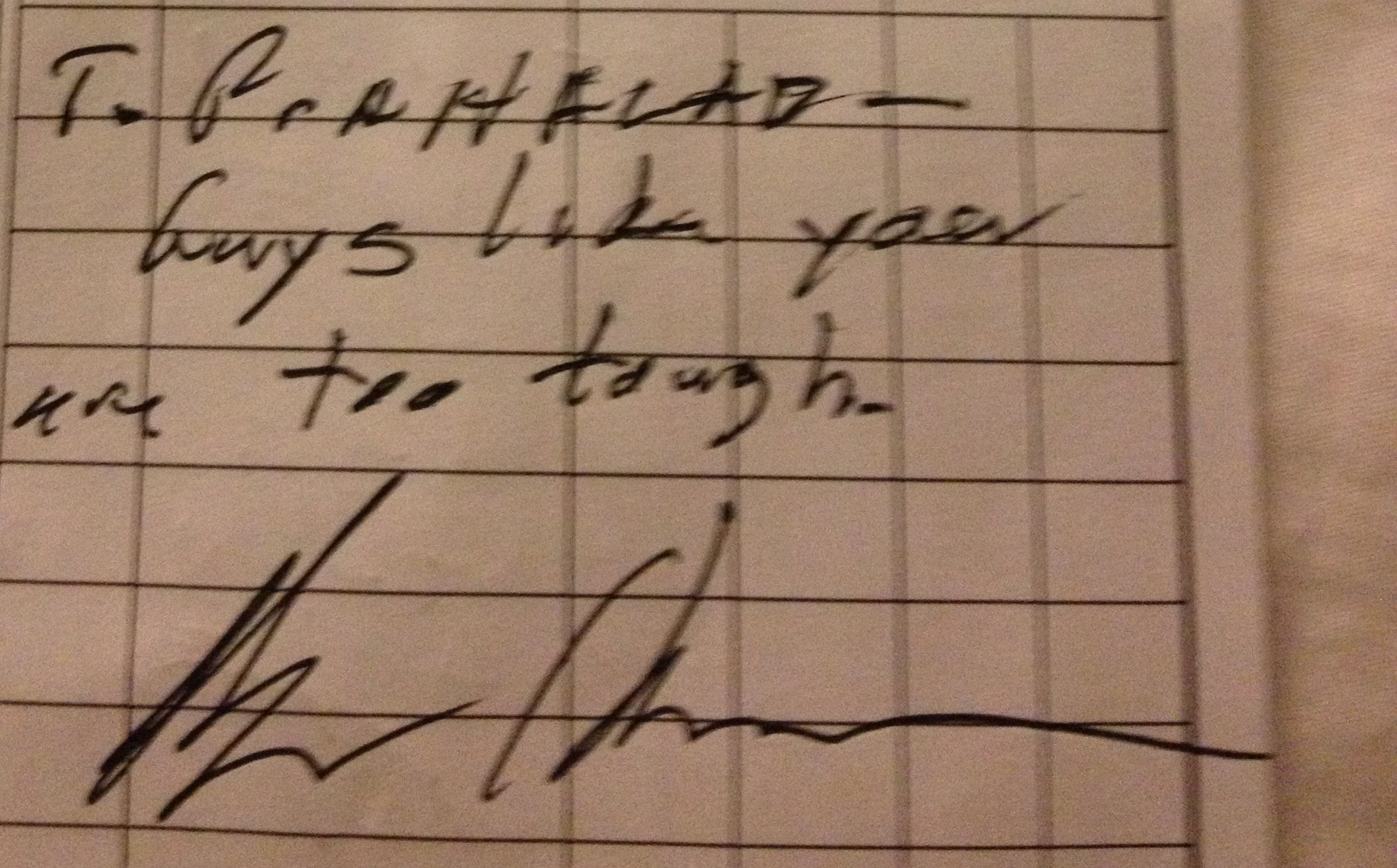 One Out of Three

A Tale of Three Autographs #TheWriteChoice

In April 2011, one of my coworkers gave me a travel mug as a parting gift, when I was moving back to India from the United States. A few days after I came to India, I filled up the travel mug with a beverage, and took it with me to an evening bridge game in Chennai. When the game got over, I came back, but my travel mug did not – I had promptly lost it, less than a few days after I received it. An innocent mistake, you’d be forgiven for thinking. In 2017, my dear wife packed lunch for me in my fancy lunch box, which I promptly lost in the back of an autorickshaw. If you hadn’t guessed by now, I had a penchant for losing stuff. None of this compares to losing something which you could call my prized possession. Twice, at that.

In the summer of 2005, I participated in the Summer North American Bridge Championship (NABC) held in Atlanta. I was in line to buy breakfast at McDonalds in the food court which was adjoining the hotel where the tournament was held. There were about 6 people ahead of me in the line. The person ahead of me was multiple world champion Bob Hamman, widely regarded as one of the greatest players to have played the game. Seizing the opportunity, I asked Hamman, “Could I have your autograph, please?” Now, this is not a usual request in the world of bridge. Autograph requests are not commonplace as they are in baseball or cricket. Hamman asked me for my name, and in a scorecard that I gave him, he wrote something that gave me goosebumps when I read it: “To Prahalad – You will be a World Champion one day. Bob Hamman”. You guessed it right dear reader – I proceeded to lose this invaluable memorabilia. I don’t remember when I lost it, but when all was said and done, the autograph and I had parted ways.

In the Summer of 2013, I traveled from India to participate in another NABC, held again in Atlanta. During the middle of the tournament, I spotted Hamman in the hallway, talking to someone else. Hoping to make amends for my 2005 snafu, I asked him again for his autograph. He asked me for my name again, and wrote the following words: “To Prahalad – Guys like you are too tough. Bob Hamman”. You may be pleased to hear, dear reader, I did not lose this – in fact, I saved it, got it framed, and I have it with me to this day – a major accomplishment – anyone who knows me well would attest to this! 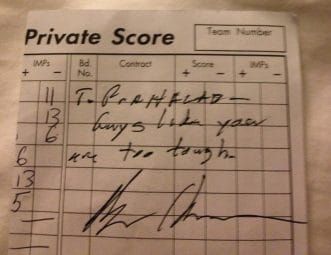 I got a chance to interact with Hamman again that tournament. I played against Hamman’s team on the last day of the NABC. I played in one table, Hamman was sitting in my seat at the other table, and we held the same cards (my partner and I would play against his teammates at one table, and my teammates would play against him and his partner at the other table, and we would be playing the same cards. The point is to see who can do better playing the same set of cards. This variant of bridge is considered to be one of the highest tests of skill, as it eliminates luck to a large extent). On one deal, Hamman and I took different decisions, his was the winning decision on that deal. At the end of the session, I asked Hamman for his reasoning. “It is very close – you did not make a mistake – I would have chosen your decision on another day”, he helpfully offered. That helped – in bridge, cause and effect are not obvious all the time – you could play well and lose on some days, play badly and gain on other days; the more accurately you play, the better your chances of winning in the long run. With this being the case, knowing when you have made a mistake is helpful to make corrective adjustments in the game, and Hamman’s input helped.

In the Fall of 2019, I traveled to San Francisco to play the NABC. On Day 3 of the NABC, I had a dream-come-true moment – I played two boards against Hamman. One one deal, I made a decision which did not work out well. After the round was over, I asked Hamman for his thoughts on my play. “Your play was reasonable, you didn’t have adequate clues to find the winning play”, Hamman offered. For reasons mentioned earlier, this was very helpful. When comparing results, I found out that Hamman’s teammate who was sitting in my seat did exactly what I did, giving some credence to my action. Greedy that I was, I wanted another autograph from Bob Hamman – and asked him. On the back of another scorecard, he wrote “Prahalad, guys like you are tough to beat. Bob Hamman”, along the lines of the message from the 2013 autograph. I guarded this carefully. Or so I thought. When I went back to the room, horrors of horrors, I had lost this scorecard and the autograph. NOOOOOOOOOOOOOOOOOOOO, I cried (hopefully not too loudly). I went back and scoured the playing area, but I couldn’t find it.

Oh well. One out of three autographs ain’t that bad. Or so I console myself.