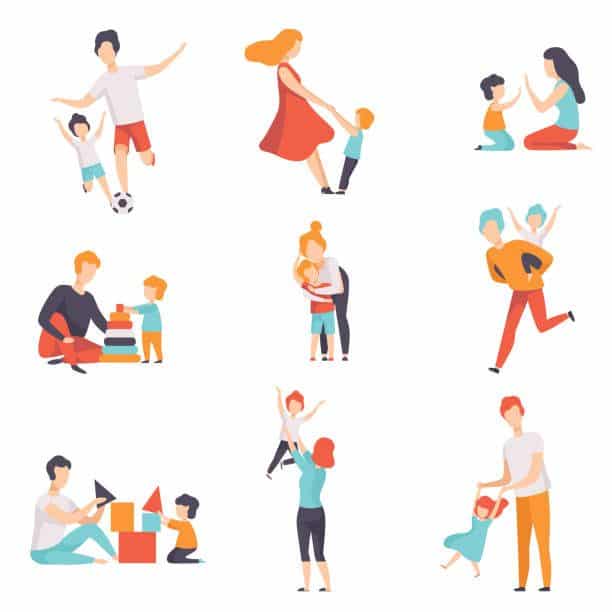 The children of tomorrow are built by the elders of today, patiently, one step at a time

“Hey! I am working here, why do you want to disturb me,” I asked my daughter in a frustrated tone.

“I want to sit on your lap and do like this (showing the action of typing).”

“Because I want to be like you,” she smiled.

So, this puts the entire responsibility on the people around to make sure they only act, talk and behave in a way that they can see in the mirror.

Here are some of my observations from parenting my daughter, Advaita. I will also try to provide some tips that I found useful.

Listen to them patiently

The most beautiful part of bringing up kids is listening to the stories they tell. The magnitude of imagination that they bring into conversation is mind-blowing. I make it a point to give an ear to almost all of the stories and suggestions that my daughter has.

Sometimes when I am in the middle of my work, I am not able to pay attention to her and eventually have to shoo her off, especially in the middle of a meeting. Whenever possible I not only listen to her but also interact with her to ask questions on what she has to share.

It also helps me in recognising what is being fed into her imagination. I make sure to filter out the sources in case I find something not going “right” in her head (remember, she is just a mirror).

“Daddy, I had a bad dream last night,” screamed Advaita from her bed and came running to me as she woke up in the morning. I asked her what was bad about her dream.

She told us that she saw a dream where she was left alone in a cab and we (her parents) went away. I soon realized the power of bad incidents and its impact on a child’s psychology. Few days ago, me and my wife had stepped out for 1 min to bring groceries from the basement while Advaita was sleeping. We thought we would be back before she wakes up. But to our surprise (Murphy’s law) Advaita had woke up within that 1 min, searched for us, realized we were not there, started crying and already red eyed and at peak of her crying notes. All in span on 60 secs. (Another thing I realized that day was 60 sec is a long duration). The first thing in the morning of being left in a house alone with parents not around had a very bad impact on her mind. Even now she occasionally tells us about a dream where she is either left alone in a cab or a train station or wherever her imagination takes her.

Listen to kids carefully, understand the pain points, address them. Try to unearth if there are any scars that need attention.

Be very careful of what you speak around them

If you ever wished for a device that could replicate your tone and intensity of your verbal communication then don’t go too far searching for it, you will find it in your kids. This device (read kids) basically picks up the average value of your tone and uses it as its datum for their tone of communication. I have observed this not only at my house but also at many others’. If you are loud at home, so will be your kids and other way around. Of course, there will be occasional screaming of kids of even to silent parents, but more or less their decibels would be at lower end. The reverse I think is not true though. If the members of your family speak as if there are only deaf people around then your kids will make sure you grow deaf one day.

Raju Pandit was once arguing with his wife when finally, she gave up and yelled out “Tum rehne do, tumse kabhi koi kaam nai ho paega” (Leave it, you are good for nothing).

Later in the day when Raju was struggling to fix his daughter’s craft work, she eventually gave up and said “Papa rehne do, tum se kabhi koi kaam nai ho paega”. (Leave it dad, you are good for nothing).

Kids are the physical manifestation of the “copy-paste” command. So be very careful with what you speak. Else be ready for your neighbors to know what you think about them.

The language that you speak is a good measure of your mindfulness quotient. The more mindful you are, the more measured you will be in what you speak, and kids will only pick that.

I could easily observe that the older I grew, the more difficult it became to take up a new habits. The resistance to learn something new increases exponentially with age. With that equation, the easiest time to learn something is childhood. In the Pre-Covid19 age, I used to get up at 6 am as I had to get the daily chores done and rush to office. Advaita picked up this habit ever since she was two years old. The biological clock was set so nicely for her that we never had to wake her up.

Post Covid19 strict Lockdown scenario, we would find it difficult to manage her and office at the same time. So, if she would continue having this habit of getting up early in the morning, it would clearly interfere with our work. Hence, we decided to tamper with the hardwired code of kids i.e., easy habit building. For two weeks we made it a point to take her to sleep late and we would not get up early in the morning. This meant she had to be on bed even if she got up early. Slowly she got into a habit of getting up after 9 30 a.m.

That’s actually very sad strategy that we had to adopt, but it is what it is. This pandemic has shown us our own good bad and ugly side.

Another forced mistake that we had to indulge her in was giving her access to mobile phone. I had promised myself that I will not make my kid a slave to digital media like mobile or TV. But with both of us working and no one to take care of her at home, I had to finally walk the forbidden path, handing over cartoon on mobile. But there is some hope.

Few hacks for quality and consistency

For initial few days, I built the scarcity mindset in her. I used to never give her mobile beyond 20 mins, where as she wanted to watch a “bit” more. I slowly used to give her more time as a “reward”. By this way she had built an appreciation of watching for 45 mins and key resistance of 1 hour. In 2-3 weeks’, time, what started happening was that even if I give her my mobile unmonitored, she used to come back to me in 1 hour or maximum 75 mins saying that she does not want it anymore. (I know kids who can binge watch for 3 hours or more). Although it meant we had to manage her with something else but the addiction did not become alarming.

Another useful hack is of quality and consistency. By using platform like YouTube kids you make sure that they are exposed only to safe content. Also choosing cartoon shows that help building imagination and creativity of kids is also important.

My favorite is “Peppa pig”. I cannot tell you how much influence this one show has had on my daughter in last 1 year. And I only have positives that I can look at. Kids being keen observers pick up whatever they are exposed to, and I have no complaints on what she has learnt from there. This is the best I could do in the given situation, and 1 year down the line I am actually not complaining the way she has developed. The only downside is she address me as “daddy pig” (and her mother mummy pig, then there is grandama pig, grandpa pig and so on. Imagination! can’t help it).

Monitor kids intermittently, provide good quality content, build consistency. Its not that difficult as it may look

Appreciate and nurture their creativity

I always make it a point to spend some time with Advaita when here creative juices are at its peak. (off late that has been a considerate amount of time). Watching me do my office work hands on in front of her, she has been more than eager to get hands dirty herself.

I have a fascination for whiteboard and marker. I spend a good amount of time brainstorming alone and writing my stuff. It has rubbed on to her over the past few months. So much so that now whenever I have the marker in my hand, I have Advaita for the company. I have now reserved a “creativity corner” for both of us. Every morning, while I am doing my routine of making some points or sketches on white board, she is there, somewhere near my waist height writing her own notes and making her own sketches.

Provide them a playground to express themselves, make sure you walk the talk, they will follow you suit.

I think this article has gone longer than expected. I will continue into part 2 sometime later with few other learnings I have to share.

Wishing all parents mindful parenting. If you are past that phase, then please influence others’ kids in right manner.


Login with Email
No Account? Create One
My Truth – 5: Transgendered
How to Drink Water as per Ayurveda