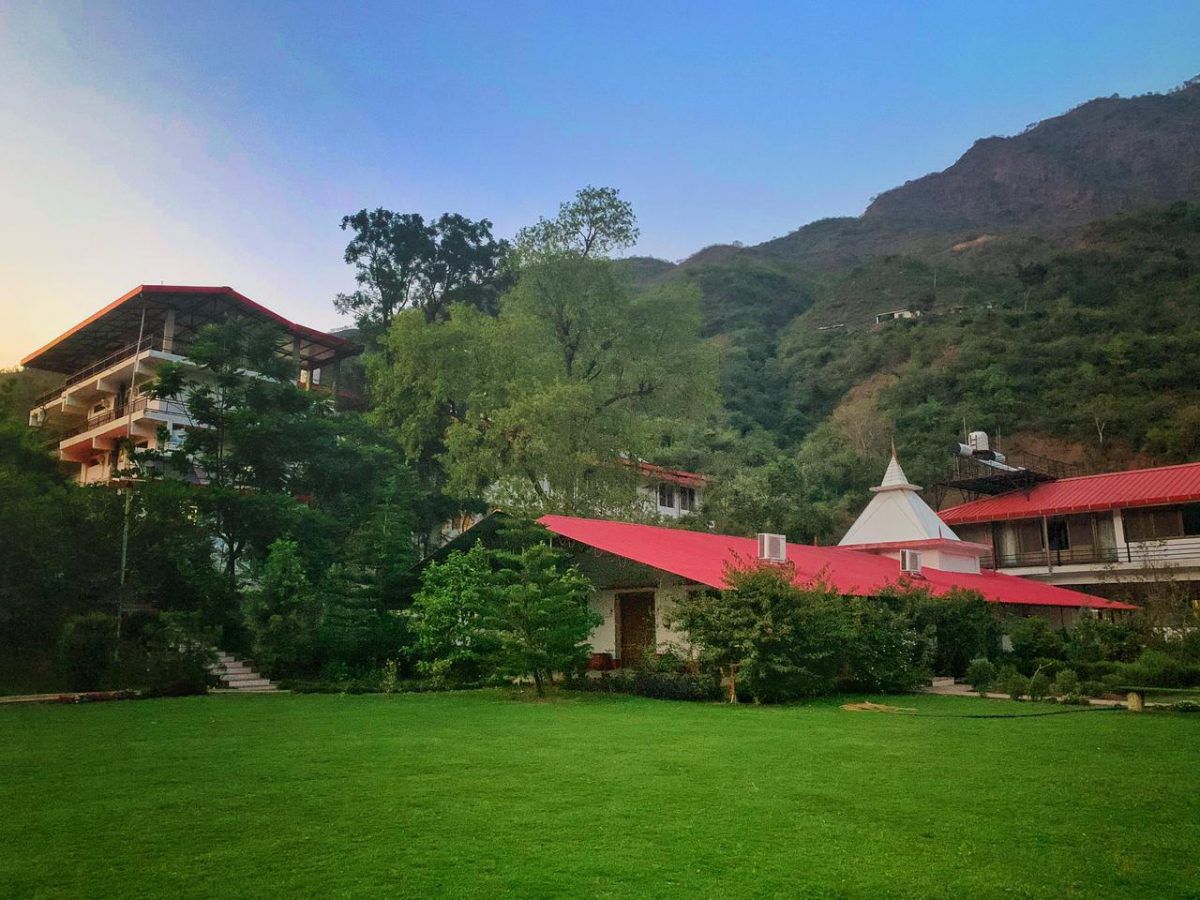 Part 1: When He Calls

Making it to the ashram against all odds

A couple of days back, I had been sitting peacefully in our meditation room, basking in the divine energy of Swamiji, contentedly sitting at His feet. Before your mind wanders in thought, yes, we have Swamiji’s Charan Paduka at our home blessed by He himself. I didn’t even need any words to convey the gratitude brimming in my heart, for He knew it all and always seems to know. As I sat, I marvelled at the beauty and bliss that entered my life ever since we encountered His divinity. I mean, who doesn’t? 🌺

It had all started in 2017, four years back from now. My husband, Dr Alok, is a frequent traveler and so, buying books at airport is one of his favourite things to do. He would always come home with at least half a dozen books (Since COVID, the only thing that has changed is that the same number of books now come through Amazon). So, naturally, as fate would have it, during one such travel of his, Swamiji’s memoir found its way to Alok’s hands, and so, that time around, I was surprised to see that he came home with just one book- If Truth Be Told, instead of his usual haul of three or six, as time would allow.

Soon, it was obvious that it was one of his most incredible possessions, or rather, he was possessed by it. In the day, he would be flipping pages while in his clinic before another patient jumped into the seat, and at night I’d sleep with the night lamp open for he would be reading still. This wasn’t because his speed is slow, which would be plain lying, he goes through books like sandwiches, one a day. Although he had always been a voracious reader, I’d never found him so engrossed in anything. He was completely enraptured. I was quite puzzled and intrigued to see him like that, and somehow managed (managed is just about the right word) to get to read it, as Alok was never ready to part with it. (Since that day, we’ve made peace with an agreement of buying one copy for each of us and plenty others to gift. I call truce!) I too was absolutely invested in the book and its author, and my husband and I would engage in frequent discussions about the same, with our kids desperately trying to figure out which book had us so invested. 🤔

It left such a huge impact on us, that soon we found ourselves clicking on ‘Add to cart’ on Amazon, which happened to be the beautiful book written by Sadhvi Vrinda Om and Swam Vidyananda Om, As We Know Him. That book is like none other, describing Swamiji’s incidents and his mesmerising self in vivid, amazing detail, making the reader almost one with the book.

(It only furthered our enthusiasm to know more about this great soul in the Himalayas. Who was he? Where was he? How do we reach him? Or perhaps, the latter was a wrong question. Now, I’m just grateful that he found us and took us under His shelter. 😊)

After a bit of looking up and googling and searching on the internet, we finally found out the whereabouts of Swamiji, and did our bookings for a day for Sri Hari’s consecration annual celebration event held each year in April. As we were not really devotees at that time, not to mention unsure of such a long journey to Ashram, it being nine hours by road from Haridwar-the site of our dwelling, we decided to do a break journey which would involve a stay on the 30th and 31st at Kasauli, followed by the Ashram on 1st April, which also happens to be our daughter Bhavita’s birthday. (“April fool!” 🤡 My younger daughter cries.) So, all was set. We were incredibly excited and a steady reverse countdown towards our well mapped out visit began, as the dates inched further and further. We couldn’t wait.

However, we had not taken into consideration the fact that one can lose their way in the mapped territory as well, and so, life doesn’t always go according to plan. It is like a petulant child, refusing to do as told. Instead, it leaves you gaping, and so does He.

Our bags had started being zipped up, as we were to leave on the 30th and the excitement was palpable in the air, apart from the fact that we were nearly ready. But then came a crack in the plan that we hadn’t expected at all.

It was on the 28th of March that my father in law suffered a massive heart attack. Being a doctor, I’d heard it happening to other’s loved ones and those dear to them, but I hadn’t ever imagined it to happen to someone so dear to us. It left us shocked and numb.

We were devastated. Papa is one of the most loving and adorable persons one can ever know as he is an amazing, doting grandfather, the perfect father, a good husband, a popular uncle and so much more. Everyone was stunned, including my daughters, who were only twelve and ten at the time.

He was rushed to the hospital where he underwent surgery, angioplasty. The tension that we all felt as we remembered his heart throbbing in there, unable to handle it all, is something that makes us all solemn to this day. I still remember consoling my daughters, we told them it was a minor health issue and he was completely fine. Yet, all the adults, staying strong for their kids, too felt like kids themselves, as we sat in silence, tearing apart from the inside.

By Divine grace, his life was saved. It was a moment that one can never forget. The doctors were incredibly relieved that we’d reached just in time for his life to be saved. It was pure, unadulterated grace. His grace & grace alone. 🙏🏻

In Haridwar, we have quite a big, extended family. Papa has 6 brothers and 2 sisters, all living nearby. Everyone rushed to our place, anxious to know all about what had happened. On the 29th of March, he was shifted to CCU, where we could visit him. We all sighed in relief.

The moment is still clear to me as if it happened yesterday. The minute we went to see him, he uttered words I will forever remember, as I have done so far.

“Bacchon, ab mai bilkul think hun aur kal aap log majese jana aur Swamiji se milke aana (Children, I’m completely alright now, you all go tomorrow and meet Swamiji).” I was stunned. What a gem of a person he is, I thought, and my heart swelled in gratitude and respect for my father-in-law. He was feeling guilty that our program got cancelled because of him. We were moved to tears. How could one not be? Though we were disappointed to not go ahead with our visit to the Ashram, we were happier to be with him, and to know his kind heart was alright. His words had affected me deeply. Was it Swamiji speaking through him? Our faith says so. And if it is the same for you, yours does, too.

The very next day, he was discharged and so, relieved, we came home. He was still quite persistent that we depart for our trip, but we were in a total fix. Our relatives were there, my mother-in-law was extremely stressed and added to it all, there were endless phone calls to enquire about his health. If hypothetically, I thought, we were to go, how could we just go leaving him? There were whispers of disapproval about our scheduled visit everywhere. Some relatives were very vocal saying how could we go leaving him just a day after a heart attack. But amongst everything happening around us, our desire to meet Swamiji was there all the time, growing stronger and stronger, like a Banyan tree in the hot Summers of July. Alok and I were not ready to accept that after so much planning, and so near to the date for a journey such as this one, we were to let it go.

As are the ways of destiny, things started happening magically, leaving little room for doubt that He was looking out for us. When divine calls, after all, who can stop you? My sister-in-law came for our rescue as if sent by Sri Hari (I’m pretty sure she was.) and decided to come over so we could go, and she’d look after him.

After much thought and discussion, came the decision. Alok decided that since papa was out of danger, we’d cut down a day of our Kasauli visit and just head to the Ashram.

Early morning on the 31st , we began the journey which was to change our lives forever. As Medha said beautifully in one of her editorials, Nothing changed on the surface, but nothing remained the same.

I am extremely grateful to the members of our os.me family for encouraging everyone to become a writer. Each one of you is truly inspiring and motivating beyond words.

Last but not least a very, very special thanks to my darling Hemanya ❤️ who is the reason I have written this post and she also happens to be my personal editor.

129 comments on this post. Please login to view member comments and participate in the discussion.