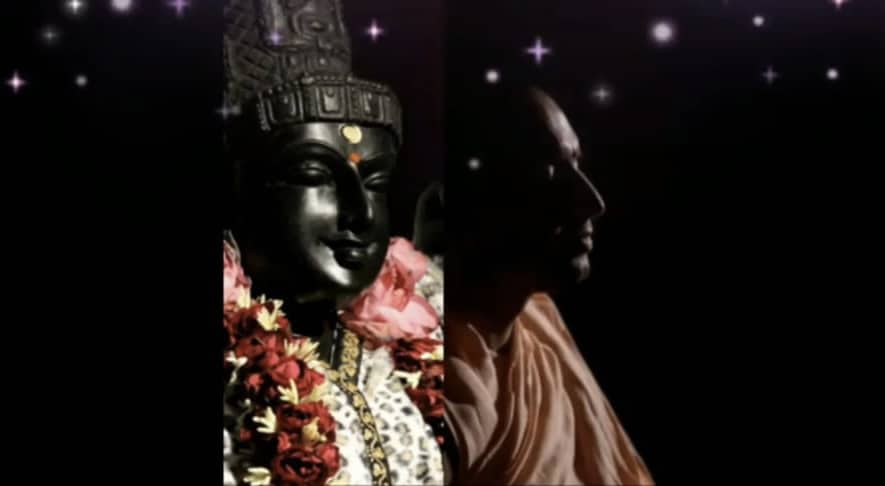 Part 3: When He Calls

Encounter with the Divine.

And so, at last we were home 🏠 . The kids rejoiced to be finally out of the car after being fried for a couple of hours as they showcased their cheerfulness by running across His lands.

Vikas parked the vehicle right in front of the office and then guided us to go there for check  in. We hurried to the office eagerly, only to find it closed. 😑 Slightly annoyed and perturbed to be greeted by something so unexpected after such a long journey, we looked around if we could find someone to enquire about the proceedings, but not a soul was around. 😒

Imagine- travelling with utter uncertainty, exhaustion and difficulty, we found ourselves with no one to receive us. Such is the nature of the human mind- absolute elation minutes ago, yet despair was already finding its way in. 😔

Vikas was the one who suggested us to go to the kitchen area and ask someone where everyone had vanished. 🤔  Fortunately, someone from the ashram kitchen staff told us that since it was Sri Hari’s consecration annual celebration, the Bhagwat puran was going on in the temple and everyone was sitting there and that’s why check-in would take place either during lunch or after it and  we were to wait. Back to our happy-happy moods, we asked him about handing over of the crate of apples that we’d brought, and were further surprised to know that he told us to keep them opposite the locked office, out in the open, just like that. Back home, we never keep anything in front of our house just like that because we never find it after a while 😇 but this was the Divine abode…the most secure and the safest place on the planet. My daughters too soon realised the same and they roamed  around  the Ashram campus for hours without anyone accompanying them. That’s also one of the reasons, they are forever eager to go to the Ashram. (Literally free 🦅) 😄

Vikas helped us unload the crate of apples and we thanked him profusely for getting us there safely and also for all those amazing stories about Swamiji that made our journey unforgettable, as is obvious because of the article I’m writing right now. We bade him goodbye 👋 and then rushed towards the temple.

The temple doors were wide open, and we barged in like children late for a class. Somehow, we managed to find some  empty spaces amongst the gathered crowd and settled there.

In our haste, we completely missed the wonder of wonders sitting right in front of us for a minute or so.  The least expected had happened, although it wasn’t even mentioned in the day’s programme.

…Swamiji was there. Sitting right there, in all His glory, in front of us.
Oh my, my, my… How could someone be so radiant, beautiful and mesmerising all at once? We were very pleasantly shocked with that unexpected bit of Grace. Who wouldn’t be?

We were sitting quiet  at the back, but Alok was grinning like a little child , hopping and moving closer further closer to Swamiji and was as  happy as he could be 😃. As I was sitting with the kids, I found it awkward to keep up with him and so I sat at the right corner of the temple, staring at Him, entranced by His radiant form. 🙇🏻‍♀️

All four of us- we kept gazing upon Him lovingly, we gazed on and on and simply could not tear our eyes away! Swamiji’s asana (seat) is on the left side of Sri Hari and on the right side where his beautiful piano is kept, Vyas ji’s asana was arranged.   Vyas ji was reciting Bhagwan’s glories in a melodious voice, and everyone was lost in the bliss of the Lord’s stories. Swamiji was looking at Vyas ji, listening to him and in every so between, He’d smile beautifully.

It was indeed a sight to behold. I remember Bhavita whispering in my ear, “Mumma, Swamiji kitne chamak rahe hain?” (Swamiji is literally shining) and it  was more than true. Seeing Him in pictures and videos is indeed one thing, but visualizing Him in person- it is altogether a different story.

Little did we know that His morning session would soon end, in spite of days of waiting for His sweet presence in our lives. We had just encountered the Divine and He was already leaving. Our hearts felt absolute pangs of separation, and a tugging sadness at our hearts to see Him go, which we would feel in all future events, too. We still do.

Everyone who has visited the Ashram or attended any of Swamiji’s retreats would be well acquainted and familiar with this eerie emotion, for when He enters the temple, everyone smiles joyously, yet one experiences an emptiness and sadness like none other when He leaves.

(By the way, this was the very first and the last time when we entered temple after His entry, and also the only time we noticed that the temple door was ajar. Otherwise, the door is always latched after His entry. So was Divine expecting us? Of course! That’s why the door was open. Anyway, that’s what we love to think!) 🙃

After Swamiji left, I suddenly realised that in all that awe  and excitement, we had not even paid our Pranams to Sri Hari. Oh! I felt a slight tinge of guilt. I was sitting on the right side, from where Sri Hari is hardly visible, so I got up and moved towards the center only to experience another yet another wonder as His dark, mesmerising self appeared before me. Bhagwan’s majestically beautiful form took my breath away. “Sri Hari’s idol has a striking resemblance to Swamiji,” I remember muttering. It was only after another visit to the Ashram did I realise that the Idol in stone and the Idol in flesh are no different. 🌻🙏🏻

After that Divine darshan of His, sublime happinesses floating in our hearts, we proceeded to have lunch. In those days, the construction of the dining hall had not begun, and so the area assigned for dining ,  opposite to kitchen  just had a boundary and seating arrangement on the floor (on dari , mats). Even the aura of the dining area was Divine, and there were villagers too, having come to participate in Bhagwan’s birthday celebration. Chanting Sri Hari’s name, we contentedly ate  our prasadam.

And there, chewing on a Puri, we found Rajeev Mittal, a whole-soul caretaker of the Ashram. 🙂  Rajeev ji, as we call him, renounced his flourishing career as a Charted Accountant and shifted to the Ashram for good to be in His Sewa. He and his better half, Karuna bhabhi, are devotees like none other. They have devoted their lives to the cause of the Ashram day in and day out. His daughter, Sushree Swadhaji is one of the disciples of Swamiji.  Swamiji is very fond of him and sometimes lovingly jokes, “Rajeev ji ka bas chale to office me hi so jaye.” “If he had a choice, Rajeev ji would probably sleep in the office itself.” Seeing his busyness at the ashram, we actually believe he would!

Those days, there was no specific office staff as there is now, and Rajeev ji looked after the check in and check out of the devotees himself, and during events, a lovely devotee- Sujata Om from Delhi,  helped running the office. After  checking in we girls were alloted the dormitory above the office while Alok was to stay in the male dormitory.  The dormitory we stayed  in back then,  is now the ‘Silai kendra’ of the ashram, that is, the stiching centre for women from the nearby villages. It’s one of the many charitable activities run by the Ashram for empowering women and I am in awe of how well kept and organised it is.

Being slightly tolled by the hill ride and a day of travel, we napped away until four PM, after which at four-thirty, there was the usual Lalita Sahasranama chant in the temple. It was  1st April, Ekadashi, an auspicious day and also my elder one’s birthday,  so we  had booked our names for the Abhishekam that was to be held in the evening at 4.30pm. During those days, due to the considerably less number of devotees, we were allowed to sit inside the steel rails right outside the Garbhagriha, along with the other devotees who had booked for the Abhishekam. I remember the sublime experience of sitting in His divine presence, as I heard Swami Parmananda reciting the Devi’s beautiful names and the temple was filled with an unearthly energy in those divine words. I marvelled at the fact and still do, as to how my daughters got such amazing grace so early in their lives. Alok and I smiled  throughout the Abhishekam, unable to take  our eyes off the lord’s glorious form. 🙏🏻🙏🏻 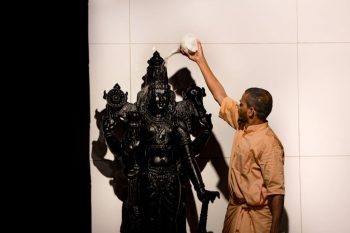 A picture of Sri Hari’s Abhishekam.

As it came to an end at about 5:15 PM, we kept our front seats saved as He was to arrive soon within a span of only 45  minutes. A sweet and eager silence adorned the temple as our gaze shifted alternatively between the clock and the door, and soon our heartbeats matched His footsteps as He  walked briskly towards the temple, with Swami Vidyananda and Swami Parmananda slightly huffing as they tried to keep up with Him.

And soon, our eyes followed Him to the door, where His tall form appeared and He removed his black shoes and slipped His pink, lotus feet into the padukas. I watched wide-eyed, as He walked ever so softly and slowly on the carpet so each devotee could have His darshan, accepting pranams all the while. Everyone in the temple was trying to partake of that Divine sight, and how could one blame them for being so enraptured as they stared away? 🙇🏻‍♀️ 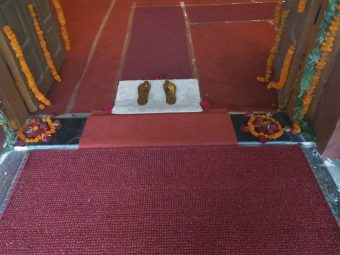 Myriad and mysterious are the ways of Divine to bless His devotees, and we were just one of those to receive it in abundance.

A/N: My immense gratitude to each and everyone of you out there for giving me so much love for my childish musings, and of course Hemanya and Alok, without whose help this post would not have been possible. Also, I wanted to drop a quick note- There’s an excessive amount of work piled up at the hospital, and won’t be able to post for another two weeks or so. I hope you understand, and I’ll miss you all! Thank you once again. Jai Sri Hari!

Doctor by profession, seeker by nature,forever on the journey of self purification.

73 comments on this post. Please login to view member comments and participate in the discussion.


Login with Email
No Account? Create One
A Durva with a Yellow Tinge
Kab Tak