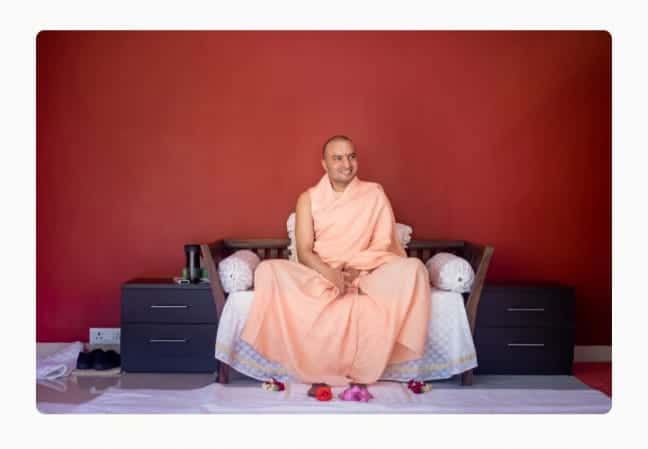 Part:3 Finally, My Swami Called Me to His Abode.

I offer my obeisance in the Lotus Feet of Guru Maharaj.

Let me tell you something. I’m neither a sadhaka nor a bhakta, I’m the most impure person I have ever known, I don’t know about other but I’m quite sure about myself… Whatever I’m going share it’s my personal experience, I’ll tell you as it is, without adding any fiction.

I already shared what happened till the end of discourse in my last post.

I’ll call her Maa, the one who was sitting next to me during discourse. Maa told me that as soon as discourse ends you should rush towards meeting room. As soon as aarti ended and doors opened I rushed towards meeting room but wait, Swami Ji will also come outside. With crossed legs I sat down to the left of main door near Swami Ji’s Charan Paduka. Guru Maharaj came and he was greeting everyone, when he was wearing his Paduka,

to which he replied: Narayani! Narayani!

Raghu Swani Ji came outside with Aarti in his hands, in great hurry I rushed towards waiting area outside the meeting room. Our group was the first one. As soon as everyone came, Vedananand Swami called our group.

Oh My God! Swami Ji, you look so different (I was talking to him in my mind). “Ek Chand Aakash me poora hote huye bhi Aaj adhura lag raha mere Swami ke Aage.” His round face…. No words….

Maybe I committed some apradha but as soon as we entered inside the meeting room, I sat very close to Swami Ji, left charan was very close, don’t know what happened inside, I touched his lotus feet 😭😭😭😭😭😭😭. Swami Ji and Vedananda Swami didn’t refused me to do so.

(Trust me, I have never heard such sweet, polite words…. Swami Ji was not asking but he was healing our inner self by saying this.)

To which I replied, Swami Ji!

It was so difficult to utter a single word in front of him, I was trembling….

I told him something to which he said:

In February 2021, I had a dream, a saint came in that dream, very old, his bones was visible but radiant face, he told me something. It was a kind of instruction but for that I need initiation from a Saint, I prayed to Maa to give me some indication, to show me some path… But till 18th March 2022 she didn’t replied… On 18th March 2022, Swami Ji blessed me with the same…. Everything was quite clear now…..

I know its not a big thing for many but for me it is an experience which I’m going to remember forever…..

Wait for next part…. (Something beautiful happened when I came out from the meeting room.)