Life's lessons taught by a bird 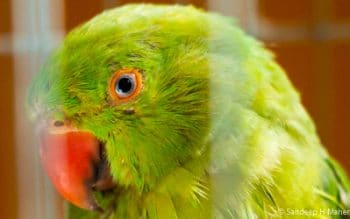 During an evening walk, I found her. She was despairingly fighting off this large dark marauder. The bystanders (myself and a few others) watched horrified from the other side of the black rusty door. There seemed little hope of her surviving the attack. A young man propelled by his conscience jumped in to save the young parrot from the crow. The crow was shooed away, and the task to catch hold of the frightened bird was easily accomplished.

The young man asked “Sir, can you please take care of the parrot?”. I was unprepared to say no. I never had a pet before. I had zero inclination. Unhesitatingly I took my red handkerchief out and the bird changed hands. As I walked back home, she cried and trembled, made desperate attempts to fly. I held her close, uttering words that meant nothing to the young one.

My daughter christened the weanling ‘Pingu’. I added ‘Maharaj’ to make my own selfish contribution (we knew much later that it was a female).

Pingu’s life in a home thus began, first in an Amazon box with crude screwdriver-drilled holes and then in a fancier steel cage. Her diet transitioned from fruit juices, crushed rice to a fuller vet-suggested one comprising vegetables, seeds, nuts, beans, and fruits. Ah, she ate like a queen biting and tearing into food uncaring of etiquette and mess. Within days, her cautious mood gave way to brawny confidence as she grew in size and gait, unfearing to peck and squeak. My existence alongside yours is of equals, she seemed to say.

We frequently googled content to make her happy and healthy. Arguments filled my house over her diet, behaviour, and her fickle mood. Every day I bathed her, cleaned her cage, and plotted her menu as a chef would for an eminent dignitary. We watched over her mannerisms, poop colour, sleep schedule, feathers shed, and her increasing length of flight within the room when we set her free.

Her place in the family began to get consolidated as I worried she might outlive me.

Then realisation struck. Maybe we were just deluding ourselves too long into pretending everything was good.

Pingu would be vocal with us and more with the parrots outside, calling out in passing as they do. There would be lengthy to and fro sometimes and we would be wonderstruck.

Her long feathers outgrew the boundaries of its confined home, her loud squeaks, assertive pecks, and display of anger when enticed back into the cage every evening grew in prominence. Her frustration became grossly evident. The voice inside us became loud and clear. It was time.

I took Pingu to the forest department office. The forest officers and NGO folks released Pingu after a health check confirmed her readiness (weight, strength, sight, flight) to fly back into the wild. They set her free in an area with fewer predators to improve her chances of survival.

It was a fulfilling experience to take care of the young bird, nurture and give it protection and love. The three months with her were memorable and heartwarming.

It feels even better now to know she is free, with her own flock, commanding her space on trees, in the vast sky. Surely somewhere she must be strutting around, domineering, bonding with her mate, mothering around…

No, the story of Pingu does not end here.

My conscience speaks. Questions, more than answers confront me.

We placed Pingu on a golden pedestal while she was in prison. We thought she was family while she lived in solitary confinement. Her well-fed body outgrew the cage while her soul yearned to fly. The lessons that emerge are many. Why do we keep people confined in our spaces, outside of theirs? Why do we rein in their freedom of choice? For example, is your loved one cooking at home but wanting to be a chef in a downtown restaurant? Is your child wanting to be an astronaut while you need her to be an engineer? Why do we trample people’s right to self-determination and impede their journey? Why do their voices sound like Pingu’s brattish squeaks that we chose to ignore? Why does it always take a rebellion (like Pingu did in her own way) to become free?

The words of Nelson Mandela’s toll within, “To be free is not merely to cast off one’s chains, but to live in a way that respects and enhances the freedom of others.”