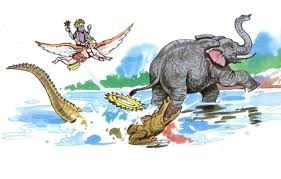 What I observed in past 7 years, I'm sharing with you.

I’m following all the niyams given to me by my Gurudev, but still there is some uneasiness in my heart that why why why? Why all these vikars are still surrounding me. I’m doing my Guru niyam properly listening to satsang not eating tamsik food, not sitting in bad company, still I’m surrounded by these vikars. I have a question for myself is my Guru’s words are false. I used to listen satsang everyday, and I’ll suggest every sadhak to listen to satsang and read good scriptures. First I thought this body’s creation is by these vikars so that’s why I’m surrounded by them. This thought of mine is completely wrong. After few days a thought came in my mind by Gurudev’s grace. The thought was: “I’m lacking in accepting the Supreme Power”. Supreme Power is one whether you say Hari, Shiva or Bhawani, they all are same, for me the supreme one is Shri Yugal Sarkar Priya Pritam.

After saying there is lack in accepting them. The question strikes the mind is what I have to accept?

Let me clear this we have to accept that we are the ansh of Supreme and we are supreme too. So as we are supreme then how these vikars will exist. They exist only when we believe in their entity. I used to believe vikars are in me then they are surrounding me, but when I accepted that Supreme Power is mine then these vikars got vanish completely.

I hope you all know about the story of Gaja(Elephant) and Graha(Crocodile). In brief I’m explaining, Gaja was an elephant who believes that he is the only supreme and powerful. He walks in the forest and teases other animals, he was accepting he is elephant and unknowingly he was accepting the vikars. One day when he was going to Sarovar(pond), there something good or bad happened. In the sarovar there was Graha a crocodile. When Gaja entered to the Sarovar the Graha gripped the Gaja’s leg under his spiked teeth. That moment the Gaja felt that his end is near so he felt helpless that time. He realised I’m not the Supreme, the Supreme one is only Shri Hari. He called Shri Hari beacsuse he realized Shri Hari is the only Savior. He accepted Hari is mine. The moment he accepts Shri Hari, Shri Hari came and cuts the Graha with his Sudarshan Chakra and releases Gaja from the grip of Graha.

What this story tells?

This story tells us simply that we are the Gaja and we are the Graha. When we accept vikars are inside us then it is the situation we are gripping our leg under the spiked teeth of Graha. The moment when we accept Shri Hari is our own then this is the situation when Hari releases us from the grip of Graha. That’s how the Power of Acceptance works.

Again I’m saying that I’m sharing not because I want your attention, I’m sharing only because I feel every sadhak who is walking on the path of spirituality often feels the same situations.
All these thoughts came in my mind just by the grace of Shri Gurudev.
Please forgive me if I hurt someone feelings.


Login with Email
No Account? Create One
“Paradise is Open to All Grateful Hearts”
The Right Opportunity at the Right Time