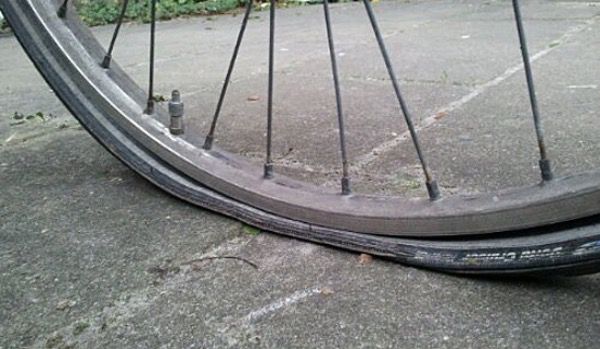 The tendency to carry on, when the whole world contrives to stop you is called persistence. Sharing my story on persistence.

When we think of the stock market, the image we have is of ‘stock trading floor’ and how astute buy and sell decisions are quickly made by traders to make lot of money. But one of the wealthiest person on the planet who has made his fortune through stocks, is not a day trader. He analyses the company, studies their balance sheet for decades, not just years, meets the management of the company he wants to invest in, tries the products and then invests in huge chunks, sometime taking up a few percentage points of the company stock. And then he sits and waits, at times for decades and sees his fortune grow. Warren Buffet personifies PERSISTENCE.

They say when it comes to persistence, its easy to advocate, but when one has to put it into action, the grilling, the boredom, the endurance, the sheer pain of doing an activity when the the world contrives to tell you to stop, is hard. So I have my own story of persistence to share.

This was Jan 2018. I had just returned back from Mumbai, brimming with pride and full of enthusiasm, as I had bettered my full Marathon  PB (personal best) by a whopping 40 minutes and was figuring out the training plan for my Half IRONMAN attempt on Feb 18 in Delhi. For all those who are not aware, Half IRONMAN is a tri-athlon competition, which involves three activities, Swimming, Cycling and Running, in that order. The Event involves 1.9kms of swimming, 90kms of Cycling and 21kms of Running. All need to be done back to back, one can take as long a break as you wish, provided you do it all in less than the cut off time of 9 hours. Having signed up on being prompted by a friend in Nov 2017, I did not have much of a plan. Since I had been running for 4 years and had been a decent swimmer right from childhood, I was only worried about Cycling mileage.

To test out my Cycling, I straight away rented a bike (No, I did not own a cycle then) and did an awesome 100km ride on Jan 26 with a bunch of people, going from Gurgaon to Rao Dhaba on NH8. Totally thrilled on achieving my first milestone, I decided to go for a dual challenge of Swimming and Cycling on the next weekend, which was Feb 2nd. Winter time in Gurgaon, all pools are shut, but there was a newly opened covered pool in a school close by and I ventured to the same at 6am on a chilly, foggy and dark morning. As I entered the pool and touched the water, tt was definitely not warm, but I decided to swim anyways. After jumping in and doing the 50 odd laps that I had planned, I rushed out, dried myself quickly and put on clothes to rush back home. Having totally freaked out by the cold water swim, I dropped the subsequent cycling plan.

When I was leaving the pool, I had dried my legs and wore socks, but the slippers were wet and my socks were wet for the 15 min drive back home. All this led to me having a horrible cough and cold the very next day, which was so bad that it lasted for almost 2 months. I have never had that bad cough in my life, ever. Pools of mucous flowed from my nose in the subsequent weeks and no medicine had any effect.

Anyways, the subsequent weekend on Feb 11, with swimming ruled out, i barely managed a 60k cycling drill, with my bandana all soaked in cough at the end of the ride. My friends who joined me were shocked as to why did I even do the ride. On the eve of the event, on Feb 17th, I knew I was ill prepared for the event as I contemplated on my chances. The cough had gone from bad to worse and though I did not have fever, I was weak and two of my coaches whom I consult, clearly told me not to go for it. One of them even told me that If I end up coughing in the pool, water may go into my lungs and I might even die! I then spoke to a close friend of mine and he told me this: “Look Hetal, I know you. If I just tell you no, you will not listen to me. So do this. When you wake up tomorrow morning, look at yourself in the mirror and ask yourself, are you mentally ready for it. If your mind says yes, your body will just follow. Go for it.”

Having got my bike placed in the car the previous night and my cycling, swimming and running gear neatly placed in the bag I woke up at 3:30am on Feb 18. Feeling good about the event, I decided to go for it and reached the venue, Talkatora Stadium at 5am for the 5:30am start. The majestic stadium looked awesome with flood lights on and the water was calm, nice, warm and enticing. I took the plunge and started swimming. Against a target time of 55mins, I actually completed my 38 laps in 50 mins. 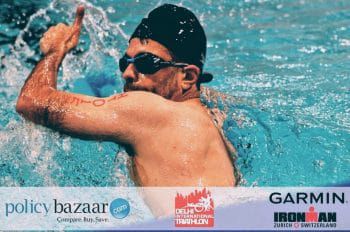 Totally thrilled and having not only beaten the cough demons, but even bettered my time, I quickly changed and got ready for cycling.We had a 10km loop around the stadium, so we needed to do 9 loops of the same. The first 5 loops were a breeze. I was totally enjoying myself till then. It was at the 7km mark in the 6th loop when I heard a disturbing sound…psssssttttttttttt.. I stopped, got down and noticed, my back tyre had gone flat. Not having prepared with a puncture repair gear like what the pros do, I had no option but to drag the bike back to the start point.

Fortunately for me, the organisers had a fantastic bunch of volunteers who had the repair station at the start point and they quickly changed the tube to get me going for my 7th loop. I had hardly gone for some 10 meters that I heard a disturbing sound again…. pssssssstttttttttt..  To my utter disbelief, the back tyre, the one in which a fresh tube had just been inserted, had gone flat again!!.  Not worrying about the hows and whys, I rushed back to the repair station. 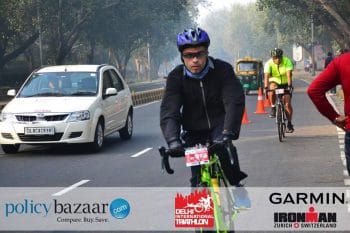 The volunteers were surprised to see me again. Not wanting an explanation, they understood the problem and quickly put yet another fresh tube and got me going. The 7th and 8th loops, fortunately for me after that drama, went fine. In the 9th and final loop, at about the half way mark of 5kms, I heard yet another disturbing sound… pssssssstttttttt… Shocked to see, my back tyre had again gone flat. I looked at the tyre to see if there were any nails or anything that could have caused it the third time, but there was nothing.

This was the break down moment for me. After having had the bad cough due to which I had almost cancelled, taking up the challenge and eventually doing well in swimming, I had managed 8 loops despite the previous two punctures and was nicely on my way to ending my cycling part and now there was this THIRD puncture. I sensed that God did not want me to finish the race. He was sending clear message after message that I should stop and I, like a fool was carrying on nevertheless. I had the option of just hailing a support vehicle to go back to the start point and calling it off. But I said NO, if God does not want me to do it, that’s all the more reason that I prove him wrong. I decided to drag the bike back for the 5kms to the start point.

By this point, I had fallen way behind the others. People who took  75 mins in swimming completed their cycling routine and were already running. I trudged back to the start point, parked my cycle and changed my T-shirt and started the running. As a Marathoner with a personal best timing of 1:55 for the half marathon, completing the 21km distance within the remaining 3 hours would normally have been easy. But on that day, frustrated as I was with the cycle punctures it was hard. At 10am, it was getting hot as the sun was up and parts of the route had been opened up for the traffic, so in some parts of the loop,  it was a challenge to even walk, forget run. It was with a combination of run-walk-run that I somehow managed to complete the first loop in just about 100 mins, with another 80 mins left for the last and final loop of 10kms.

Having exhausted my own supply of hydration long back, even the water aid stations had no water or food left as I trudged along the last 5 odd kilometres. I was wondering to myself, as to what was a I thinking when I had signed up for this event. But I was clear about one thing, if there was a day when I could be a half IRONMAN, it was TODAY. There would surely be more opportunities to do the event again, but AFTER the quantum of effort I had already put in, in the swimming and cycling, I just could not give up. I had to muster that little extra energy in myself to keep going and I knew it was not impossible. 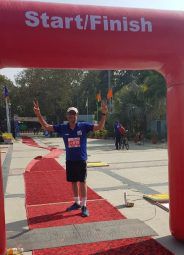 The clock at the finish line said 8hrs 40mins as reached. A totally pathetic time by any standards for me otherwise, but after what all I had gone through, I was just thrilled that I completed the race within the cut off and got my totally deserved medal and certificate, to officially become a Half IRONMAN. For the record, amongst the 270 odd participants who took part in various events on that day, I was the ONLY one, who had reported a flat tyre. Talk abt irony and fate ! 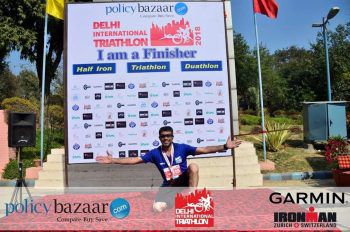 I have read countless books by endurance athletes and learnt in detail on how they conquered numerous challenges of pain, injury and frustration over some extremely gruelling events and races. I am sure people in armed forces would also have lots of interesting stories of grit and valour. Like all these stories of these great athletes and men, on that day in 2018, I had my own little story of PERSISTENCE, where I continued, regardless of what others said, ignoring my own mind and not even listening to my own legs which were dying for me to just stop and go back home. I just kept going on till I reached the finish line. And that’s what power of persistence is all about.