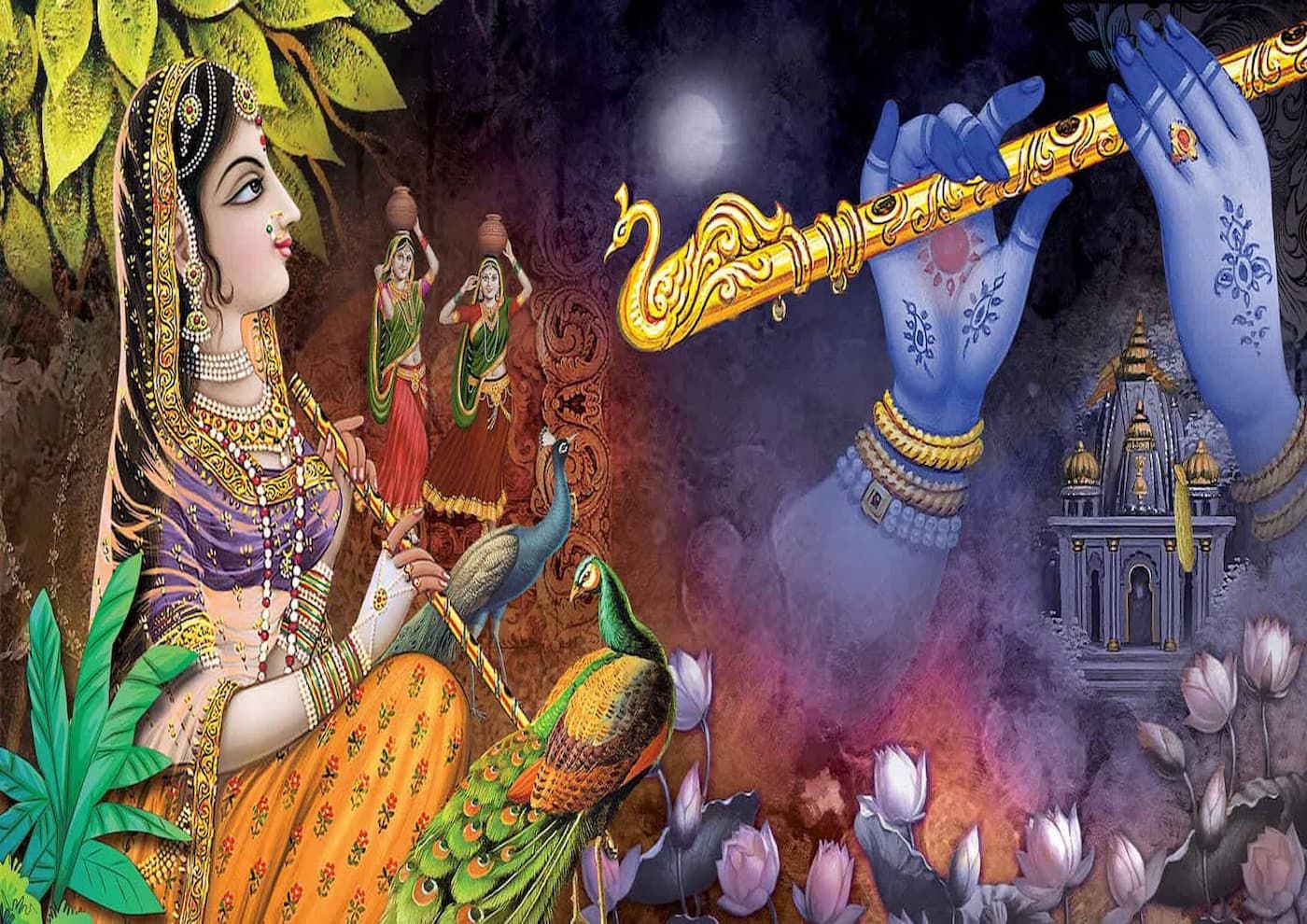 Radha, The Divine Mother of Love

She was Krishna and Krishna was her!

Recently, I came across an engaging question: Why didn’t Krishna marry Radha? The write-up that posed this query gave a Dvaita Vedanta viewpoint. That is, Radha is a seeker who’s pining for Krishna. The beauty of a devotee’s Bhakti and love for the Divine in that presentation brought tears.

Even so, within a few moments, that motor-mouth mind of mine started rattling! As we know, Lord Krishna lived and breathed philosophy. He gave out the extraordinary manual of life in the Bhagavad Gita. Why would someone so insightful and Divine leave his lover longing? Could there be more to this story?

Before we proceed, I would like to point out that, as per my mentor Om Swami, there’s hardly any mention of Radha in Sanatana Dharma’s scriptures. Possibly, she was just a mere concept or a faculty of someone’s imagination. Still, I go ahead the discuss this pair from the point of the Puranic tale. This post presents an Advaita Vedanta view of this timeless saga of selfless love.

As the Puranic stories stand today, Lord Krishna fought for women’s empowerment. To the point where he slaughtered the ego of many and made them repent for insulting Draupadi.

Krishna even chastised Arjuna for not stepping up and fighting for his wife. Further, to save them from disgrace, the Lord married the sixteen thousand women he rescued from Naraka-Asura.

Krishna was the Poorna Avatar, a complete incarnation of Vishnu. At the height of women’s empowerment, Lord Vishnu holds his Sahadharmini Mother Sri Devi in his heart. The word here isn’t wife, consort, or devotee. Lord Vishnu had numerous of those who thronged him. The term here is Sahadharmini.

In Sanskrit, Saha means combined or together. Dharmini is the feminine and Dharmin is the masculine for a follower of Dharma. In this context, Dharma implies a cause or purpose.

Colloquially, Sahadharmini means a wife. Many wives support their husbands in their Dharma, so they are Sahadharmini. However, this is a very worldly definition. Going beyond the boundaries of body and mind, any woman can be anyone’s Sahadharmini.

A woman who supports someone unwaveringly in their Dharma is their Sahadharmini. While Rukmini was physically married to Krishna, Radha and Draupadi got married to other men. Yet, all of them were Krishna’s Sahadharmini-s.

Rukmini stood by Krishna in all of his endeavors. Draupadi became the stimulus of Krishna’s purpose. And, Radha encouraged the Lord towards his cause. Hence, Radha, Rukmini, and Draupadi are all considered as Mother Sri Devi’s incarnations.

In his youth, Lord Krishna was adamant about marrying Radha. Eventually, he brought up the matter with his parents, Nanda and Yashoda. But, they weren’t in favor of it because Radha was a few years older than him. Still, not the one to relent, Krishna put his foot down.

Around that time, a powerful sage approached them. That sage started looking into Krishna’s astrological charts. Upon completion of his analysis, the sage exclaimed, “This is the Lord himself! He is going to bring reform in this world.”

The sage’s words shocked Krishna’s parents. Till then, the Lord was a playful, stubborn, and naughty child. What was he going to do in this world? Even Krishna was disturbed by the sage’s predictions. So, he ran up a mountain and sat in meditation.

Sitting in solitude atop that scenic hill, the Lord recollected that he was Lord Vishnu. From then, it was a case of no turning back. Krishna assumed a different demeanor. Within a few days of this occurrence, Krishna’s unjust uncle Kamsa sent him an invite for a duel. Lord Krishna bid goodbye to Radha, his parents, and the entire village in his sense of duty.

While I’m not sure about that story’s source and authenticity, it fits in well in this context. That folklore describes a tear-jerking conversation between Krishna and Radha. When Krishna spoke about his purpose, Radha didn’t say, “I don’t care! Marry me now.”

Instead, she said, “Krishna, I’m your weakness! You’re way too attached to me. If we get wedded, I’ll be a burden on you. Then, you can’t focus on your tasks. For the sake of this world, my beloved Krishna, let us not get married.”

Even though Lord Krishna had many wives, he never got attached to anyone after that. Alternately, he conquered this world with his wisdom and unconditional love. And, for the rest of her life, Radha remained in the village of Vrindavan. She took care of Krishna’s (adoptive) parents and relieved the Lord of that duty.

Whether Radha and Krishna got married will remain a mystery. Going beyond that, if we examine Radha’s parting words, we can learn something profound. Her attitude represented the pinnacle of Advaita philosophy. In other words, she is Krishna and Krishna is her! Hence, Krishna’s cause was her purpose. She understood Krishna’s intent as only a rare few did.

Radha had the choice of keeping Krishna for herself. Yet, she let him go and supported her lover’s cause wholeheartedly. Her selfless sacrifice made her a Rani, the queen. She remains evergreen and is an inspiration for all of us.

In my eyes, Radha is not a demure woman crying for her lover. That Vairagi or the non-attached one, revered for her unconditional love, had a heart of gold. Through her, the Divine demonstrated the beauty of selfless love.

To me, Radha is the supreme Divine Mother who is the Shakti or energy of the Lord himself. She is the Mother Sri Devi, the source of this universe and beyond. A soul as beautiful as Radha isn’t a seeker, but the sought!