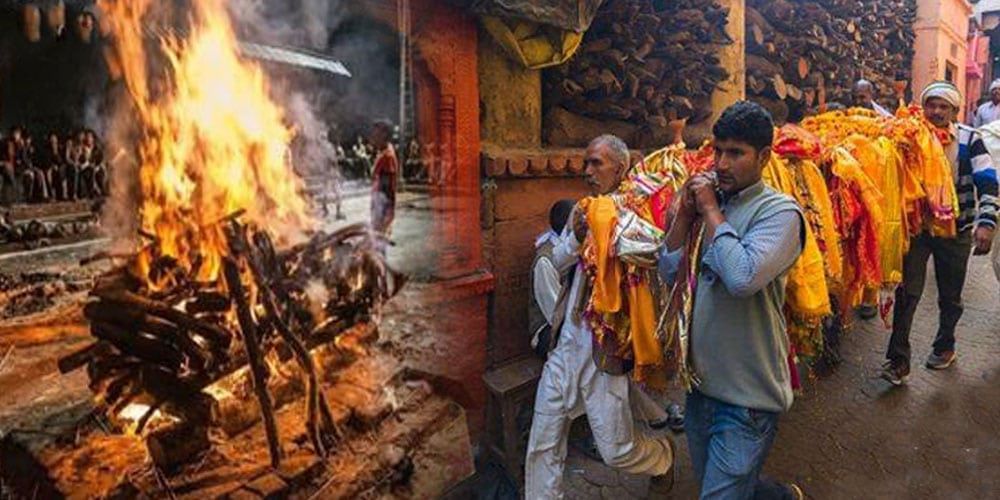 The last journey of a motherly soul

Shastang Dandavat at your Lotus Feet Swamiji. I can not express my gratitude in mere words for what you are doing to me in all the areas of my life. It was the first Swamiji Saturday yesterday and your blog just fired me up. The transcendental knowledge flowing from you is absolutely divine grace. I want to apologize as I am praying to you for the well being of a lot of people (increasing your task manifold), but you are the Mother and the Father. When a child is in pain, he / she remembers Mother / Father.

It was a normal office day yesterday. After my morning rituals, I went to the office as usual, but only to get an unusual experience for the first time in the life span of 37 long years. My colleague Shreetesh Tripathi’s (Shree) mother Smt. Asha Tripathi had not been keeping well for a while. She had spinal chord related issues which had caused a lot of neurological problems. All of a sudden, on last Thursday, she stopped responding and was taken to the hospital. During her treatment, she had a cardiac arrest and slipped into ventilator based life support system. Shree told me that her condition was critical. On Friday and Saturday, during my morning rituals, I prayed for the well being of the motherly figure. I don’t know, but while praying for her, I was crying vehemently.

Yesterday, at 10 AM Shree told us that she had suffered another massive cardiac arrest and her soul had left the body. I do not know what moved inside me, I suspended all my official activities and started searching for a cremation service package near us on the internet. Another colleague also joined me. We made a call to one such service provider who agreed to arrange all the requisites from materials, vehicle pandit to slot booking at the crematorium, all in one package. We did so because we knew that Shree was busy in completing the hospital formalities.

I left the office with permission from my division head and reached Shree’s house. For the first time ever I was seeing the body of a mother with her motherly affection visible on her face even during utter pain. I would like to mention here, that I am a very protected child. My parents had the superstition that children must not see dead bodies or participate in death rituals for reasons best known to them. But I politely disagree; rather they should experience this truth of life at an early age for their spiritual development and the depth of understanding rather than living in a fancy world.

Uncle was crying as he lost his life partner with whom he had a wonderful journey of raising 4 children: 3 daughters and the only son, Shree. Previously we had met uncle on various occasions and he has the typical Lucknow Tehzeeb. The sisters were crying, but Shree did not have the option to do so as he had to make various arrangements as per Hindu brahmin rituals. Coincidentally, he also belonged to Kashyap gotra, the same which I belong to and in that sense, he is my brother.

I took out your photo along with Maa Gayatri’s from my wallet, Swamiji. I prayed for the smooth eternal journey of her soul, to you. You had a really nice plan for me for which I am grateful to you. As the pandit arrived and the rituals started, for first time in my life, I witnessed the entire process. How the bamboo bed is made, how the mantras are pronounced on this occasion. Uncle was the Karta for the ritual as Shree’s wife was 7 months’ pregnant. I faced the reality of life unfold in front of my eyes.

Asha aunty was decorated like a bride with a red saree, sindur on her head. She was in full glory. Cow dung was kept in an earthen pot and was lit up. That is why we call cow as Gomata in Hindu religion. Starting from birth to death, Gomata plays a lot of roles in our lives. In some sense, she is an avatar of Gayatri Mata.

After the Puja, the family members were instructed by the pandit to have a parikrama of the body, three times and to offer Tulsi leaves with Ganga water and Akshat (rice) with flowers. Almost the entire division of our office was present. But, pandit ji pointed out towards me to make the parikrama after the family parikrama was over (may be, you wanted me to experience this Swamiji). After which all the other colleagues and neighbours followed.

Then the bamboo bed (arthi) was lifted and I was given another task of holding the Ganga water in a copper vessel and providing physical support to uncle who is not very stable physically after 2 hip surgeries. I provided him the support while climbing down the steps (2 floors) with the chanting of Ram Naam Satya Hai. Literally I was leading the journey alongside uncle. In the last journey vehicle, I helped uncle climb up to the seat beside the driver so he could sit comfortably. Here, the pandit ji again instructed me to sit alongside uncle holding the Gangajal and providing support to uncle while my colleagues carried the body on the back side of the vehicle.

I could not believe that I was travelling in a last journey vehicle alongside a fatherly figure for the last journey of a motherly figure. I cried inconsolably (you know the reason Swamiji). Uncle was crying intermittently in bursts. On a flyover as the road was not in good shape at all, I requested uncle to be cautious and hold the matka carefully. To my awe, afterwards while having a discussion with Shree, he revealed that, Aunty used to tell Shree to drive carefully on that particular flyover whenever Shree took her to the doctor for treatment!

At the crematorium, Uncle used my shoulder support to get down the vehicle. Then the Gangajal and matka were kept at the proper place. Now it was the time to take Aunty’s body to the Pyre. Somebody inside me pushed me to offer shoulder service to Aunty also and for the first time in my life, I felt the weight of the arthi as if Swamiji wanted me to experience this through Aunty. Burning a body was a quite painful scene for me as I had never seen such a thing in person in my life. Before that Pandit ji instructed Uncle and Shree to call their partner and mother, respectively, for the last time near the ear in the same affectionate manner in which they used to address her when she was alive. It was a really emotional moment as both of them burst into tears.

Finally, the body was offered to the Fire God (Agni Dev) and he blissfully accepted the offering. I was just wondering the truth of Panchatatva Vilin of the body. Uncle took a complete bath. We all took a symbolic bath. Pandit ji gave an iron nail to Shree to keep it under the pillow while sleeping for 13 days. I enquired the rationality of the practice, to which the Pandit ji replied that aatma will not haunt him. It was really hard for me to believe for me, how on earth, a mother can haunt her own children, if any of the learned os.me family members can explain on this?

I came back home, took a complete bath with some neem leaves to ward away any evil spirit who might have piggybacked on me from the Shamshan. But with your loving presence Swamiji, who can dare to bug me down from the other side of the world!

Yes, it was really a rich experience, which was long pending to be experienced. I request all the os.me members to pray for the sadgati of the motherly soul.

Swamiji, please guide her to the divine light and make her journey blissful. Physically, she suffered a lot during her last five to six years on earth. And please bless Shree and Sneha’s (Shree’s wife) child in womb.