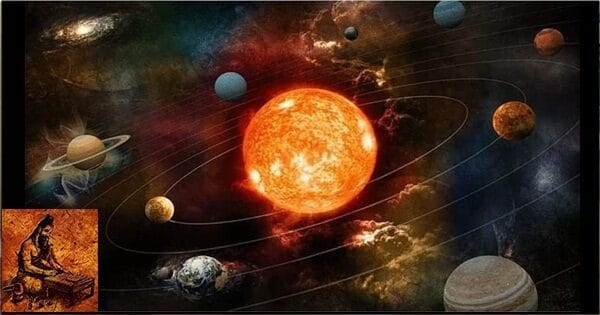 Our Great Rishis And Ancestor New These Things Yet We There Own Descendent Don't Appreciate There Work.

“This earth is devoid of hands and legs, yet it moves ahead. All the objects over the earth also move with it. It moves around the sun.”

“The sun has tied Earth and other planets through attraction and moves them around itself as if a trainer moves newly trained horses around itself holding their reins.”

“The sun moves in its own orbit in space taking along with itself the mortal bodies like earth through force of attraction.”

“The sun moves in its own orbit but holding earth and other heavenly bodies in a manner that they do not collide with each other through force of attraction.

“Sun moves in its orbit which itself is moving. Earth and other bodies move around sun due to force of attraction, because sun is heavier than them.”

India started astronomy, for “time keeping”. Main requirement was to repeat Satras (or yagnas) in repeated cycles (year after year). They wanted to do it precisely (1 year means 1 year). So, India was an not inventor of foretelling. Greeks started copying Indian astronomy. They were amused/amazed at the Indian capability to time and predict “rains” (actually seasons).

Greeks were a war machine at that time. Planning attacks in favorable season was a great strategy for them. So, the person who can predict weather became a very valuable asset for them. They recruited people with such capability. They wanted many intelligent Greeks to actually go to  India and learn from them. This “foretelling of seasons”  trickled down to foretelling individual fate in Greece. Greeks developed this art. This was part of Romaka Siddantha (Romaka is Romans, who inherited it from Greeks). In India, We had many Siddanthas like Pythamaha siddantha, Romaka Siddanta, Soorya Siddanta etc. Varahamihira consolidated 5 Siddantas and wrote his refined Siddanta, popularly known today as Panchasiddantika. This “pancha siddantika” is our knowledge base even today for Panchangas and Indian system of Jyotishya.

Varahamihira is identified as “Maga Brahmin’ by his successors. In his name, we have Mehrauli (Mihira Avali = Mihiras agrahara) in Delhi. But, Maga Brahmins are not Indians by geography. Maga Brahmins migrated to India from Maga, for various reasons, at various point of time.  Magas were traditional priests for Persians (Iranians). When Iran was full of Zoarastrians, Magas were hired for temple duties. Magas were sun worshipers. So, they were considered as “Brahmins” by Indians, as they were doing exactly the same role. This “Maga” is nothing but today’s “Makka” in Saudi Arbian coast. It was on the popular silk route, going to Damascus (Syria). Syria was the distribution point for Asian and Chinese goods. Varahamihira, who was a Maga Brahmin was trained/learned in Persian and Greek knowledge systems from childhood. He was an expert in it, before he came to India. He came to India for higher learning. India had “astronomy seat/school of learning” in its universities like Nalanda, Takshshila etc. After learning superior Indian system, he deprecated Persian/Greek books and wrote consolidated/updated book. That is Panchasiddantika. Varahamihira did not import Persian/Greek knowledge to India. If that was the case, he would be refining Romaka Siddanta (not deprecating it). He was trying to harmonize/upgrade his knowledge with superior Indian knowledge system. So, Indians were ahead and knowledge flowed from India to west.

A great misnomer exists about Bharatiya knowledge system. It is not at all dependent on any bookish knowledge including Vedas and Upanishads. This knowledge was obtained by meditating on Brahma (so, it is Shruti, heard in brain). Ultimate knowledge is possible only through meditation and/or Bhakti. If it is presumed that during the days of Varamihira and even thousand of years before him the human lifespans were similar as today then it is not possible for any human being to observe astronomical cycles which repeat only in thousand of years. Even Parashara system of Mahdashas applicable to human lives is 120 years way beyond average sensible human life excluding childhood and old age.

India had traditional schools (what we call as Guru Shishya Parampara). That is why we had ‘n’ number of Veda shakhas (the way, a school teaches Vedas). In similar fashion, ideology or astronomy was also groomed. So, it is possible for people belonging to a school to observe a phenomenon over 1000s of years. If one studies astronomy books, this is clearly evident, as authors always give credentials to their Gurus and also refer to scientific data observed by their predecessors. They give references and Indian knowledge system was built in spiral fashion (just exactly like the way, we are improving and building science incrementally today).

Vedas has been dissected and evolution patterns are identified. It is easily possible to establish their evolution time also, as the authors have given astronomical observations. Traditionally it is believed that, Vedas were passed over by Brahma. But Vedas themselves declare, a particular Rishi compiled it. So, each stanza is ascribed to an author. Some authors dedicated their work to their family/favorite ‘God’. So some are ascribed to “Devas” rather than to human composers.

If Vedas had come from Brahma all at one time, we should not be seeing difference in words, language, pattern etc. Words and languages evolve over a period of time. Same thing happened when Vedas were compiled too. So, evolution of words and language can also be identified. That itself proves, Vedas evolved over a period of time. For eg, some parts of Vedas speak about “mighty Saraswati river”, while some other parts describe the river as “almost drying out”. Similar geographic variations/evolution happening in different point in time are described. Important are changes in astronomical references. So, it is easily provable now that, Vedas were composed by humans. Passing over by Brahma is an allegory denoting it as ‘holy’ or sacred. Knowledge has to be ‘holy’ to give enough importance to protect it.

Technically there is nothing wrong in the claim that, “Brahma gave the knowledge of Vedas“. Vedas were some higher “knowledge” (for that period of human evolution) and creators got it in their mind due to their “higher intellect”. Not everyone can create this kind of higher knowledge (Why nobody explained nuclear physics exactly like Einstein before him??). But that process is same for modern subjects like Maths/Science etc. This UN-explainable “higher intellect power” is attributed as Brahma. This is exactly like Ramanujam described. He got his knowledge from “Devi” directly into his brain. But, we still call Ramanujam created his Mathematics. Similarly Vedas were created/composed by humans.

Modern scientists are not yet successful in explaining human intelligence. How/why some people get it, while others do not think in that direction is still a research subject. A great scientist’s son may not able to pass high school also. This demonstrates that, intellect is not transferable from parents to their offsprings. So, it has to be attributed to “God”.  Since the phenomenon is un-explainable by modern scientists, it is still a grey area. Till we understand this process of intellect, we have to consider it as “God given”/gifted”. So, we need to understand context properly and what is meant.

For spiritual reasons, if you want to consider, Brahma/Vishnu came down to earth and handed over Vedas to humans, feel free to hold that view. You do not need to discord your view for a logical argument by a science based rational arguer. Be comfortable with what you believe and trust. But it is difficult to argue that “Brahma alone gave the knowledge like Vedas” and humans did not create it. At least it is not arguable, with non-believers, while evidence from Vedas itself (internal evidence) points in the opposite direction.