I have been fascinated with Astrology, Palm-reading and Tarot since I was a child. Even though I am not trained professionally, I have read several books on the subject. So, if you are new to field and want to learn some basics of Vedic Astrology, I will present to you a short post.

Before diving into some basics, I would like to put up some points.

Why should we study Vedic Astrology?

Simply put, so that you can be better, spiritually as well as materialistically. You must understand few points though –

Any resources that you can use?

Let’s dive into some important concepts:

The boxes are called houses – 1st, 2nd, 3rd…12th. The number written in the upper central box denotes your Lagna Rashi (ascendant) & its master is your main planet. So, the ascendant is the first house, and you need to read counter-clockwise to read the houses 2, 3, 4 till 12. Again, numbers are not house numbers but rashi numbers.

The Main Planet actually represents you as a person – an individual with a personality! Its (Lagna & Lagna Lord) strength will denote how successful and satisfied you will be in your life. The planets situated in the first box + the planets having aspects on (what it means will come later on) it, will also have a deep influence on the individual. 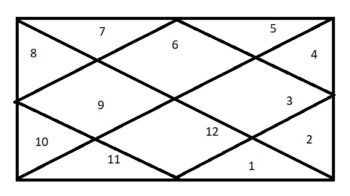 For each of the Zodiacs I have listed below the main planet hence: –

The Main planet is bound to give good results to you unless it is extremely badly placed or debilitated. You should always try to strengthen your main planet if you want to be successful(materialistic) in your life!

An important point, if your main planet is present within the sign e.g., the main planet is Jupiter residing in Sagittarius Lagna or just opposite to it (in Gemini), that person is bound to be extremely lucky (lest there is some major problem in horoscope affecting adversely). E.g., Sachin Tendulkar is born with Virgo ascendant with Mercury (its master) in Pisces, having an aspect on it.

So, how to judge any planet (especially the main planet) to be strong in horoscope?

If a planet is at its uchha – highest point (like being at a picnic spot where you are with friends and have most energy), mool-trikona house (like your office where you work diligently), own house (home is home, we feel safe, comfortable and at home) or friends house (discussed later), it is considered as favorable to the individual. If the planet is having aspects (as defined earlier) on any of the above, then also it is good! E.g., a strong Venus in its own house & a strong Moon in its high with aspects from Jupiter & Mercury can bestow the individual with a marriage with a favorable partner!

The Most Important Planet in your Vedic Astrology Chart

So, that’s your main planet and I have already discussed that earlier. After that the most important planet in your chart is the Moon. Why? There are multiple reasons for the same.

Moon is the planet of coolness. I have witnessed people with Cancer ascendant (ruled by Moon) to be extremely cool & content with life, in general. They are pretty satisfied with things in their lives. They are not very striving if the ascendant is not under aspect by some other planet like Mars or Mercury that may actually push a native to work hard. When the planet Moon or the ascendant Cancer is under aspect of some bad guy (malefic planet), the coolness moves to carelessness. A weak or debilitated Moon (in Scorpio) will bring unhappiness & loss of coolness.

If the Moon does not have a planet with it, or has an aspect on it (say Mercury, Jupiter, Sun, Mars, Venus, Saturn), it is considered weak. Why, because it is a social planet who loves friends. If the Moon does not have any planet before or after it (in the houses), again it is weak. If the Moon is under the aspect of Rahu or Ketu, it brings unnecessary worries & lack of stable mind to the native! I have observed that if the Moon lacks the paksha bal (the power by distance from the Sun), that’s why a full moon day has the strongest Moon. If a person is born on Amavasya (New Moon Day), again the Moon is weak. It is also considered weak if present in 6th, 8th or 12th from Ascendant (first house).

Moon is extremely strong when the birth takes place on the full moon day! It can alone ward off other evils of the horoscope, alone! It is also strong during Shukla Paksha (brighter moon cycle). If the native is born in Krishna Paksha, the moon gets bad, but if it is accompanied by some good guy – Jupiter, Mercury, Venus or is under aspect of them, it turns to good!

Moon is a natural benefactor of luck. A good moon gives extreme satisfaction to the native. If well placed with Jupiter, it will take the native to the heights of spirituality.

The reason why I wanted to discuss this is that, almost all of us have some sort of anxiety, insecurity about future. And all that is in mind. I have already discussed the most important planets in one’s chart – the main planet (ascendant lord) & the moon. Other planets are also important, definitely, but these two planets are most significant. They govern you, your physical existence on the planet earth, your mind and your direction of life. If they are under bad influence, with less strength, in (so-called) bad houses – 3rd, 6th, 8th, and 12th, none of the indicated Rajyogas in your chart will fructify. You will almost never feel confident, stable etc. Rather you may be a VP in your company, but anxiety and nervousness will not shun you.

Following are some of the combinations which show anxiety and nervousness in chart:

So, how to tackle this? If you are on this portal, definitely you have questions about life that you are looking for answers to. Following are some of the things that you can do:

Guruji (Om Swami) has talked about meditation and tratak extensively in His encyclopedia on meditation – “A Million Thoughts’.

All planets aspect the 7th house (or bhava) from them. It means that they have an equal presence (in terms of their energy) in the 7th place to their current location. E.g.

Consider a horoscope of Sagittarius Ascendant. If Venus is present in the 6th house (in its own house Taurus). Then it will aspect or display its complete presence in the 12th house (which is 7th from 6th) too, in the Scorpio. 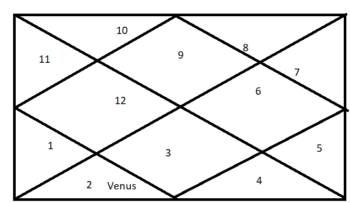 Besides the above rule there is an additional rule for Jupiter, Saturn & Mars.

This is all about some basic Vedic Astrology as per ancient North Indian style. Apologies, but I am not much conversant with South Indian style chart, so I haven’t included that. Also, I am still a student of this science, so some mistakes may have crept in. Please pardon me. Hare Krishna!

Seashells
Maya: The Story of A Parrot