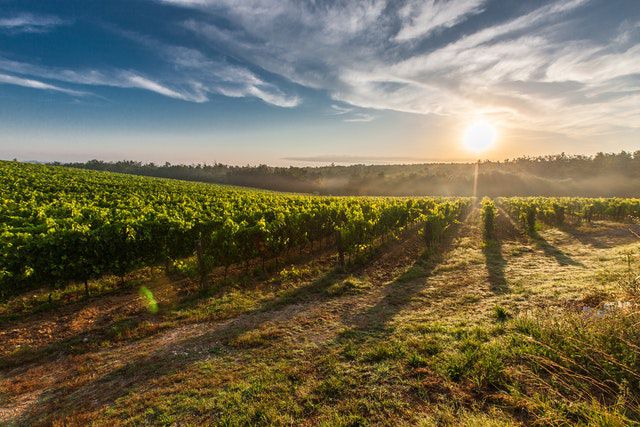 Gratitude, Happiness, Faith and Resulting Conviction to Keep at It #WritewithOSMe

Plants are also living creatures. Many wouldn’t agree – they don’t move, they don’t think, they can’t think. Adam, though, thought otherwise. Lovingly brought up by his parents, dotted on by his older sister, he had had a beautiful and memorable childhood. They hailed from a family that were farmers since the past four generations in California. He had practically grown around crops, vegetables and fruits at their Redhill Farms in the town of Dunsmuir.

One of his earlier memories was of sitting high up his father’s shoulders, the sun’s rays lighting up the acres ahead, the wind caressing his blond hair, and him being delighted each day about stories of an older and a more golden era of farming that his ancestors passed on to the generations below. As he grew the stories morphed into lessons of the types of crops suited for each season, the ways to till their field and developing expertise on finding the best of the produce from that season.

Now a strapping youth of 20 years, he had decided against pursuing any further education and helping his dad tend to the fields. When he started he had noted for a few years now that their produce was no longer of the same great quality – their oranges did not come out as sweet as before, their wheat was not longer as golden and smaller in size and their cabbages were tinged with a brown colour that signified some sort of disease. His father had initially tried all possible methods to get back their produce to the same old glory ranging from changing the sequence of plantation, treating the water to hopping onto the bandwagon of new and promising yet untested methods of genetically modified seeds. The two years of drought didn’t help either. Slowly but surely over their produce lost the shine and respect it had commanded from their buyers.

This had started to impact their lives as well. They had to sell off portions of Redhill Farms to clear off the debts taken. No longer did they share their produce with the town parish and the charities. This changed his parents. Their sustained yet unfruitful efforts had steadily risen a general feeling of inadequacy that had turned into resentment and then finally into unhappiness and moping. Their dinner conversations were replaced by silence and monosyllabic pithy exchanges since his parents didn’t want to discuss the crisis they were going through.

He agreed that they were no longer the Redhill Farm their ancestors left behind, but despite all failures they had a to find a way out. He was still thankful that they had their farms, albeit smaller with them. He thought that one way out would be to visit the cities and their universities and companies to talk to researchers about a way out of their present situation. His father wasn’t convinced and let him take a lead – he was already considering moving out of the profession and heading into a different profession, may be a life in a city. However, despite his best efforts Adam had been unable to find a solution that worked. In fact, his father had accused him of messing with their soil with the various treatments done over the last few months.

That didn’t bother Adam. He was looking at other options as well – may be a foray into animal husbandry or growing flowers suited to their soil. What kept his going was this intense feeling of gratitude for a good life that he had had. He had initially struggled to understand why he was being subjected to such difficulties. Everywhere he had looked since then – the scriptures, the self-help books, the monks, the motivators – he concluded that he couldn’t chase happiness. What had happened, happened. He could only control his reaction and subsequent actions. More importantly, happiness wouldn’t sprout itself without his own efforts, much like the produce they nurtured from seed to fruition. It was itself an outcome of gratitude. He had faith that the earth still had life and from it would still bloom a prolific range of crops.

Adam decided this while they found a way out, he would drag and drown his family through the waters of gratitude to tide over these times. It led to a reversal of roles. Over multiple evenings, he nudged at times, begged at others and persuaded at still others his father, mother and sister to wade through the fields as he pretended to ask to help him examine the progress with the current soil treatment and irrigation system. He asked them hypothetical questions on what grandpa would have done in such a situation. They had lunch under the Jacaranda tree that probably dated their four generations there. They had cheese and wine in the evenings by the brook that went by their fields.

True love and gratitude don’t probably dissipate. It gets hidden by your sufferings, expectations and resentment. The family’s earlier altar of obeisance had been their farms. A reacquaintance made them realize that while the crops were not in the best health, their farm was still beautiful; while the elements were not in their favour, many crops still responded to their sweat and blood. It was about taking the things that were going for them and starting to run with it. Adam’s father was no longer cross or accusatory.

The family again took up their earlier respective roles and started to work towards sustaining what was working – the wheat was still doing ok; the cherries were still round and juicy and the beetroot was somehow unaffected by the soil. They didn’t turn around things but started to think about ways to carry on with what worked and to consider options for things that didn’t. For the portion where the cabbages were impacted, they decided they could probably have a section where they grow fowl. Another area cleared after the failed lemon crop could be used for planting seasonal flowers.

Taking such decisions took the family back to their roots, their fields and the work they once used to enjoy. One fine morning, Adam was inspecting a newly cleared area when he noticed a patch of an odd coloured vegetation across a large section. It wasn’t like anything they had seen. He quickly hollered to his father, and both inspected the source of their curiosity. The leaves were a hue of yellow, red and purple blending into each other, and they possessed a prickly hair kind of structures. The stem was brown yet green. They were not sure – were they weeds? Were they the sprouts from seeds his father had put in when Adam was away due to ill health? No.

The father and son due uprooted one of the plants and took them to the laboratory in the Sacramento. The researchers there could not find any such plant listed previously. A rigorous examination and investigation for some more months resulted in a startling discovery – the various treatments applied to the soil had transformed their soil and had led to a mutation in the seeds sown for oranges. The researchers bet that these plants if led to growth could produce something never seen. Over a course of the next two years, while the likes of their wheat, fowl and lavender flowers sustained them, the new plant got a new official name and birthed huge, sweet oranges never seen.

And it was only in Redhill Farms that anyone could find those oranges. The demand in the market took off and they started to slowly treat the rest of the farm with the same methods they had done before, planting the seeds from this new orange species.

Good times came back, and they again were the buyer favourites for their produce. Adam’s faith, gratitude and leadership had led them back to a farm that they loved and nurtured, with the farm responding back to them. Their gratitude and the resulting faith and persistence had birthed a new happiness for the Redhill Farms residents.