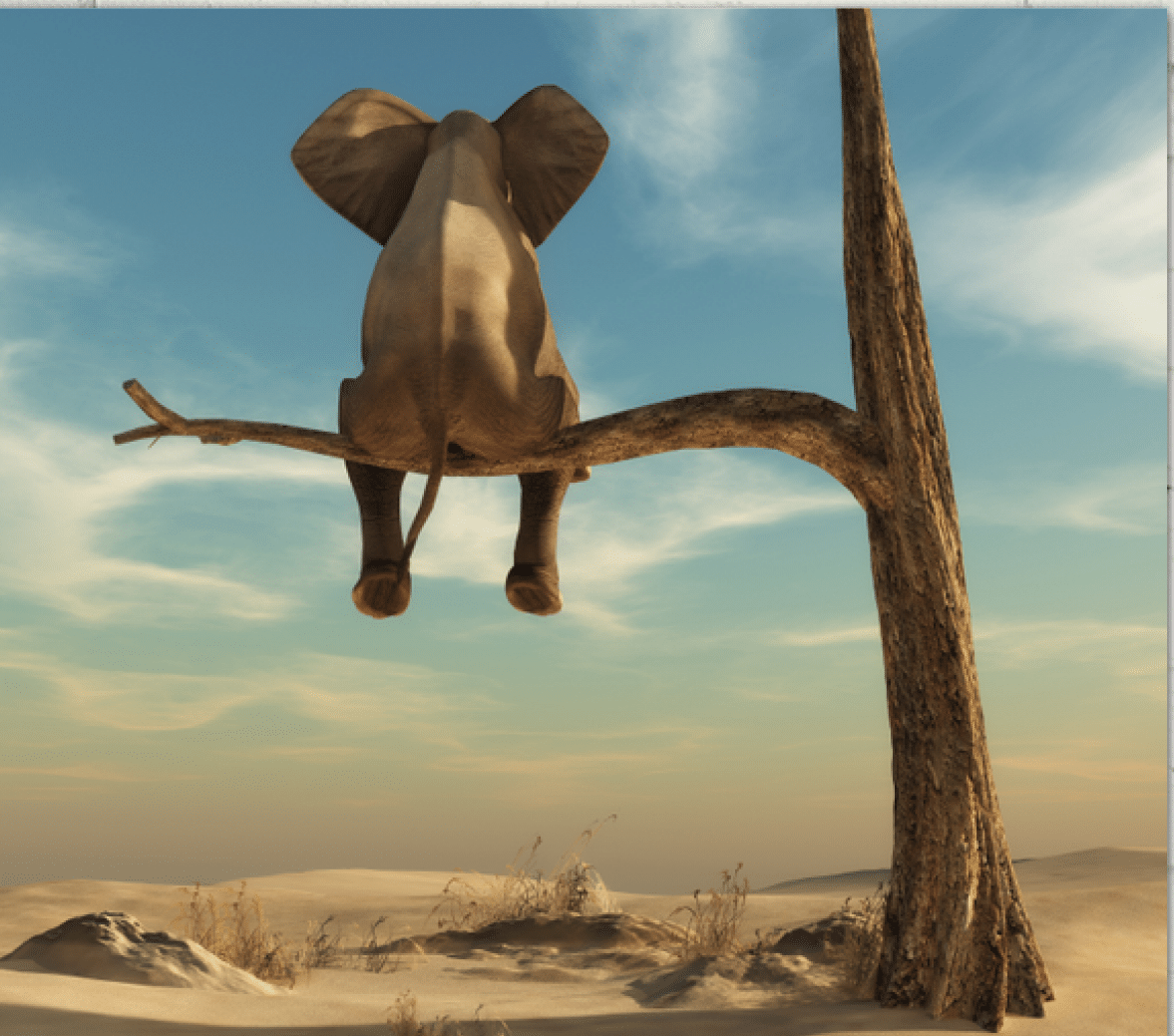 Simply Elephant on a Branch of a Tree

i am late# the write choice

The picture first look brings to my mind, first God of all Gods – Sri Ganesha, Om Ganeshaya namaha. Also known as  SiddhiVinayaka– bhagawan of ashtasiddhis, bestower of siddhis.  Among the ashtasiddhis, the one siddhi called “laghima”– means the ability to become lighter than air. Thus with this siddhi, Sri Ganesha can sit anywhere, even on verge/edge of branch of tree as shown above.

I want to share my bitter and nostalgic experience that is  relatable to the given theme picture, I guess : This occurred during my post graduation days- there was a colleague, one year senior to me, was not in good terms with me(GOK what was the problem?). I neglected the matter/ behavior for a while which only grew worse with time. Due to “fear” of being junior and did not want to meddle/mess the rapport, I kept quiet up to 3rd year. But the “fear” factor without my knowledge had grown bigger in me, from a size of tiny ant to a mammoth  and simultaneously my  “patience tree” got shrunken, reduced, withered to a thin dry, parched, pale twig. My “fear factor” was like an elephant sitting on a weak twig of patience, which could break any given moment. That’s what I was near broken, near to lose.

This was the consequence of my inaction, I did nothing / did not do right thing to tackle the situation. I could not see myself in a pitiable state anymore. I was not able to take it anymore. Co- incidentally that day which I can now label as the “day of action”, the “Jab we met” movie was playing on the TV. The scene: in which kareena does a phone call and releases her anger after which she feels lighter and better self – this drama sequence had Goddamn inspired me. I also wanted to have that wellbeing feeling, protect my self-respect so I had copied the scene, scripted, rehearsed and enacted the lines like an artist as per my plan and guess the outcome.. !

Action:- Immediately, though I was trembling, my voice shaking, totally nervous but this time I had gathered every bit of me, every cell’s strength and taking God’s name gave a call to that senior and  took full thorough class  and I hung up. You know what, that person did not cut the call or even had not offended me. I think my call had the effect of shock treatment / it must be totally unexpected. The outcome was –I was never troubled thereupon. Had I done this before? From where did I get so much courage /why did I bear/how did I do now, not then??

This was my small yet bitter experience(may be my karmic debt) but now I understand that only God- time, decides- and one has to wait for that time, sweet time to come as the saying goes “every dog has its own day” –a lesson learnt.

Further, gazing at the picture, it is like a stone that when drops produces ripples that merge into waves of ocean of mind hitting the shores of memories of the past, from which resurface the snippets, drifting along with the tides. Few such, 3 more, these are good memories:

1.The film Mahakavi Kalidasa–  as all know the epic great poet life had two completely different lives in a single life/birth, ie., the one life before(pre)  Kali maa’s darshan and other(post) life is history. In that pre darshan life, there was this scene where he is shown sitting at the edge of the branch of a tree and axing it near its attachment to the tree. The whole incident was observed by a minister(who had avenge on king),  took him to king and introduced him as highly intellectual pandit and got the princess married to actually a shepherd with low IQ. The day of marriage day becomes “ D-day” of the would be poet, when the shepherd literally due to purva punya was blessed with Kali maa’s darshanam and becomes the Kaalidaas, forever .

2. Next memory : Everyone knows this- Vikram aur Betaal story, where the betaal –ghost hangs itself  down from the branch of a tree. The king Vikramaditya every time(25n) did mammoth exercise of carrying the ghost on his back, while the ghost  narrated the  story and inevitably king had to answer to Betaal’s question and  ghost would fly back to the branch to hang down again. Until king discovered the plot of tantric with the help of betaal himself and killed the tantrik.

3.The other one, this just popped from my mind tree: Its Dasara festival  mood—reminds me – during virat parva the pandavas were to suppose to enter into 1yr agnaath vaas, all had decided their roles/disguised themselves and hideouts arranged. They secured  their weapons secretly on the branch of a Shami tree, packing them in the form of a skeleton, so that no one dared to go near them. The weapons layed there for a year, safe guarded by the tree(Aparajita tree).When agnaath vaas period came to end, on last day pandavas  unloaded their weapons from the Shami tree and fought war against kauravas and won, that was on Vijayadashami day.

In all above examples, including mine—all had succeeded.. when Sri Ganesha is here, why fear? He removes obstacles, He is symbol of Victory. The elephant always wins,elephantastic.

Lastly, the picture speaks to me loudly- one should not accumulate one’s karma to a mammoth size  and instead of laying there and wondering/wasting time  like elephant, one must be grounded/sensible. Next, unearth the self truth- the real purpose of life/birth, go deep within, to the roots of samsara tree/inner self. As Sri Krishna says- urdhva mulam adhah shakam, in Bhagavad Gita- the purpose of life is to know oneself/Vedas/GOD . To achieve this, one must now invert  this samsara tree- upside down, ulta that means ones roots/purpose is not down/earthly/mundane  but life purpose is to grow higher- know GOD/self realisation. Again, Mahabharatha was written by Sri Ganesha himself as dictated by Sri Maharshi VedaVyasa.


Login with Email
No Account? Create One
On a Serious Note
Lost In The Dance