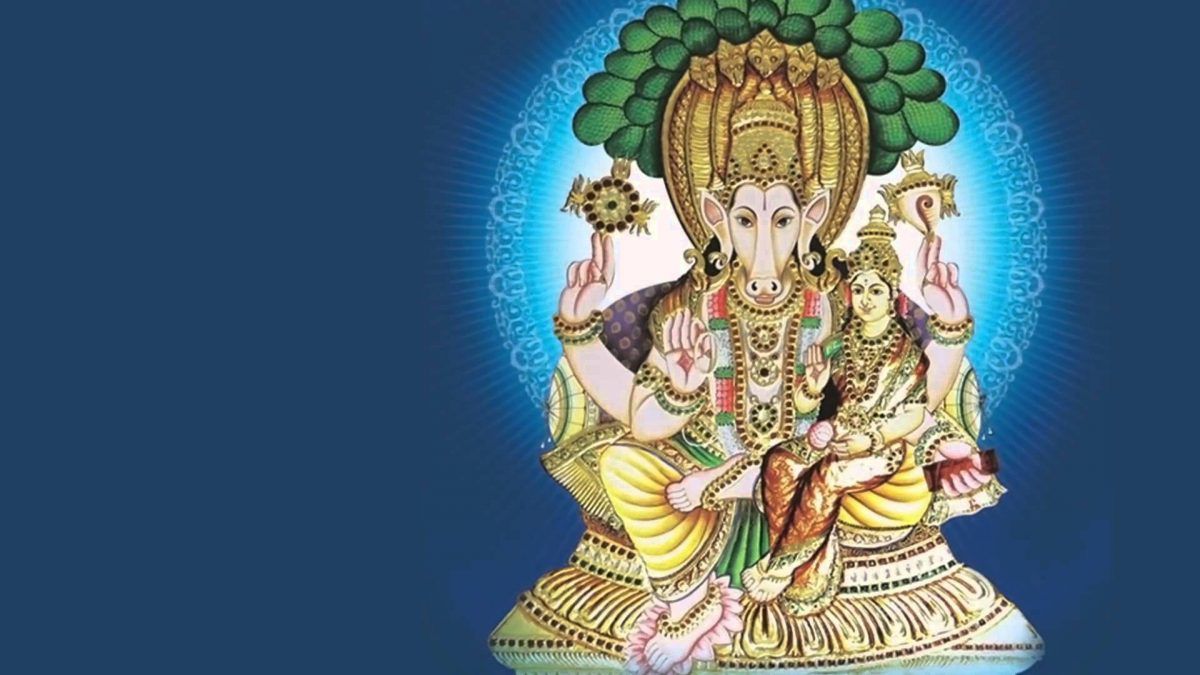 Namaskaram Swamigaru, namaskaram to all,

Sri Hayagriva, an avatar of Sri MahaVishnu, incarnated on this very day to protect Vedas, Shravana purnima- Sri Hayagriva jayanti. Thus in Vaishnavism, Sri Hayagriva is the God of learning, a bestower of knowledge and wisdom, Vedas personified. This is a partial avatar- a hybrid form -human body with a  face and neck of horse. Due to this face, He is also known as Ashvamukha, Hayashira, Hayavadana. He is sparkling brilliantly radiating pure spatik, crystal white in color, holding shanku, chakram, japamala and Vedas,  in  each of his 4 hands. Sri Lakshmi is seated on his left.

There are many stories regarding the incarnation, in all of them Sri Hayagriva kills the asura(s) and restores the Vedas back to Brahma. Thus fulfilling the very purpose of his avatar –ie., to protect vedas and  to maintain creation.

1. Mahabharata : Sri Hayagriva killed asuras, Madhu and Kaitabha arose from tamasic energy and stole Vedas. Brahma ran to Sri MahaVishnu for help. Sri MahaVishnu along with Sri Mahamaya tricked them intelligently by uttering to take a boon—the ego driven asuras brushed away saying they are ready to grace boon on god!?. This cost them their lives, as Sri Hayagriva asked them to get killed, as a boon. Thus Sri Mahavishnu is also glorified as Sri Madhusudana and Sri Mahamaya as Kaitabhi.

3. Sri Devi bhagavatham : There was  an asura/demon named Hayagriva(with horse face), son of sage Kashyap and Diti. He had got boon from Sri Devi after performing severe penance- to get killed only by the alike, ie., similar to his form. After attaining boon, his demonish acts reached the peak, he stole world and Vedas. So Sri MahaVishnu fought with him for 10,000 yrs, rested for awhile on his bow. In the meantime devas were performing sacrifice and gave offerings to Sri MahaVishnu. On finding the reason for his delay, without disturbing him, they sent termites to release the thread. The thread got cut off and severed the head of Sri MahaVishnu simultaneously. On praying to Sri Devi, she guided them to attach horse head over Sri MahaVishnu body according to plan, that was only way to slay asura. With the help of Ashwini devatas(twins, with horse face, deva’s doctors), they fixed Sri MahaVishnu’s head with horse face- – thus evolved Sri Hayagriva form and finished the work he had come for.

In this story all horse related beings can be seen—to complete list-one more horse faced, Sri Tumbura –gandharva, musician with tambura, but not related here. And one more asura by name Hayagriva lead to Matsya Avatar of Sri MahaVishnu. Uchchaihshravas, was a 7 headed horse in toto, born during samudra manthan. List of horse like personalities is nearly complete.

4. Kalika purana/Devi mahatyam : There was an asura named Jwarasura,  near Manikuta, Hajo, Assam. Sri Hayagriva killed him and took bath in the pond at Hajo. later  conducted severe penance for 1000yrs. It is said that, Sri Devi gave darshan to Sri Hayagriva, and gifted the eternal, the Sri Lalitha Sahasranamam.—at the same place, a Sri Hayagriva and Sri Madhava(Jagannath style idol of Matsya Avatar) temple  was built by king Indradyumna. Vishnu puran states during Matsya avatar also-Sri MahaVishnu, had killed asura, named Hayagriva who stole Vedas! That’s the idol of Sri Madhava/Matsya.

I agree completely for the perplexity here, why so many stories/versions of Sri Hayagriva incarnation? I myself am in the same confusion. After searching answer, the probable analysis made by great people, is  as follows—with time, numerous kalpas, manvantaras, yugas have passed. So, along with them countless avatars also have occurred. Each avatara appeared “N”  number of times—every time the story was not exactly same but with slight variations w.r.t place, person and time. Thus we have each purana presenting different versions that might have occurred during the course of evolution.

The Hayagriva Upanishad is a part of Atharvaveda, which is a conversation between Brahma and Narada Mahamuni. Here Sri Hayagriva is depicted as PURUSHA, cosmic form himself. Sri Hayagriva was considered as guru by goddess Saraswati devi, herself.

All the revered Alwars, esp., Sri Ramanujacharya, have worshipped Sri Hayagriva and sung mangalasasanam. Sri Vedanta desika used to have even dialogue with Sri Hayagriva, that intimacy was the reason to establish Sri Hayagriva in Parakala mutt, Mysore, abiding to the rules laid in pancharatra agamas. Saint Vadiraja Tirtha of Madhwa sampradaya would prepare prasadam called Hayagriva madde and place it on his head. Sri Hayagriva would come in the form of white horse and accept the prasadam, every day. Lot of miracles are recorded done  by the horse, Sri Hayagriva during that period.

Sri Hayagriva, is one of the devata in Panchamukhi Hanuman avatar of Sri Hanuman also.  All know the origin of Sri Hanumanji as Panchamukhi Hanuman in Ramayana. To put off the 5 flames, signifying the life of Ahiravan in paatala and save lives of Sri Rama and Lakshmana, he incarnated. To note, 5 faces are –Sri Hanuman, Sri Garuda, Sri Narasimha, Sri Varaha and Sri Hayagriva- all of them are kshipra devatas, ie.,instant serving and blessing devatas!!!. Sri  Raghavendra Swamy of Mantralayam worshipped him. The Panchamukhi Hanuman temple is built at his penance site. Throughout India many temples are constructed, interestingly one of the famous temple is located at Karachi!