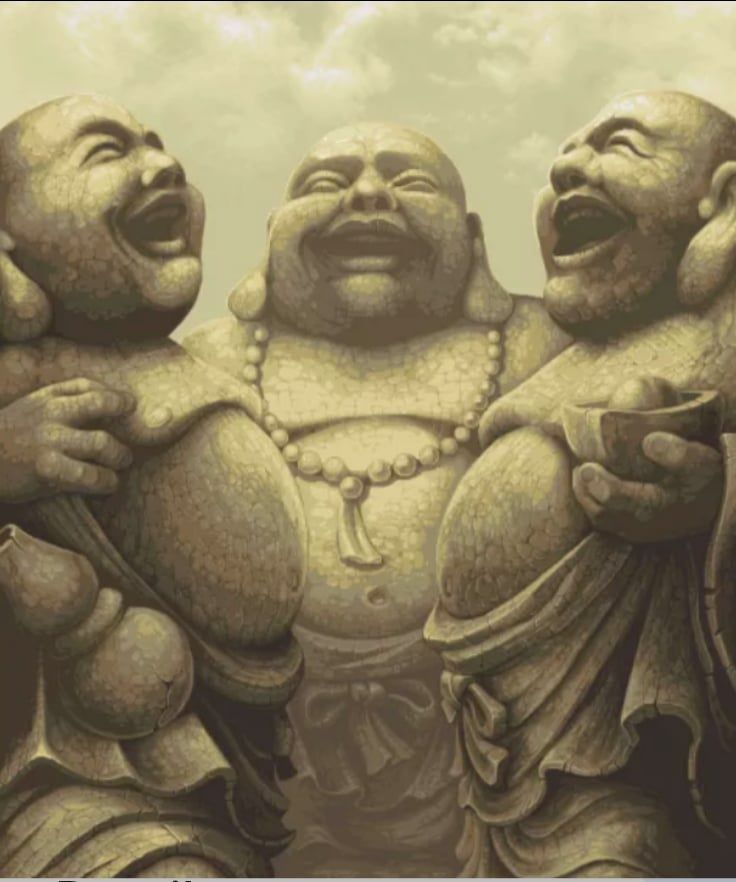 Once upon a time in ancient china there lived 3 old monks… they never revealed their names to anyone but in china they are known as the three laughing monks… they always stayed together and did nothing but laugh… they travelled to every Village and city spreading the joy of laughter… one day… the three monks visited a Village and stood in the center of its main square and started laughing… slowly people noticed them and couldn’t resist their temptation to laugh…The joy and laugh on the monk’s face was so contagious that the whole village started laughing… at that very moment they left the Village and moved to the next village… Their laugh was their only prayer and their teachings… they were respected and loved by everyone…. their teachings were simple… they taught that life is just a great opportunity to laugh as if they have discovered some kind of cosmic joke… many years passed… and on one fine day… one of the monk died.. everyone was shocked and sad… they came running to see the reaction of the other 2 monks… but for their surprise… the monks were not crying or mourning… instead they were laughing even harder… so one person from the crowd came forward and asked the monk why he wasn’t crying at all for his deceased  friend… and for only once… the monk responded and told “because yesterday, on our way to your Village he proposed a bet on who of us will beat the other two and die first and now he won, the old rogue! he even had a testament prepared” According to the Chinese tradition which was very similar to the indian tradition… the dead body must be washed and dressed in clean clothes before putting it on the funeral pyre. .. but the old monks advised the people to leave the old clothes of him because the monk was never “filthy”… his testament stated, ” i never allowed the filth of this world to reach me through my laughter”. soon everything was arranged and the ritual started… the fire was covering up his clothes… but to everyone’s astonishment suddenly fireworks of hundred colours went exploding up and down in all the directions and the people who gathered there also joined the 2 wise monks and started laughing with them.

Maybe the reason why we came on this earth was to experience only joy and to live, laugh and love! right?

His Last Days
Divine and Devotion