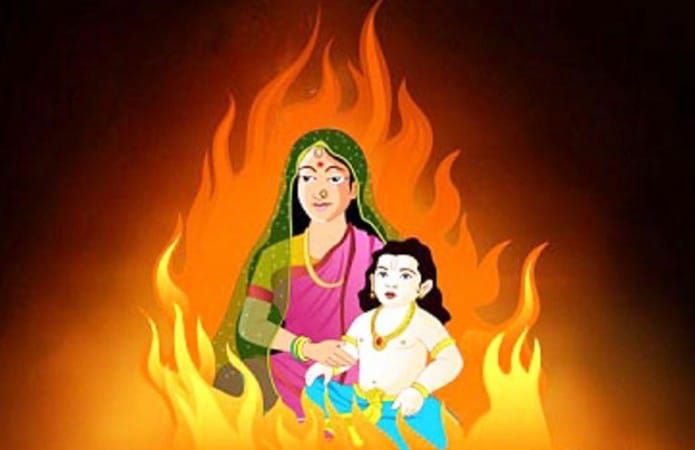 Prahlad was an ardent devotee of lord Vishnu and he was born to Hiranyakashipu. His father was a king and was against his son worship of Bhagwan Vishnu. So, he tried so many ways to dissuade him from worshiping Bhagwan but was not able to change the determination of his son. His son’s behavior created turmoil in his heart and anger started  building. The anger just grown with each day. And finally angry in rage he decided to attack his son by many methods.

Prahlad was attacked by soldiers, starved, bitten, thrown from the cliff and thrown in well but every effort went in vain. As it shows that when you love Bhagwan with pure heart. Nothing can touch you. Jisko rakhe saiyaan maar sake na koi. So, he could not be hurt by any way and this made him angry like anything. Finally in frustration, Hiranyakashipu decided to kill him in fire and asked his demon sister, Holika who was given a boon that she could not be burnt and can ignite fire in body. As Holika took Prahlad and pulled him on her lap and raised her fire. All during the time, Prahlad was reciting the holy name of Bhagwan and her magic failed on him. Holika faced the wrath of hurting devotee of Vishnu Bhagwan and was burnt in her own fire. She used the boon for doing the wrong to other being, so the boon became a cause of her death.

In today’s world also if God have blessed us with something we should it judiciously and help others. And also never hurt others sentiments and most importantly have firm faith in God that how bad the situations is, if God is with us nothing wrong can happen with us. So, my takeaway to home.

P.S. Thank you os.me family for reading and encouraging me. It really fills me with warmth and confidence. keep encouraging.