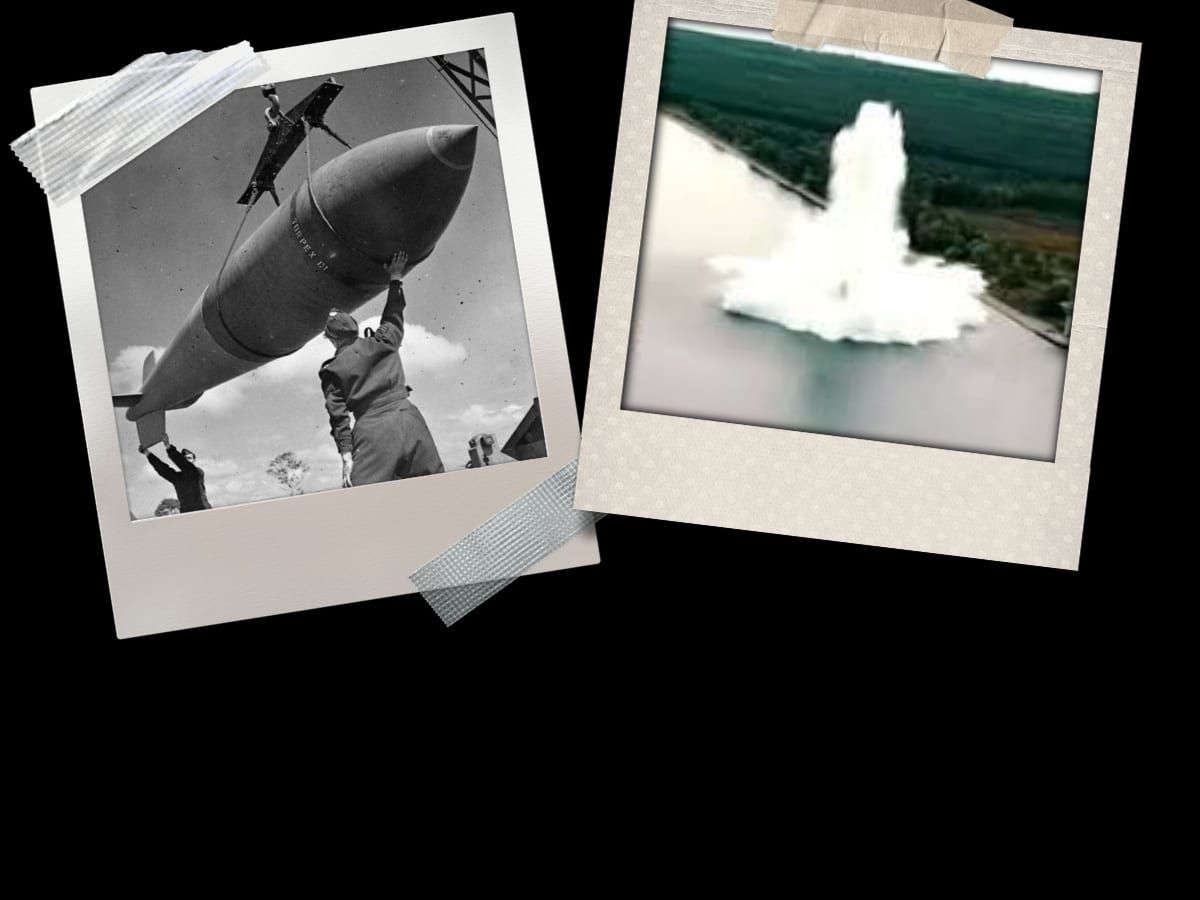 Tall Boy and the Wounds of the Past

If you are a history buff like me , you would have surely watched with fascination, the news today   (14th Oct 2020) of the biggest World War II Bomb exploding in Piast Canal, Poland . The Navy divers were trying to defuse the bomb instead it detonated causing  massive shockwaves and 750 people had to be evacuated

Tall Boy is a 5400 kg bomb filled with 2400kg of explosives . Also called the “Earthquake Bomb” , it was used against fortified structures which were otherwise immune . For example, incase of  the Saumur Tunnel attacked on 9th June 1944 – the Tallboy bored through the mountains and destroyed the sole rail tunnel in Loire . Tall Boys also destroyed Hitler’s home Bergof .This  Tall Boy though was dropped by the British Airforce on German ship Luetzow in April 1945 . Nobody knew why it didn’t explode  then .It lay there  under water 75 long years without causing a ripple . Found in September 2019 as the Piast canal was being deepened , the Navy sappers tried defusing it  but it blew up today  instead .

The emotional baggage and the wounds of the past are pretty much like Tall boys in our heart -heavy , full of bitter sharpanel and explosives and capable of destruction even decades down the line . As Sadhvi Vrinda ji mentions in her book The Prayer that never fails – she saw so many adults whose lives are wrecked and happiness destroyed by wounds they have been nursing from a troubled childhood. In psychotherapy too , psychologists look for the roots of the current problem in some childhood trauma , which lay deep within without a ripple, like a Tall Boy and exploded many years later in a different context .

One of my friends recently went through a painful divorce shortly after a fairy tale marriage which had been solemnized with a strong belief that they were a “forever together “couple .During the counselling sessions he discovered, that he was repressing his feelings from childhood when his parents were always at war with each other and he never got their love and attention . His own conflicts with his wife brought the memories of childhood flooding back and he again felt lonely and isolated- and ended up breaking a beautiful bond under the weight of the past.

In my own marriage , we have set a rule , never to rake up past instances as the baggage from the past just makes the current context irrelevant .The intense feelings generated by ‘past’ bomb ,obliterate any love and objectivity which would have otherwise solved the problem.

Why  do we nurse such Tall Boys in the center of our heart and how do we defuse them ? Why should such wounds fester and become the hell hole of negativity and bitterness ?

Swami ji has written a lot on Healing through Forgiveness and Mindfulness .Now , BL app also makes us aware of the response of lashing out – in the Stress Response Meditation . I wanted to share some of my personal insights as well

1.       Forgiveness : Practicing forgiveness as a virtue , makes you feel lighter and happier -and heal from any emotional wound you may have sustained . You don’t carry a baggage n your heart  even if the person who hurt you never repents . No Tall boys buried – no explosions-EVER !!

2.       Mindfulness : To be mindful of  our emotions and why they exist and to slowly deep breathe and return your mind to the present moment – diffuses any bomb- that may be simmering in the depth of your heart . When I find myself getting angry in a debate with my husband (Lots of us do, don’t we !) I breathe deeply and pause – thinking about what is it that’s disturbing me . As soon as my mind travels from the   battle ridden scenarios  it has created to the present calm – I find the steam just escaping from my head .

3.       Humour : This is a diffusing technology my husband uses most effectively . When you are laughing, you can’t be angry or upset – such is the power of laughter . Even a few seconds of it will blow away all negativity and sadness, like a gust of strong wind takes away all pollutants( ask the Weatherman in Delhi 🙂  . You don’t have to join a Laughter Club – just tickle or make light of the situation with your warring partner and the Tallboy tension is diffused. He uses it in the boardroom and at home with equal finesse . Sarcasm doesn’t help – it just adds fuel to the fire . But to use this strategy you have to be mindful (pt2) and recognize if some emotional bomb is detonating .

Let the Tall Boys be relics of history , let us not keep these Weapons of Emotional Destruction festering in our heart .  Lets make it the abode of peace and divinity instead .Jai Shri Hari .

My Rebirth
SNAKES AND LADDERS