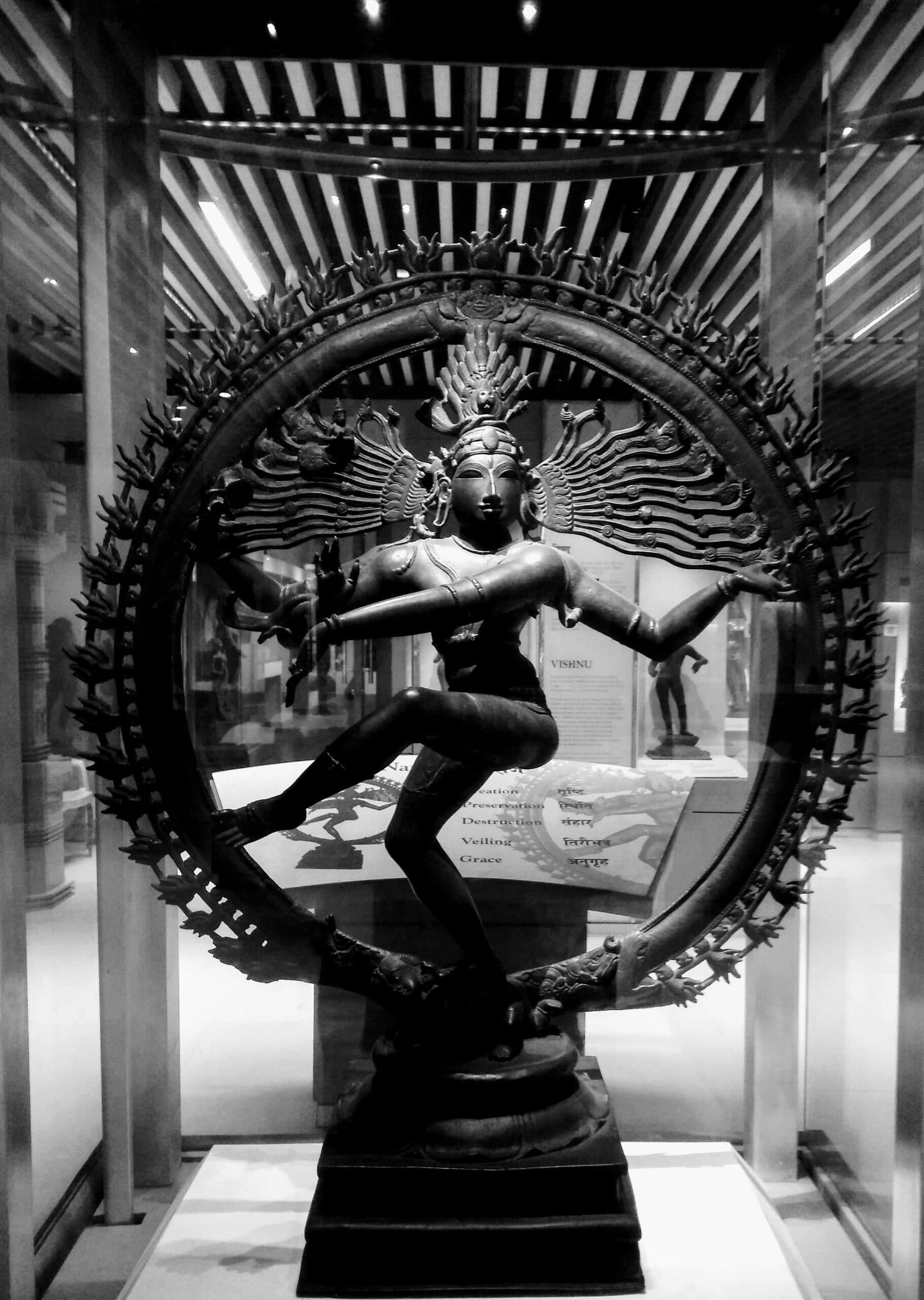 The Beauty of Shiva Tandava Stotram

The story, meaning and the poetic beauty of the magnetic Shiva Tandava Stotram

The legend goes that Ravans’s ailing mother, Kaikesi, could not visit the temple in Lanka. So, her valiant son thought of the unthinkable. He decided to uplift Mount Kailasha, the heavenly abode of Shiva, and transport it to Lanka. With unmatched strength, he almost managed to shake the mountain. Maddened by hubris, Ravana forgot that arrogance was not the way for a devotee. Lord Shiva pressed down with his little toe, trapping Ravana under the mountain. Sense prevailed over the ten-headed asura king. Realising his mistake, he spontaneously composed a hymn praising Lord Shiva and pleaded for moksha. What a fantastical story! An anti-hero, breaking into a well-composed Sanskrit hymn in a moment of crisis. Even more impressive is that this hymn still exists, known to us as the Shiva Tandava Stotram. 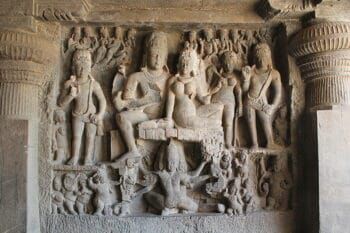 Ravana also gave musical accompaniment by fashioning a veena from his hand, using his tendons as strings. Interestingly, a stringed instrument called ‘Ravanahatha’ is still played by street musicians in parts of India and Sri Lanka. 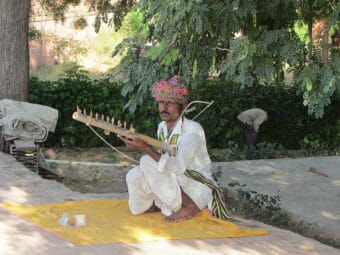 I would encourage you to listen to the rendition of Shiva Tandava Stotram by Shankar Mahadevan before you read on. 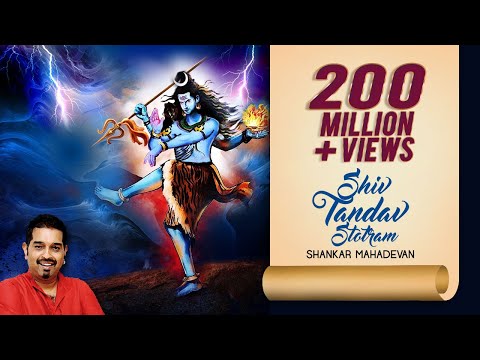 The Shiva Tandava Stotram attracts the listener—a devotee or not— with the sheer musicality of its rhythm. Hear it once, and you will soon be playing the hymn on a loop. Even if you do not understand Sanskrit and the intricacies of the composition, the sound of the words will leave you enchanted. Consider the line, “डमड्डमड्डमड्डमन्निनादवड्डमर्वयं ’(Verse 1) where the repetition of the word ‘damad’ suggests the wild resonance of Shiva’s damru as he sways in ‘Tandava’(the divine dance).

Similarly, in the line “धगद्धगद्धगज्ज्वलल्ललाटपट्टपावके” the words (dhagadh, dhagadh) imitate the sound of a raging flame— a reference to Shiva’s third eye that burns on the surface of his forehead. For those interested in poetic devices, ‘dhagadh’ and ‘damad’ are examples of ‘onomatopoeia’ or imitation of sounds by words. It makes the experience more immediate.

The Stotram comprises 18 verses, each a quatrain (four lines). It employs the poetic metre of ‘pancha chamrama’ with repetitions of one short syllable followed by one long syllable. In layman language, pick up any line from the hymn, and you’ll find the following rhythm:

This poetic metre, also known as the iambic octameter, provides a unique rhythm to the hymn. You will find it impossible to sing or recite the Stotram if the meter and stresses are not maintained. Now, why is the conversation about the metre meaningful? The use of a poetic metre enhances the musicality of even a prose text. William Shakespeare’s sonnets and plays are composed using the iambic pentameter, making even the routine dialogues and prose seem musical and poetic. (If music be the food of love, play on. Twelfth Night)

The Shiv Tandav Stotram is Ravana’s intense call to his deity. The uninhibited expression is borne of someone in the state of trance—the entire hymn bubbles with exquisite imagery. In the first verse, while describing Shiva’s beauty, Ravana observes that the forest like matted locks—dripping with the water of the celestial river Ganges—swirl madly when he dances in Tandava.

Sometimes, the image is regular and close to nature. In verse five, he seeks eternal prosperity from the one who holds the friend of ‘Chakora’ birds on his head’.

The ‘friend’ indirectly references the crescent moon on Lord Shiva’s head. Isn’t it amazing that the image of chakora birds fascinated by the moon has endured in literature since Ravana’s era? Remember the old Bollywood song ‘Chand ko kya maloom chahta hai use koi chakor’? Some images are deeply entrenched in our culture and get passed on through literature. When distanced from the native languages, we can no longer claim the language’s rich imagery and imagination.

Meaning: Ravana says may we be surrounded by prosperity by the one whose neck is draped by a serpent; the Lord who is darker than Kuhu—the darkest new moon night or Amavasya—which is as dark as the foreboding darkness of a group of newly formed rain clouds. This is just one example; Shiv Tandava Strotram is replete with exquisite compound word arrangements.

The Revelation of the Many-layered Ravana

Through the Stotram, the readers witness Ravana as an ardent devotee, lover, observer, scholar, poet and yogi. In Verse 12, Ravana begins by asking a rhetorical question: ‘when or how will I become eligible to worship Shiva? He immediately realises that he must observe equanimity. This is a far cry from the arrogant Ravana, who was ready to uproot Mount Kailasha. The Stotram, thus, gives a beautiful insight into the many layers of Ravana’s character. He is not just a vicious demon king from Lanka. He embodies the conflicts and dichotomy of an ordinary human.

It is interesting to observe Ravana’s utterance in the 14th Sloka, where he is in a self-indulgent mood, a poet’s pride for his work, as it were. He suggests that one can attain eternal purity by reading, memorising and chanting the best among the best of hymns. No points for guessing which hymn he is referring to.

One can find echoes of the same sentiment in the poetic lines of another genius who comes many ages later— William Shakespeare.

So long as men can breathe or eyes can see,

So long lives this, and this gives life to thee.

(Sonnet 18: Shall I compare thee to a summer’s day)

Both Ravana and Shakespeare highlight the eternal nature of their poetry.

The Shiva Tandava Stotram is an extremely popular poetic piece. Its verses are often used in background music to emphasise anger, justice, or to highlight the aspects of Shiva in a protagonist. In recent years, Indian Film director S. S. Rajamouli used the verses and recreated the Ravana myth in one of the epochal scenes from his movie (Bahubai: the beginning). The protagonist uproots the Shiva lingam and places it under a waterfall for the convenience of his old mother. Rajamouli plays around with popular myths and legends, retelling and inverting some of their older aspects. Is he then making a larger point by getting his protagonist to lift the Shiva Lingam? Is he blurring the lines between Devas and Asuras or simply positioning his hero, aptly called ‘Shivudu’, as the embodiment of strength? And the entire sequence unfolds with the Shiva Tandava Stotram playing in the background. Shivudu is a Shiv Bhakta, and so was Ravana—the ultimate Shiva Bhakta. Rajamouli melds myth, poetry and music to his advantage as a storyteller. Nothing could be more disheartening when the only thing viewers observe is the brawny physique of Prabhas as Bahubali. Nevertheless, they also feel the magnetic pull of the Shiva Tandava  Stotram chant in the song. Imagine the power if one could unlock the meaning too!

The Shiva Tandava Stotram is a work of art—a cultural legacy. In his composition, Ravana has created a compendium of exalted praises that have and would spring forth in the heart of Shiv devotees for aeons. Are we ready to receive it?

(To write this article, I have gone through the explanation of Shiva Tandava Stotram. I am deeply grateful to The Sanskrit Channel for an in-depth and lucid explanation of the hymn. Any mistakes in the understanding are entirely mine.)

Magic of Spring
A River Flows