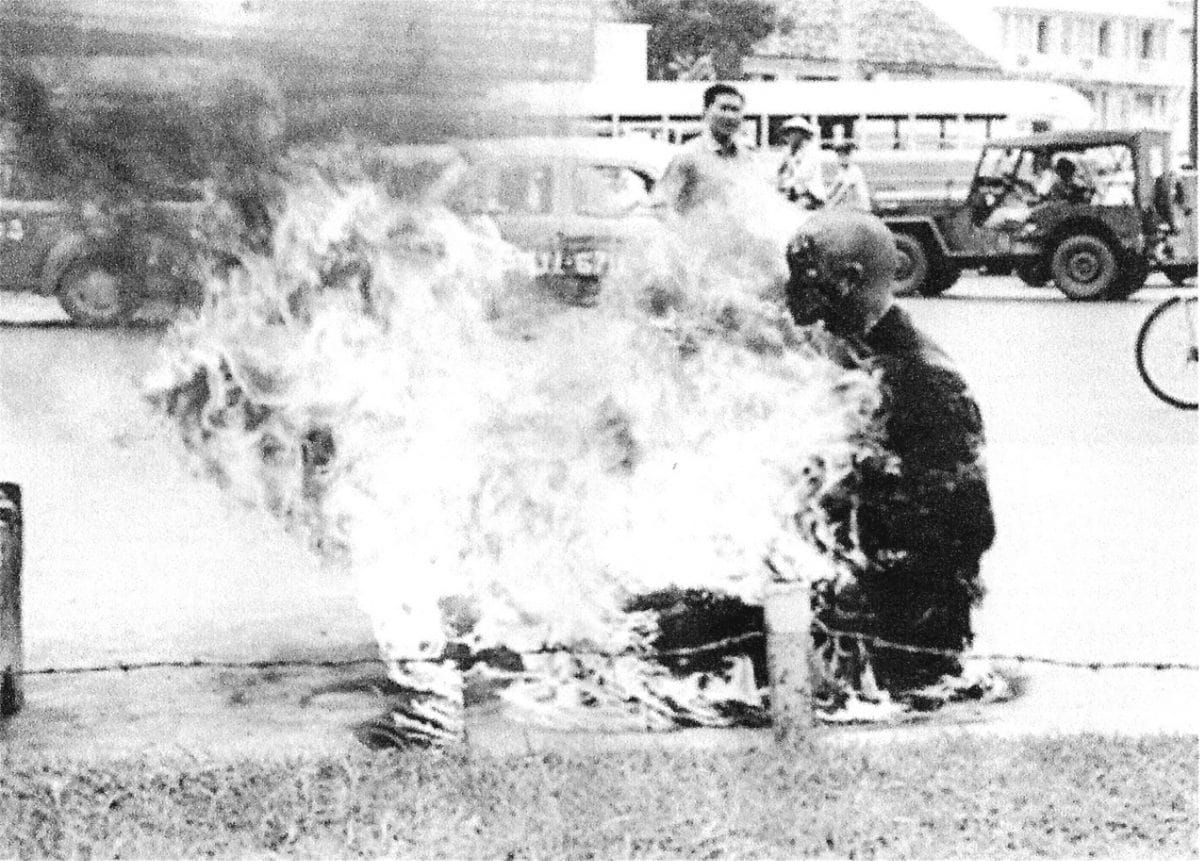 Revisit the Vietnamese monk, Thich Quang Duc’s self-immolation on 11 June 1963 and what it tells us about power of meditation.

To understand the immeasurable, the mind must be extraordinarily quiet, still.

Today, I am going to talk about rare, unknown and totally unexplored topic, never ever discussed on this platform: Meditation

On a serious note, we all understand importance of meditation and ‘perceive’ that helps us to control our mind. Infinite examples abound all around us, right from that of Swamji to many others, on how meditation has helped them transform themselves, through their thoughts, deeds, words and action.

But among these examples, one example in history, which still stands out as unique is that of the Vietnamese monk, Thich Quang Duc’s1 self-immolation on 11 June 1963. As recounted on Wikipedia:

Thích Quảng Đức ( 1897 – 1963)  was a Vietnamese Mahayana Buddhist monk who burned himself to death at a busy Saigon road intersection on 11 June 1963. Quảng Đức was protesting the persecution of Buddhists by the South Vietnamese government led by Ngô Đình Diệm, a staunch Roman Catholic. Photographs of his self-immolation were circulated widely around the world and brought attention to the policies of the Diệm government.

John F. Kennedy said in reference to a photograph of Quảng Đức on fire, “No news picture in history has generated so much emotion around the world as that one.”

Malcolm Browne won a Pulitzer Prize for this photograph of the monk’s death:

While any such act of self-immolation or suicide, regardless of the reason why it was committed should rightly be condemned, and no way one should celebrate the individual as a hero, the reason I wrote this article and the reason why this event was so talked about for so long, was the stoic expression on Quang Duc’s face and the stillness, when fire was raging all over his body. It was the power of mindfulness and thousands of hours of meditation that enabled him to have this kind of control on his body and withstand the fire.

David Halberstam, an American writer, journalist and historian wrote about the incident:

“I was to see that sight again, but once was enough. Flames were coming from a human being; his body was slowly withering and shriveling up, his head blackening and charring. In the air was the smell of burning human flesh; human beings burn surprisingly quickly. Behind me I could hear the sobbing of the Vietnamese who were now gathering. I was too shocked to cry, too confused to take notes or ask questions, too bewildered to even think … As he burned he never moved a muscle, never uttered a sound, his outward composure in sharp contrast to the wailing people around him.”

In various articles and research material about the incident, scientists have discussed about the power of mediation and how it was instrumental in not only Quang Duc’s decision to go through the act, but to stay calm as his body withered into ashes.

There is wealth of literature on how basic breathing techniques and meditation can alter cortical structures with very little training. Structural and functional MRI have revealed the anterior cingulate and insular cortex are altered in functioning due to meditation and mindfulness practice. The research into mindfulness and expert meditators gives a greater understanding into how a monk like Duc was able to commit such a powerful behavioural act, becoming the monk on fire.

It’s incidents like these, that reinforces the belief that ‘being in a meditative state‘, regardless of the activity that you are performing, can help you overcome the toughest of challenges and go through the harshest of pain and trauma.

Meditation is like a gym in which you develop the powerful mental muscles of calm and insight.

I have meniscus tear in both my knees. As I had decided not to go for a surgery, when I had contracted the problem in 2019 April (I did the Everest Base Camp Trek in May 2019 with brace in my left knee), I had to look at ways of natural healing, which involved strengthening my muscles around the knee and mediation. As many runners swear by running as meditation, I concentrate on the instances where I feel the pain in the knee when I am out for a run. At that instance, I analyse the way my foot is landing on the ground and tweak it slightly, to see if the pain will reduce or go away completely. In a 10-15k run, I have one or two such instances. Interestingly enough, the longer the run, the less frequent are these instances. The logic is simple, once the mind communicates to the leg, on the right stepping, the pain either ceases to exist, or ceases to have any importance in the mind. It’s as simple as that.

Running and meditation are very personal activities. Therefore they are lonely. This loneliness is one of their best qualities because it strengthens our incentive to motivate ourselves.”
― Sakyong Mipham, Running with the Mind of Meditation: Lessons for Training Body and Mind

The learning for all the non-runners here is simple. Life has its set of problems for everyone. Most of the time, these problems come completely unannounced. These are all meant to give pain and cause worry. It’s totally now on the mind to decide, to get daunted by the challenge, to worry over the consequences or to feel excited about the opportunity that God has bestowed on oneself. I will end with this beautiful quote from the famous gold medal winning Russian gymnast, Nadia Comaneci:

“I don’t run away from a challenge because I am afraid. Instead, I run toward it because the only way to escape fear is to trample it beneath your feet.”

What is blue light on agna chakra during meditation

During meditation, when I close my eyes I see blue light , like a halo, like a small circle on brow plexus.

What does it mean?

It could be anything. The crucial thing is, it's a sign, a signal that you've been doing something right.

Feel free to enjoy it a bit if it seems pleasing, and then move on. Onto the next experience, to the next milestone.

The road is long
But its width is narrow
The seeker can rest
Enjoy the shade and fest
But relax not until it reaches
To the place where the road ends
Of the pleasures, wishes and endeavors.

SANT S asked in Self Discovery 6d ago