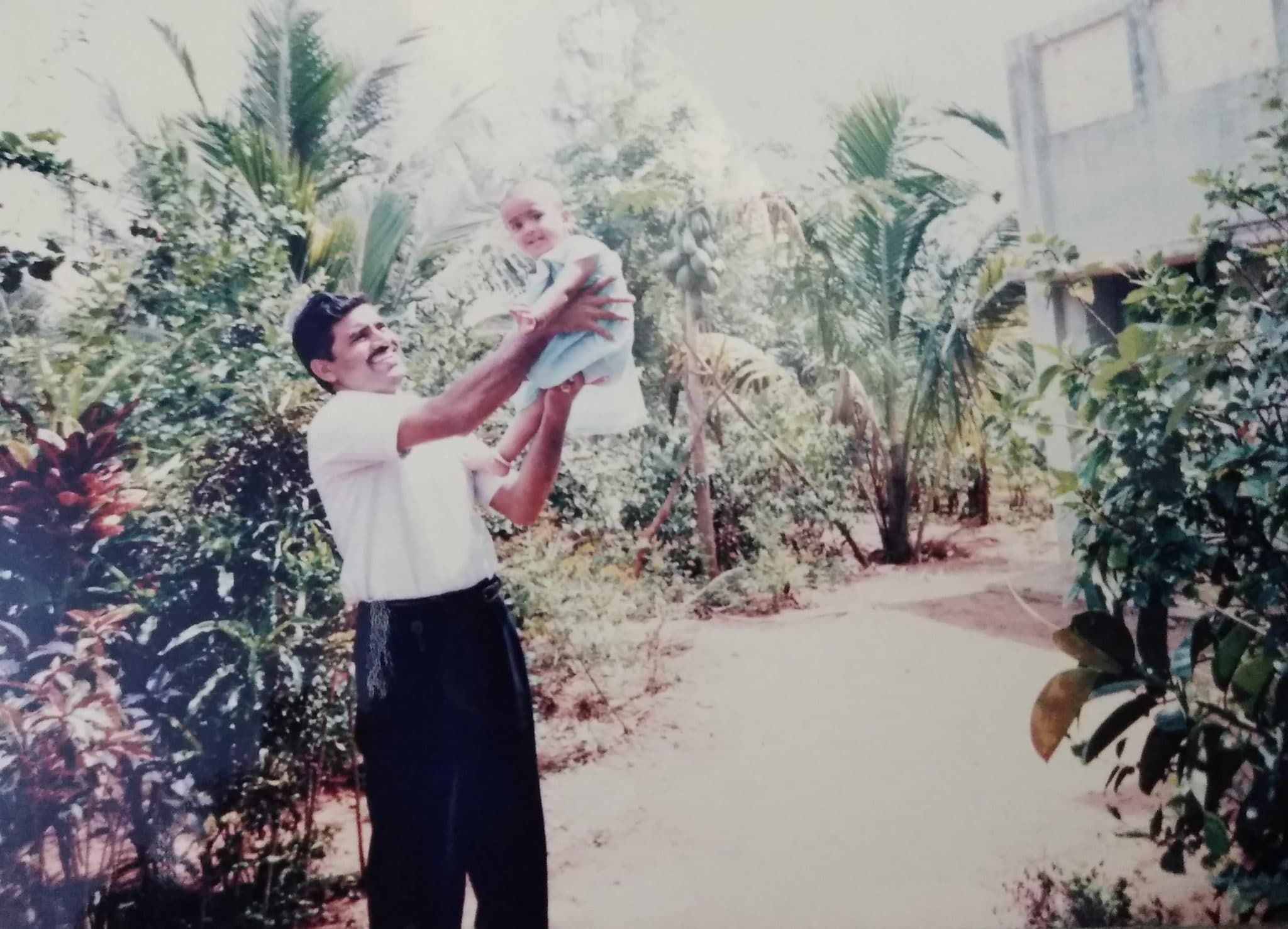 ...and the ongoing healing

A woman’s first hero is always her father.

Of course we’ve heard this. And truly, to a little girl (or boy) whose world revolves around her parents, her toys and her ability for incessant chatter and tantrums (the terrible twos are very much a thing :)), her father appears larger-than-life – he can lift her and swing her around like she’s but a feather, he can tickle her until she’s breathless with laughter and he can rock her to sleep when even her mother can’t.

A father’s arms feel like the safest, coziest place in the entire universe. Nothing can enter the little sanctuary her father’s protective circle, with his sometimes-soft-sometimes-rough arm hair, provides. The world can stay outside while she revels in his scent, his wide chest with his strongly beating heart and the soft kisses he peppers on her hair, her forehead as he lovingly cuddles her.

A father’s hug is home. When he lifts her off her feet as she squeals in giddy delight and squeezes her until she’s sure her bones are about to snap, she understands what a bear hug really means – and her father is the only one who can fight off the bears and the other frightening creatures that threaten to attack her safe space. He stands before her, metaphorical, but to her very literal, knight in battle armour, sword out, ready to kill anyone who dares hurt his little girl.

Growing up, I felt this was something I never experienced. Early on, my mother told me, “You seem to live with your head in the clouds, Divya. Come back to the ground once in a while.” It used to confuse me enormously – what did she mean? Why was my head in the clouds and not the rest of my body? Yes, I liked to day-dream – but didn’t everybody?

Apparently not. My friends never could understand why I’d often zone out during conversations (a habit I’ve retained till date :)). One moment, I’d be there in the conversation with them, laughing or chatting and the next, I would have gone completely silent. In my head, I was done with the chatter and was focusing on other pleasant things instead – dreaming about the day Dhoni would decide he’d had enough of his wife and hunt me down to profess his deeply passionate love for me (much more unlikely now, I know, given Ziva and her darn adorability factor); dreaming about the time I’d be backpacking through Europe over vales and hills, bathing in waterfalls and camping out in abandoned hillside huts where I’d meet a mysterious stranger with an irresistible accent and we’d of course fall madly in love, get married on the very hill where we met and produce two adorable babies who’d have mixed-race names like Sasha or Nikita; dreaming about the moment I’d have the courage to talk to the popular girls in class who’d then be utterly charmed by my witty banter and initiate me into their exclusive group with much pomp and fanfare; dreaming about the time I could grow up and go out and find my place because I was so special that I’d definitely change the world with my mere presence; dreaming, dreaming. Dreaming.

Mostly though, I dreamed about my father.

I dreamed about how he would love me like how I wanted him to love me and not in the way he knew how.

My father was (is) a reticent man. His sense of humour is terrific and he lives his life peacefully, simply and in utter honesty. He taught me to walk the path of truth, integrity and sincerity even before I understood what it was. He is the kind of man who, if he were to take a printout for personal use at his workspace, would leave a rupee behind to pay for it because he’d used office paper (and this really happened).

What did it mean to him then? When I was young, I never found out.

And it broke my heart. I longed for his hugs, I longed for physical touch: that was the way I wanted to express affection and that was the way I wanted to receive it. But middle-class South Indian small-town men simply weren’t built that way then. He grew up in a family where birthdays were never acknowledged because they just weren’t that big a deal. Spending quality time together for them meant a dinner around the table with amma serving hot dosas straight from the tawa.

To a man who grew up in a family that worked very hard for their day-to-day living, any expression of affection was a luxury. And these luxuries, he didn’t know they existed.

So, how could I expect them from him when he didn’t even know, when these expressions made him deeply uncomfortable?

Ah. That’s the beauty of being human – trauma forms in longing and many a time, that burden of longing is placed upon a person who not only doesn’t know how to handle it but is also just not living the way we are. It’s like asking a goat to become a seahorse – there’s just no connection. Not one.

The more I longed, the more I fell into grief. It led to the inevitable arguments, the fights and the tears: not because I confronted him about it, oh no. The fights were about other things because that’s the way – when one isn’t willing to look at the real issue head-on, every other issue, petty or otherwise, is magnified.

“Do you even understand why spending time with family is important?” I remember screaming at him during one of our more spectacular fights. “You are never around! You’re always working, either in the office or at home. Do you even remember that we exist?”

I broke the cardinal rule of therapy – never say always and never 🙂 But I was 16 – so I’m reaching across the space-time continuum to cut myself some slack.

“Who do you think I’m working for?” he yelled right back. “I’m not doing it for myself. I work for you, for your mother, for your brother so that you can lead a peaceful life and do whatever you want to do without worrying about money.”

Looking back now, I see what an absolute gift we were given – not once did our family ever want for anything and I had a financial security cushion that allowed me the luxury of searching for what I really wanted out of life. We were never rich but we were comfortable enough that worry about a lack of money didn’t percolate down too much to my brother and me.

But to a sad, lonely and unhappy teenager, none of it mattered. All I wanted was my father. And I didn’t have him.

I even remember outlining to him once, in desperation, the benefits of spending time with family and why it was important to have that strong bond.

It took me years to realize that he already was spending time with family in the best way he knew how – by providing for us and always, always ensuring that we never wanted for anything. However, it was not the way I wanted to be loved. And so, I dismissed what he was giving as not good enough because it didn’t fit my framework.

My head was in the clouds, dreaming.

The inevitable consequence of not having my feet on the ground manifested itself in the form of relationships. When I was 17, I fell in love for the first time – with my best friend’s boyfriend. The reason was simple – he was the first male in my life to show me affection, verbally and physically, and I melted. The bottled-up yearning I had carried for as long as I could remember started to spill over and the results were naturally disastrous.

Daddy issues. It’s a common enough phrase in urban India today. But it isn’t just daddy issues. We all carry unresolved trauma and blocks in us that have wedged themselves deep enough that to pull them out in one shot will cause copious bleeding and scarring. They need to be removed, slowly and steadily, a little bit at a time – scraping, brushing, tugging, gently sliding until they’re all the way out and ready to be tossed into the ocean of karma we’ve just crossed, never to look back at them again.

The father wound and the mother wound are possibly our deepest and most traumatic. When they’re shaken loose, a large part of us is ready to be healed.

My relationship with my father today is in a comfortable space because of one reason only – acceptance. I have accepted that he is the way he is and it is made all the easier by the fact that I’ve learnt about why he is the way he is. More importantly though, he has accepted that I had unfulfilled desires which didn’t see the light of day when I was growing up. So, now, when we meet after some time apart or I’m leaving, we lean in for a hug albeit extremely awkward 🙂 But that’s enough – knowing that he’s making the effort just because he knows what it means to me is enough.

It’s the way I wanted to be loved. And he’s given it to me.

And we will keep doing everything possible to ensure the other person is happy.

116 comments on this post. Please login to view member comments and participate in the discussion.