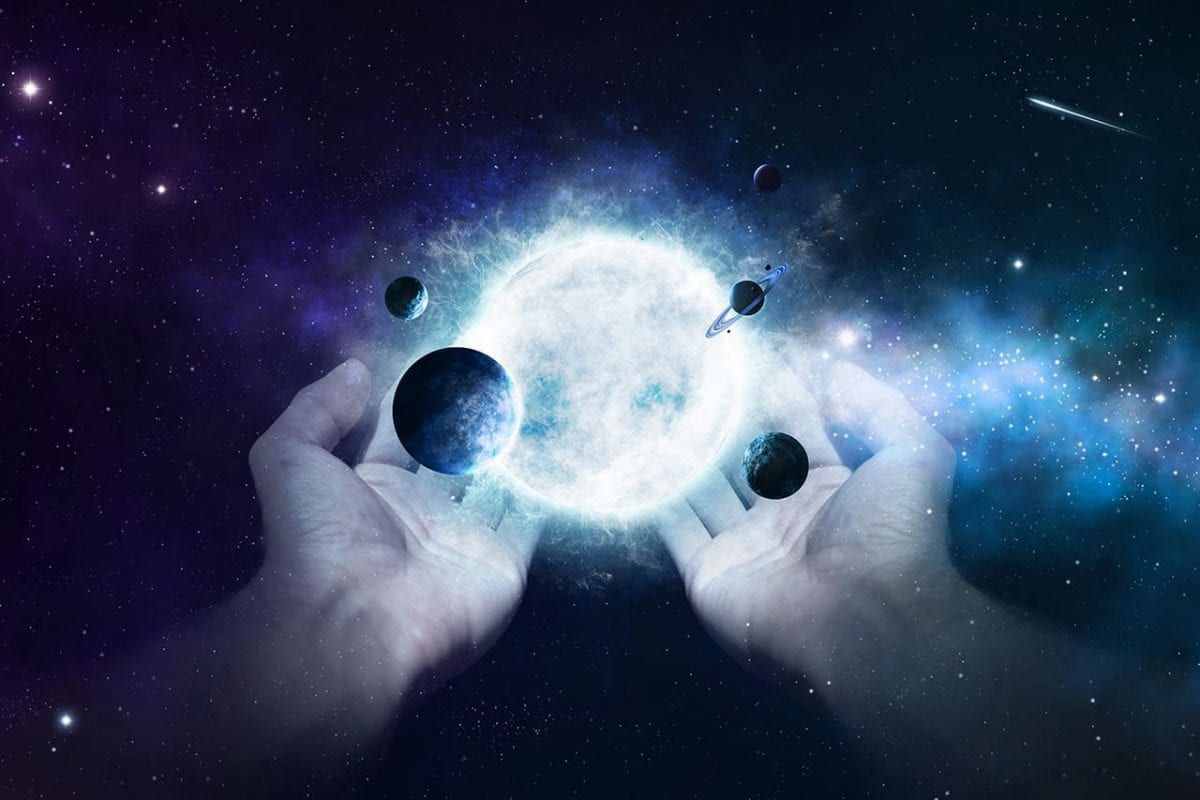 Commentary on The Grand Design of Universe: Part 2

Did God create the Universe or did it create itself?

Up until a century ago, the question “Did God create the Universe or did it create itself?” invoked one of the many mystical reasoning that various schools of thought around the world have proposed. Science and Philosophy, have both attempted to answer this question and have formulated elaborate theories but a unified, holistic answer wasn’t available for a long time. This was until the theory of the ‘Big Bang’  (a term coined by Sir Fred Hoyle) was elaborated which provides an alternative to the ‘Steady- State Model‘ and is better geared to incorporate philosophical reasoning.

To describe in short, the Big Bang theory is a cosmological model of the observable universe from the earliest known periods through its subsequent large-scale evolution to its current state. The model describes how the universe expanded from an initial state of extremely high density and high temperature,and offers a comprehensive explanation for a broad range of observed phenomenon.

Clouds of gas simply do collapse into giant balls in space, that’s just what happens. The balls burn with a ferocity that lights the heaven’s, and they form massive and beautiful galaxies that spin on their axes like huge wheels in space, all this just happens controlled by laws that we can understand and analyze. We have discovered how laws of nature acting on the mass and energy of the universe started a process that would eventually produce us.

Hawking describes how the answer to our question can be described completely within the framework of our understanding of natural physical laws, thereby eliminating the need to invoke the sentiment of there being a ‘Creator’. The initial state of the universe before the ‘Big Bang’, is understood by modern theories to have been a singularity (Black hole in simple terms).

Inside the black hole itself, time doesn’t exist. And that’s exactly what happened at the start of the universe. The laws of nature tell us that time itself must come to a stop in a black hole.

Since time itself began at the moment of Big Bang, it was an event that could not have been caused or created by anyone or anything. We have no need to be superstitious or fearful of god because the universe operates perfectly well without them.

Not just Stephen Hawking but many of his contemporaries have worked on theories that proposed a similar hypothesis, i.e. the random nature of the conception of life and its surrounding universe.

Although it is evident that over the last few decades a lot of work has been done in the area of cosmology, it is not the case that ancient scriptures do not cover this subject.

With the coming into being of the dynamic universe, the adaptation of the primordial matter was made in the primeval activities.
Thus began the changes in the atomic composition of the matter.
In this colossal cosmic sacrifice, substances to sustain life were produced as well as vegetation, grains, fruit, flowers and therapeutic substances that increase both energy and life span.
This made it possible for animal life to thrive.

The seers of Rig-Veda viewed a human being itself as a symbol of the Supreme Divine. This is the natural meaning of the Purush Sukta. It is indicative of the truth that each human being’s structure mirrors that of the cosmos or the matter from which it evolved. Similarly, the individual mind also has a corresponding relationship with the cosmic one. It demonstrates in no uncertain terms that the structure of a human being replicates that of the macrocosm from which it evolved. (ref.)

This is exactly what Carl Sagan, the famous cosmologist said,

“The cosmos is within us. Some part of our being knows this is where we came from. We long to return. And we can, because we’re made of star stuff. We are a way for the universe to know itself.”

Hindu mythology revolves around the concept of the One Brahman (Advaitam) — multiplying into the many, manifesting as the world, then collapsing back into itself. This cycle of cosmic creation and destruction is called Lila, the play of god.

Further, as per scriptures, the dimension of the material world is different from that of the spiritual world. Physics indeed has appreciable substantiation of how the material world operates, but the reality described in the ancient texts is beyond that.

For example, From the general laws of physics, the dimension of Time did not exist at the moment of the ‘Big Bang’ and before. But Lord Krishna mentions that he himself is “The Time” (as per below verses in Bhagwat Gita) who is responsible for creation, sustenance and destruction of the material world.

I am Prahlada among the demons, among the reckoners I am time;
among beasts I am the lion, and Vainateya (Garuda) among birds.

The Blessed Lord said I am the full-grown world-destroying Time, now engaged in destroying the worlds. Even without thee, none of the warriors arrayed in the hostile armies shall live.

The methods and prayers prescribed in Sanatana Dharama show a way to not only worship the creator in his majestic form but also as the universe, its constituent matter and most importantly the “Time” itself.

That is also the essence of the Purusha suktam in Rig Veda, or Shri Rudram (Sanskrit: श्रीरुद्रम्,) in Yajurveda (Sanskrit: यजुर्वेदः), worshiping the universe and its constituents as part of the creator.

Stephen Hawking is absolutely right when he says that we have no need to be superstitious or fearful of God. Sadly, somehow the world has arrived at that.

Whether or not the Universe can operate without a creator has been and will be the subject of a substantial chunk of all human philosophical discourse.

As far as I am concerned the creator himself is the universe. We worship the universe itself as him. The various theories either scientific or spiritual give us a direction to think. One should not condition one’s mind on proposed conclusions but spend time on contemplating and experiencing the reality. Only then one would be in a position to arrive at a logical explanation to questions like these.

Eventually, as Swamiji says you need to Discover your own Truth.

Disclaimer : The content of this write up has some inspiration from Stephen Hawking’s work. The interpretations quoted here are solely down to Author’s understanding. For details it is recommended to go through the original works of Stephen Hawking. The translations and Sloka’s from Upanishads have been taken from sources indicated.